Asthma is a common problem in children — nearly 10% now have it — and the number is increasing. Researchers are not sure of the reasons for this steady increase, but decreased air quality, lower activity levels among children, and an increase childhood obesity have all been implicated. Whatever the cause, it means that millions of American children take medicine for asthma. A significant number of these children end up in the PICU for a severe asthma attack.

As I speak to their parents, it is clear that more than a few parents have only vague ideas of how the different types of asthma medicines we use work in their child’s body. This is an important subject, since using the medicines correctly is the best way to keep your child out of breathing trouble, and to use them correctly it very much helps to understand how they work.

The first thing to understand is what is taking place inside the lung during an asthma attack. Once you know that, you can see how the different asthma medicines relieve the symptoms. Here is a schematic drawing of what a normal lung looks like: 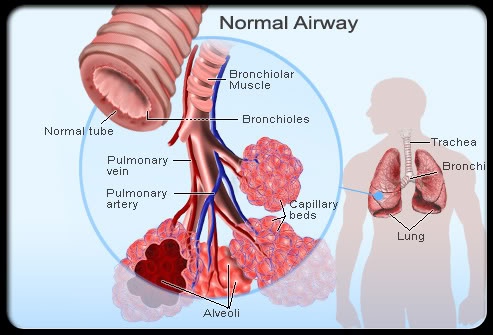 You can think of the lungs as being composed of two parts. The first is a system of conducting tubes that begin at the nose and mouth, move through the trachea (windpipe), split into ever smaller tubes, called bronchi, and end with tiny tubes called bronchioles. The job of this system is to get the air to the business portion of the lungs, which are the alveolar sacs. This second part of the lung brings the air right next to tiny blood vessels, or lung capillaries. Entering capillary blood is depleted in oxygen and loaded with carbon dioxide, one of the waste products of the body’s metabolism. What happens next is gas exchange: as the blood moves through the capillaries, oxygen from the air we breathe in goes into the blood, and carbon dioxide leaves the blood and goes into the air we breathe out. The newly recharged blood then leaves the lungs in an ever enlarging system of pulmonary veins and then goes out to the body.

The main problem in asthma is that the conducting airway system gets blocked in several ways, so the oxygen can’t get in and the carbon dioxide can’t leave. Although both are a problem in a severe asthma attack, getting the air out is usually a bigger issue than getting it in because it is easier for us to generate more force sucking in air than blowing it out. So the hallmark of asthma is not getting the air out — called air trapping. Why does this happen? There are two principal reasons: for one, the small airways, the bronchioles, constrict, get smaller; for another, the walls of the airways swell and the airways themselves fill with excess mucous, blocking air flow. Here’s another schematic drawing of what that looks like. 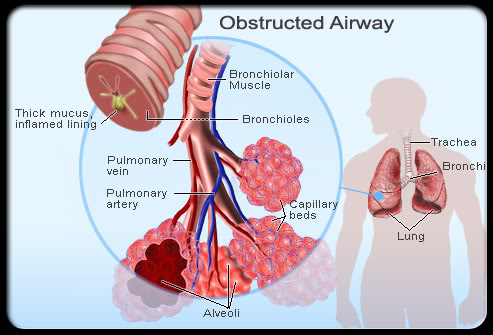 Thus during an asthma attack these things happen, all of which act together to narrow the airways and reduce air flow:

The medicines that we use to treat asthma work by reducing (or even preventing) one or more of these things. But before we get to them, an obvious question is why are our lungs are constructed in this way, especially if it can cause trouble? Why are those smooth muscle bands there? Why does there need to be mucous in our airways?

The smooth muscle bands are there for a good reason. The lungs need a way to direct the air we breathe in to the best spots, which are those regions of the lung with the best blood flow, and that changes from minute to minute from such things as changes in our position — lying down to standing up, for example. Those muscle bands function like the head gates of an irrigation system, opening and closing to direct air to the best places. The mucous is important because it is one of the chief defenses our lungs have against harmful or irritating things we breathe in. The mucous traps debris and steadily moves it up and out of our lungs. In asthma, both of these natural systems become deranged. The so-called triggers for this derangement vary from person to person, but the results are similar. The medicines we use are similar, too, no matter what started the asthma attack.

One of the mainstays of asthma treatment is a member of a class of medicines we call selective beta agonists. The generic name for the one we use most commonly is albuterol. Common brand names for albuterol are Ventolin and Proventil. Albuterol comes as a liquid, which we blow into a mist either with a device called a nebulizer or with what’s called a metered dose inhaler (“puffer”). The second of these is more convenient to carry around, but it can be more difficult to use with small children, although adding a special chamber to the device can help. The patient inhales the mist of albuterol. It works by soaking into the smooth muscle bands, making them relax, and in that way making the airway tubes bigger to allow more air flow. (There is also an oral form of albuterol, but for a variety of reasons it is not a good choice for children with asthma.) For many patients with asthma, inhaled albuterol alone is adequate treatment for their symptoms. A key thing to know about albuterol is that it goes to work right away, generally within minutes, so it is a good medicine for an acute asthma attack.

Another class of medicines long used in the treatment of asthma is corticosteroids, or steroids for short. These medicines work by being powerful blockers of inflammation. If you have ever had a poison ivy rash, for example, you are familiar with inflammation: redness, swelling, and seepage of fluid from the tissue (we can use steroids to treat poison ivy, too). A similar inflammation around the small airways is characteristic of asthma. It makes the linings of the airways swell, weep fluid, and increase mucous production. For a severe attack, we give steroids by mouth or intravenously (IV, directly into the bloodstream). They are very effective when given that way. But they do not go to work right away — several hours are needed at least. So although we may start them during an acute attack, we don’t expect them to help for a while.

Steroids are powerful drugs. When you take them by mouth they affect your entire body, not just your asthma, and that can cause problems. This is why we only use systemic steroids — those by vein or by mouth — for as short a time as possible, typically five days or so. We have other forms of steroids that are inhaled. This allows them to work directly on the airways without affecting the entire body. Common brand names of inhaled steroids are Pulmicort and Flovent. The inhaled steroids, like the systemic ones, don’t go to work right away. So they are intended primarily as a medicine to maintain control of the asthma. It is a common mistake for parents to give their child multiple doses of inhaled steroids when they have worsening breathing troubles — steroids are not intended to be used that way. The proper so-called “rescue medication” for worsening symptoms is albuterol or drugs like it.

These days we have hybrid medications that combine a long-acting albuterol type drug with an inhaled steroid. This combination is intended as something to be taken for chronic control of patients with moderate or worse asthma, and these agents are quite effective at doing that. Common brand names are Advair and Symbicort.

So albuterol (and beta-agonists like it) and steroids are mainstay medicines for treating asthma. In combination they make a good team because they attack the asthma via two different modes of action. We have some other medications that work by still other mechanisms. Montelukast (brand name Singulair) blocks airway inflammation by another mechanism than do steroids. Unlike systemic steroids, the action of montelukast is more selective and this medication is safe to take for prolonged periods. For some patients, montelukast and an occasional puff of albuterol is sufficient to keep them out of trouble. Finally, an inhaled drug called ipratropium (brand name Atrovent) blocks excessive mucous production by another method than blocking inflammation; it is often helpful as an adjunct to the other medicines. A couple of medications (brand names Combivent and DuoNeb) combine ipratropium and albuterol together so they can be inhaled at the same time.

So how do doctors decide what asthma medicines to use? One obvious principle is that it makes little sense to use more than one medication of the same category: combinations ought to work in different ways so they can work together. But beyond that obvious principle, how do we decide? The usual approach is to classify patients with asthma according to their severity and then add medicines in a logical, step-wise way until we get control of the symptoms. There are guidelines to help us do this. A good, recent summary is published by the National Institutes of Health. If you or your child has asthma it is a good place to find information. It is also useful to look at the actual decision tree doctors use to decide what medicines to use and in what order. One key principle is that we divide medicines into maintenance medications — those the child takes every day — and “rescue” medications, ones the child takes for worsening symptoms.

Asthma is common and is getting more common every year. Certainly speak with your child’s doctor about doing some good detective work to figure out what your child’s asthma triggers are. Then take steps to modify exposure to them or avoid them. Common sense tells us that if we can reduce symptoms by reducing exposure to common triggers, such as tobacco smoke, we should do everything we can to reduce the need for asthma medications. But for many children, this will not be enough; their parents should understand how these medicines work in order to make the best use of them.

How can we judge the ideal health system of the future?

Gun imagery in PG-13 movies is targeting our teens