I met Dr. Stulbarg when I was twenty-two, and had just moved in with my boyfriend Stephen. Stephen had cystic fibrosis, but he’d been unusually healthy until now, when his lung collapsed on the way to a party. Then, in the hospital, his lung collapsed a second time. We sat on his bed together, talking with Dr. Stulbarg about what would happen next.

Stephen had told me about Dr. Stulbarg already. Stephen loved that he was direct, crisply funny, and had been a philosophy major in college.  Dr. Stulbarg never pretended that medicine had all the answers, but he was deeply engaged in the mystery.  In this moment, I wished he would at least pretend to have all the answers. Instead, he explained that they’d put a second chest tube in but they couldn’t guarantee it would work. He described a procedure called pleurodesis. “Sounds painful,” I said.

This would be the first of many times that Dr. Stulbarg looked out for me.  I don’t think it was because he had a special fondness for me, or for Stephen.  I think he understood, as any thoughtful doctor would, that Stephen’s health was linked to mine, that since Stephen would rely on me heavily, he would be wise to pay attention to both of us.  Though this is important for any couple in which one person suffers a serious illness, we may have been especially in need.  We were young — twenty-two during that first visit, and twenty-five when we got married — and we had no idea how long Stephen would live.

This is where Dr. Stulbarg did his best work. During appointments, he and Stephen talked about how to make decisions given the absence of years ahead.  He was not only comfortable with mortality, but with the more stigmatized outgrowths of chronic illness – depression, and dependency.  He helped Stephen live longer, but maybe more importantly, he helped him live fully.

Looking back, I think a lot about how Dr. Stulbarg was able to provide the kind of care he offered.  Yes, he may have simply been an excellent doctor, but what kind of environment helps the best doctors thrive? The care he gave Stephen took place fifteen years ago.  I wonder if he could have found time for those conversations now, had he been required to do fifteen minutes of paperwork for every appointment, or squeeze four patients into an hour, or regularly check his computer screen.

The care he provided was also possible because of the way we conceived of doctors as a culture. Stephen was a patient at an interesting crossroads in doctor-patient relations.  We were making the transition away from the Marcus Welby-type role — the doctor as all-knowing, to the doctor as facilitator.  And while it’s important to empower  patients to take charge of our health, this shift has unfortunately coincided with a shift to managed care, to insurance-driven medicine, to the idea of patients as consumers.  I find this ominous.  The patient as consumer means that the doctor is simply a service provider, interchangeable with any other service provider.  Gone is the relationship.  And with that, gone is quality health care, for a number of reasons.  For one, the doctor doesn’t know his or her patients deeply, as Doctor Stulbarg knew Stephen (and even me).  For two, we need to think carefully about who is going to want to take this “service-provider” job.  Being a doctor is still well-respected, as being a teacher used to be.  Both professions are alchemies of knowledge, skill and art.  Look what we’ve done to the teaching profession by undervaluing it, and you’ll see where the medical profession may be headed.

The easiest way to ensure that there will be great teachers and doctors is to make those careers rewarding for the people who will do them best.  Unfortunately the people who’ve tried to create structures that will ensure teachers perform are not always those who understand why teachers go into teaching in the first place.  There is a key difference between the motivation to be a CEO and the motivation to be a doctor or a teacher — the deep desire to make a difference in individual lives.  Though this is still possible for teachers, we have made it harder, and it shows in the dwindling interest in the profession. Think about this, and then think not only about the working conditions of teachers in this country, but those of doctors.

We can blame the greedy top dogs in the insurance industry, and the senators who refuse to regulate that industry, and I do.  But I also think we patients have a part.  We are quick these days to check on Yelp before we do anything from rent a hotel room to get knee surgery.  I worry about our willingness to trust the star-rating system when it pertains to health care. I see ratings of hospitals and doctors, based on numbers of successful surgeries, for instance. I wonder, if Dr. Stulbarg’s success had been measured by outcomes, would he have been crazy enough to go into the specialty of cystic fibrosis in the first place, or would he have chosen something for which it would have been easier to earn five stars?

Doctors, like anyone else, should be held accountable for their work, but that doesn’t mean we can easily measure the way they can enrich patients’ lives. As with teaching, we can measure math skills, but if only we could quantify the lifelong engagement with learning a great teacher offers.

We all have stories of the teacher who changed our lives.  If you spend enough time in the landscape of serious illness, you also have that story about a doctor.  Here’s mine. When Stephen was thirty, almost two years after his double-lung transplant, he got a serious infection in his lungs. He went into the hospital, and the next morning, he was put on a ventilator. For two weeks, the doctors and nurses in the ICC worked around the clock.  One evening, Dr. Stulbarg came into Stephen’s room, and asked me if I had a minute. We sat in his office, in the dim light of dusk.

The odds that Stephen would live were very slim.  Dr. Stulbarg held my hand, and in spite of myself, the tears streamed down my face.  I was twenty-nine, and at that moment, if I could have traded ten years of my future for another month with Stephen, I probably would have done it.  Luckily for my future self, I couldn’t, I just sat in that chair, winding my feet around its legs.  I asked Dr. Stulbarg how long he thought Stephen had.  Days, he told me, probably a few days.

“You can think about how you want this to go,” he said.

And I thought. I tried to do what Dr. Stulbarg had encouraged us to do all along – to figure out what we could do with what we had.  I told him I wanted the chance to talk with Stephen one more time, and I wanted to sleep with him in his bed on his last night. He made sure those things happened.

How differently Stephen’s death would have gone without that conversation — if Dr. Stulbarg hadn’t known me well enough to know I’d want to know.  It sounds dramatic, but sometimes I think I might not be the same person, or at least I wouldn’t have the same relationship to death, and to Stephen’s passing.  I was able to be with my husband fully in his last days.  How can you measure that?  (If only you could.  My insurance company should calculate the many dollars it saved in future therapy, to start.)  It has made me a happier, healthier person.  It is a gift I can never repay.

Elizabeth Scarboro is the author of My Foreign Cities.

Let the health care battle be an all-star game 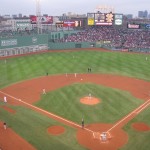 The anatomy of a good doctor
3 comments