After getting off a 15 hour call day, all I want to do is write.

These past 2 weeks death has been on my mind a lot, more than it ever has been. I have always known that physicians counsel patients and families on dying, but actually being the one to do it is entirely different.

How do you tell someone that their best medical option, the best thing you can offer them, is to die? As medical professionals, it is hard to say for a number of reasons.

One, our goal is to keep patients alive, and admitting defeat and giving up can be difficult. Two, on a humane level, how do you go about conveying that message to a living breathing human being? You feel like you are destroying their hope, taking away what little fight they have left in them. It’s a highly unnatural and difficult conversation to have and yet so important and necessary in end of life care. It is really a privilege for physicians to be able to partake in what is arguably one of the most important discussions in a patient’s life.

I have been thinking about my grandmother who passed away last June. She had been diagnosed with congestive heart failure back in 2011, and steadily declined throughout 2012. After multiple trips to the ER and spending weeks inpatient, she and my extended family decided that she did not want to live her last few months in a hospital, eating sodium restricted hospital food, never getting enough sleep, and constantly surrounded by strangers. She went home and lived the way she wanted to until she died in her own bed a few months later, surrounded by family. We had cut down on her medications substantially by then, and all she received at the end was morphine to help with the pain. My mom has expressed to me multiple times since then that she wants to be DNR/DNI (do not resuscitate, do not intubate), meaning that if she were to decline, she does not want a breathing tube or to be put on a ventilator, and she does not want CPR.

It’s hard for me personally because I am pro-medicine, pro-treatment. I want to try everything I possibly have in my arsenal for my patients because I want them to get better. Why stop an intervention if there’s a chance it can help? But what I’ve come to learn is that sometimes the price to pay to get a tiny bit of improvement far outweighs the benefits.

At the end of the day, patients may decide to choose quality of life for a shorter period of time over trying to improve their medical prognoses. And that is an equally respectable and admirable decision. I know that as a future physician, what I say during these goals of care discussions can really sway a patient’s decision about further interventions. I just hope that I can compassionately but also rationally help patients navigate through the options until they decide on one that’s the best path for them. Someone did it once for my grandmother, and I know that it changed her life for the better.

Joyce Ho is a medical student who blogs at Tea with MD.  She can be reached on Twitter @TeawithMD. 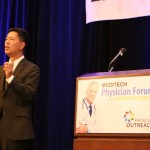 The price for improvement sometimes outweighs the benefits
4 comments