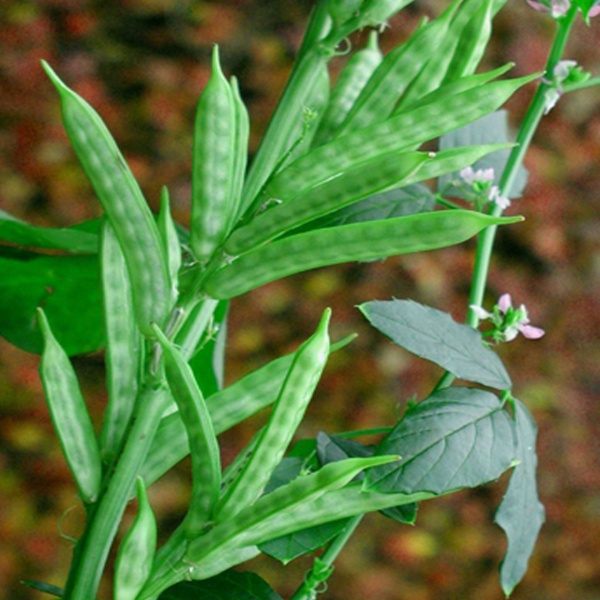 It is increasingly difficult to find real ice cream.  When reading the ingredient list it is discouraging how many cheap fillers, consistency modifiers, and shelf life extenders are included.  One ingredient, namely guar gum, seems fairly ubiquitous.  So what is guar gum, and why is it found in so many products including ice cream?  Is it “bad” to eat?

Guar gum is the ground endosperm of the guar bean, usually produced as a whitish powder similar to flour.  It functions to thicken fluids, increase viscosity, reduce ice crystal formation, and act as a stabilizer and emulsifier.  It thickens water 8 times as well as cornstarch.

Most guar beans are grown in the arid regions of India and Australia.  It finds applications in many industries, including the food, textile, printing, explosives, pharmaceutical, and even hydraulic fracturing fields. Due to the boom of hydraulic fracturing in the US drilling companies like Halliburton created a large demand for guar gum recently, even creating a spike and bubble in the price of the commodity as they hoarded it.  Now it seems they are utilizing more synthetic, polymer based slurries to please shareholders and further defecate in our future water supplies, but I digress…

As a food additive it seems that such strange bedfellow industries would intuitively make one want to avoid such a product.  The safety and caloric value of guar gum, however, does not seem that bad.  As a polysaccharide fiber it is mostly indigestible for humans and has been touted as a source of soluble fiber.  It may actually contribute to a sense of fullness, lower glycemic index, and when taken in medicinal doses have a mild lowering effect on cholesterol.  It has been studied in irritable bowel syndrome and constipation, and has been found to have some utility in decreasing symptoms.  The FDA has banned guar gum as a weight loss pill due to reports of the substance swelling and obstructing the intestines and esophagus.  It has also been found to be a positive influence on the biotic flora of the intestines, acting as a prebiotic for beneficial bacteria.

In terms of environmental impact, guar plants grow in near drought conditions, and like other legumes harbor nitrogen fixing bacteria in the roots, making them a good crop in a rotation to improve the yield of successive crops.  Guar plants are susceptible to weed problems, and I would assume herbicides are used by large producers to control competitors.

Guar gum gets a favorable 1/10 rating from Environmental Working Group, indicating that studies and existing knowledge of the substance show low risks of carcinogenesis and environmental impact of the end product, but there is a small risk of allergenic properties.

So overall it would seem that guar gum is not so bad as an additive to processed foods.  That being said I prefer unprocessed or minimally processed foods, and some ice crystals and inhomogeneity in my ice cream is preferred.  In a world of infinite time I would feed my cows grass, pay someone else to milk them, and then spin that fresh milk with the other requisite ingredients into a fine, fresh ice cream delicacy.  Short of this I look for ice cream with minimal signs of superfluous, gratuitous ingredients, and accept that I live in an over-processed world.  Ice cream will never be considered a healthy food, but life is short and full of pain, and the pleasure derived from eating good ice cream is hard to deny.

And so if I am forced to eat some guar gum in ice cream or the like, I won’t stress that much.

The tension between personal opinion and public harm