Congratulations on your admission to medical school! Your white coat ceremony is coming, and it’ll be grand. Your orientation leaders will suggest study skills, where to find scrubs and the best cheap supplements. Maybe more enlightened members of the faculty will remind you that medicine is really about the patients. If your parents are physicians, as so many medical students’ parents are—mine are not—they will reminisce about their own days before work hours restrictions and social mores constriction. Their manual, The House of God is a great book—and its medical training model no longer exists.

As the pediatrician Don Berwick, former director of the Center for Medicaid Services director and current candidate for governor of Massachusetts, said to the Harvard Medical School class of 2012, today’s medical training is so much like The House of God that it’s actually worse than that described in The House of God—and he went to medical school with the guy who wrote it! So don’t let advice-givers cute up medical school for you. Their proposed skill sets are useless to the 21st century doctor. They grew up in an era free of “skill sets.” Having made it to fourth year with a few skill sets intact, here are my tips for success in a frenetic twenty-first century medical school.

To thine own Internet personal brand be true.  That name spelled backwards on Facebook during residency application season? EsuoH YrogerG, Yerg HtidereM, and nairoD Nhoj? Somebody knows where you are. Own you. House of God guy says he’d have published it under his own name today. Maybe he wouldn’t have selfied the sex scenes or made animated “Oh, no you di’int!” .gif files of patients falling and projectile vomiting, but you get the idea. Personal brand is my favorite slur against millennials. Make it a compliment. It’s hard enough to learn medical professionalism and making yourself act like a parody of a medical student at the same time.

That said, HIPAA is no joke. You will have to complete HIPAA training about once a year. I had a friend who, well, HIPAA should bar me from saying more, but let’s just say more generally that it’s in your best interest not to Instagram yourself in four-point restraints.

While we’re at it, stop quoting doctor shows. You are the hottest doctor show in America right now. Medical school is neither exactly like that show, nor nothing like that show. For any postbaccalaureate premedical students who remember The Larry Sanders Show, medical school is closer to that than it is to any sitcom or hour-long drama. By that, I mean it’s by us and about us. Have you started to notice that the New York Times runs an article on medical education reform at least once a week? C’mon. This is the era of the livestream. You, friend, are the showrunner here. There are articles about you, photos and videos by you, articles and blogposts and tweets written by you, and people older than you will use these words to say you are a 21st century doctor. A classmate will get an article published/be interviewed by a large media outlet/save a life you didn’t/be in the right place at the right time/have a jam band. You aren’t Doc anymore. You’re a health care provider and/or allied professional.

Get used to terrible reviews. Don’t get over them. Do-over them. I wrote an eBook about 21st century medical education reform. It got terrible reviews. Some people said I had no idea what I was talking about. Some people thought I was trying to tell other people they had no idea what they were talking about. Mostly I was trying to write an eBook that I felt was true to myself and to my experience. It hurt, but I started taking some of their writing tips as a result. And people thought my writing got better! Take coaching. It feels awful until it feels like flying.

You’ll never forget your first patient—your classmate. During our first group bedside examination, my classmate fainted in front of a senior cardiologist. He saved her, and now she is an internist at his hospital. It was low blood pressure. She was under duress. To her, it felt like being onstage to her, and she froze. I would later come to know that duress well myself, and when I told my classmate about my emotional struggles throughout medical school, a few of them came up to me and said, “You know, I was too! I wish somebody had said something earlier!” Whether hurting or drinking or using, we treat ourselves worse than we treat our patients. We don’t have to cry in one another’s arms, but that not-me person who looks unflappable? Trust me, she’s flipped. Just say so sometimes.

Whenever in doubt, say “online module virtual simulation,” “flipped classroom,” “Google doc,” “back to the bedside,” and/or “big data.” You can also say bench-to-bedside, which encompasses all these ideas and is shorter.

No one knows when/where the test is. Thanks to ongoing medical center renovations and building renamings at my medical school, which is also being renovated, no one ever knew how to find the test. They knew where they were supposed to go during the test that counted (hospital flood). So don’t flip out about what you don’t know. If you have a friend already in medical school, ask if he or she has ever tallied how many times he/she says “sorry” or slumps over in ignorance in one day. My guess: A lot, a lot more than in premed. Someone will show you the way, and you will pass. And on the off-chance you don’t, it will pass.

You will get in trouble for not doing something no one told you to do. Medicine is the best laughter. Thanks to unsynchronized electronic medical records, most medical transfers and transactions occur via electronic platforms. Unfortunately, most hospitals have inconsistent wi-fi and limited computer access. And so you will not know something everyone else knows before they know it. Accept it as occupational hazard. It will be humiliating, but everyone has been humiliated by it at some time.

You will get in trouble for doing something someone told you to do. Your residents are getting in trouble for sleeping instead of working late at the hospital when they’re not allowed to by law. They are also getting in trouble for working and wanting to sleep. Your attending is getting in trouble for not knowing the fine details of an infinite patient census and for not doing enough teaching, or doing too much teaching. And you will get in trouble for not reading their minds, minds so busy they will forget about whatever they said that made you feel dumb or confused even if you don’t. Are you the last thing on their mind? No, not for most. But they’re busy. Keep in mind that the problem probably isn’t you. It’s systemic, and the system’s not doing so hot. In that vein, cool your heels over these last tips to learn why the system’s as it is and why you came to join it:

Ask where your hospital’s billing office is. Please do not self-inflict a wound in order to get into the ER to do so, but you’d be surprised what people tell you.

Attend a health care reform protest. Now, “health care reform protest” does not mean “Occupy and Tea Party people are crazy.” If you got into medicine to “help people,” then you believe in something, that something being helping people. Most protests are over pretty ordinary issues like nurses and cafeteria workers wanting more respect or stopping a local public hospital from closing. People have a ton to say about American health insurance. Just ask people. Think of it like people asking you for medical advice over Thanksgiving, in reverse.

Ask a family for permission to watch them discuss death. I refuse to say “end-of-life decision-making.” Chronic care management defines health care systems, and illness narratives define people. Other than a morbidity and mortality conference, this is where you see both best.

Spend as much time as you can in an underserved neighborhood. Use the word poor without shame. Watch how much time administrative work takes for residents of the community. Stand with them in line for services. Shop with them. Visit their homes. This is not tourism. It’s practicing medicine.

Play “public health bingo.” As I recently wrote in the Atlantic, medical schools have to give short shrift to topics in preventive medicine to fit in the other learning I wrote about above. Learn the essentials from news briefs or from a card I made for MPH school: 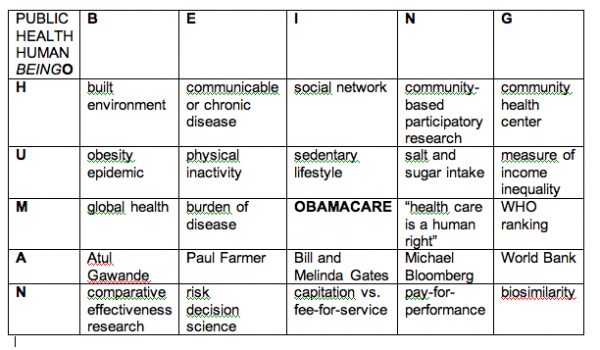 Everyone has read, or is going to read, the same three doctor memoirs. These books are, in order, Mountains Beyond Mountains: The Quest of Paul Farmer, a Man Who Would Cure the World by Tracy Kidder, Complications by Atul Gawande, and My Own Country by Abraham Verghese. I made a checklist of them, for Atul. Off the top of my head, I can name at least ten other physician writers who write with the same verve (Rivka Galchen, Chris Adrian, Austin Ratner, Josh Bazell, Richard Selzer, Arthur Kleinman, Nancy Krieger, Paul Farmer himself), who write more penetrating policy criticism (Arnold Relman, Marcia Angell, Steffie Woolhander and David Himmelstein), three others who write about my teaching hospital alone (Danielle Ofri, Perri Klass, Eric Manheimer).

And every doctor has a start-up project in the works. So you see doctors like to talk about medicine, a lot actually. You wouldn’t be a doctor, either, if you weren’t intoxicated by stories, even if that story is of how a mechanism or a machine works. Even the ones who say they hate reading and books have a screenplay in the drawer. Most of them have a Web start-up in mind, maybe not for now, but — don’t get jealous! Show your work. Share it. Workshop.

Marry that guy. Have that child. Schedule medical school around that, not the other way around. Those are the stories people forget to tell, and they’re usually the best ones. On that note:

It really is about the patients — they’re them, and us.

My best luck to you.

Maureen Miller is a medical student who blogs at doctor writer maureen miller.

Treating the psychiatric patient in the ED: 3 changes I'd like to see