I’ve written several times before about my love/hate status with my EMR. While I enjoy using mine, I long for it’s usefulness to get to the next level. While the EMR is useful at tracking data, it’s greatest handicap right now, is that it can’t talk to other systems. Data is still locked in individual systems and can’t be shared across platforms. This lack of interoperability has thus far been the EMR’s greatest handicap, and I have longed for the time when EMRs are able to share data.

But as I see more and more systems being employed in my area and talk with other physicians about their experiences, I am becoming increasingly concerned that  the inexorable march forward is going too quickly.

Shouldn’t we get these systems right before introducing interoperability into the equation?

The administration and the public are now clamoring that the information in these systems should be able to be shared among providers. In effect, that the information should not be “held hostage” by each providers respective system. These are fair and reasonable requests that should be expected in the long run. To that end, some EHR vendors have agreed in principle to begin writing standards that would allow interoperability between systems.

The unfortunate problem here, and one that the public does not understand, is that these systems are not like the  computer operating systems that they accustomed to using. It’s easy to forget that Microsoft, Word, Windows, PowerPoint, and Macs are more than 20 years old.  They’ve gone through several generations and hundreds of billions of dollars in development by the worlds most talented programmers. All to now finally be at a point where the program does not routinely stop working for some unknown reason.

In December 2012, Microsoft made $21 billion in revenue. In the same period, Cerner, one of the largest health IT outfits just made 3% of that. How could anyone reasonably expect that  Cerner could put out a system in it’s first generation that is anywhere near as well thought out and user friendly as a current Microsoft or Apple product?

The $27 billion that the administration put aside in the 2009 stimulus bill included certain stipulations in order for EHRs to qualify for government subsidies. These stipulations, also known as “meaningful use,” are being rolled out in several phases. They include several measures of functionality in order to document and track health care quality measures with the hope that they could be used to improve patient care. Among these measures were financial penalties for physicians who did not adopt the systems.

From the time the bill went into effect,  the race was on. Health IT companies have cobbled together a growing healthcare IT infrastructure which is being adopted by physicians on a massive scale. To the EHR vendors, it’s been a buffet. All they had to do was create systems that met those specific meaningful use targets that the government had created, and physicians would have no choice but to purchase them. Unfortunately several important parameters were not included among these targets.

For example there was no requirement that the systems be good.

Don’t get me wrong, I’m relatively happy with my system, I never want to go back to the days of dictating every patient encounter in the office. But my system was in place long before the government got involved, and we’ve had years to refine it to our specific needs. Most other physicians have not had that luxury. Furthermore we are a small office with only a few users, not a large hospital or hospital system which must apply the technology on a large scale to be used by thousands of people.

In places like those, and in small physicians offices where physicians are new to the technology, things are getting pretty ugly.

Most physicians are not happy with the systems currently in place. They knew that these would be first generation systems which would need to be refined. But they expected that at least the systems would be designed around physicians, and be intuitive.

Instead many physicians now  feel that they’re being forced to buy overpriced, sub-standard, half-baked systems designed by polytech school dropouts.

What is it like to use these systems? Put yourself back in 1990 in front of a  Windows 3 machine, to give yourself a good picture of the “modern” EHR experience.

Should EHRs talk to each other? Yes, absolutely. But they have to work first.

Thanks for the compliment, but I'm not a nurse 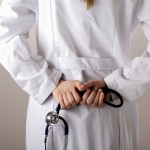 EHRs need to talk to each other, but make sure they work first
8 comments