I have been struggling with a certain degree of cognitive dissonance following the announcement this winter of a study in the New England Journal of Medicine on the efficacy of fecal transplants as a therapy for clostridium difficile (C. diff) infections. While the study is the first to demonstrate the effectiveness of fecal transplants in treating recurrent C. diff infections (15 of the 16 patients in the group were cured versus 4 of 13 in a comparison group), much of the press attention to the report reinforces the taboo of discussing our bowel movements.

The highly regarded New York Times’ cover story was titled “When Pills Fail, This, er, Option Provides a Cure“. Other articles about the study referred to the procedure as “icky”, “poop” and “as effective as they are disgusting”.

“Eat Shit or DIE” said The L Magazine. “The Enema of Your Enemy is Your Friend” said Slate.

These headlines, while largely tongue-in-cheek, and purposefully provocative to generate sales and clicks, reveal the revulsion most people feel about feces. It seems to me that our utter inability to discuss this very basic byproduct our human experience is not only somewhat childish, but also potentially dangerous with regard to C. diff and other gastrointestinal diseases.

In the three years since my mother died from a C. diff infection, I have spent a great deal of time talking about shit. I’ve also spent a lot of time reading and learning about it. From exploring the various forms that feces take and what they indicate about our health and wellbeing to learning how labs process stool cultures to transcribing stories of C. diff sufferers and survivors, I’ve often felt like I’m knee-deep in the stuff.

In working to raise awareness of a bacterial infection where the primary symptom is diarrhea, I’ve learned there’s really no way to do that without “talking shit.” This often puts me in the position of spoiling appetites at dinner or asking what are considered very personal questions. But more than anything, working to combat C. diff has shown me how prudish most of us are, to a fault.

There are many reasons we feel as we do. Feces are a waste product. They smell terrible. Stool often looks strange to us. But the primary reason for our reservedness and contempt around shit emanates from the same place as our prudishness about sex: cultural shame.

From an early age, we are taught to be ashamed of our bowel movements. The extent to which most adults are ashamed is exemplified by the fact that an otherwise very helpful message board for C. diff sufferers and survivors, has a section called “Too Much Information” at the very bottom of the Web site where all posts that describe bowel movements are relegated. Think about that: A message board for a disease where the primary symptom is diarrhea insists that any commentator who actually wants to “talk shit” needs to do so in the basement of the message board.

My mother was a kindergarten teacher, and one of the books that she kept in her classroom was “Everyone Poops” by Tarō Gomi. If you’re not familiar, the book is geared toward young children and illustrates how every animal that eats also has to defecate, including humans. In a very sweet, clever way, the author explains that poop comes in various shapes and sizes depending on where it originates. For example, it shows that an elephant makes “a big poop” and a mouse makes “a little poop.” It also shows through a little boy character that all humans poop and how.

Perhaps because my mother was a kindergarten teacher, or that I suffered from irritable bowel syndrome in my twenties, “talking shit” has never bothered me.

The symptoms of C. diff are perniciously simple: watery diarrhea and abdominal cramping. For people with more aggressive strains of C. diff, additional symptoms can include fever, nausea, loss of appetite, dehydration, and weight loss. Still, particularly during the first few days of onset these symptoms can easily be mistaken for norovirus (stomach flu) or mild food poisoning. Sadly, the potential mistaken identity issues around C. diff and other illnesses for which diarrhea is the predominant symptom can lead to delays in treatment leading to poor outcomes including colectomy and death.

Before I got into patient-safety issues related to C. diff, I worked closely on HIV/AIDS. As a gay man who came of age in the 1990s, I missed the height of the epidemic. Still, in the years before protease inhibitors, HIV was a death sentence, often with a lot of messy going before the gone. So my early activism was born in a world where refusal to discuss the nitty-gritty of sex was dangerous to ourselves and our community. By engaging in uncomfortable conversations about sex; by tending to and cleaning up after friends and lovers; by developing, promoting and adhering to new sexual practices; and by pushing for new treatments, gay men and our allies turned the tide of the HIV epidemic.

To really combat C. diff, we need to get past the ick factor.

Christian John Lillis is co-founder and director, The Peggy Lillis Memorial Foundation, the first national organization dedicated to reducing and eradicating Clostridium difficile infections, or CDIs, through education and advocacy. 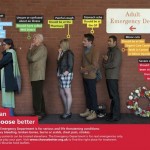 My first day at the pediatric oncology clinic

The revulsion about feces: Get over it
19 comments