Now that states have decided what they are going to do about health insurance exchanges—those new shopping carts created by Obamacare to help consumers find health insurance who do not get it through their employers—the really tough part begins.  State and federal governments need to make sure that consumers understand their health insurance choices.

This was a tough decision for states, because it pitted ideology against, of all things, ideology!  Imagine, for example, that you are the Republican governor of a state that voted for Romney in the recent presidential election.  You and most of your constituents are not fans of either Obama or Obamacare.  Since Obamacare asks states to create their own health insurance exchanges, you would like to avoid that option.  You would have loved it, in fact, if the Supreme Court had struck down the entire law.  But since Obamacare remains the law of the land, you would like to do anything else you can to thwart it.  However, in the case of federal exchanges, if you decide to say no to creating a state exchange, you will be compelled by law to cede control of the exchange over to the federal government.  The clever crafters of the Obamacare law recognized that they needed a fallback position—that if states weren’t going to come through with exchanges of their own, the federal government would need to take over.  That means if Republican governors like you stand tough against Obamacare, and refuse to create your own state exchange, you are handing control over to the federal government.  That is something that does not fit well with your ideological desire to shift power from the federal government to the states.

So governors faced a tough set of decisions.  But the decisions have been made, and now states and the federal government will be scrambling to get their exchanges up and running.  That is going to be a tremendous amount of work.  As explained in recent Senate testimony, operating exchanges is going to require incredibly complex coordination of a wide range of government agencies.  The IRS needs to verify consumer income information to see who qualifies for insurance subsidies.  The Department of Homeland Security needs to verify that people coming into the exchanges are legal citizens, since Obamacare does not offer health insurance subsidies to undocumented residents.

In other words, it is going to take a Herculean effort just to get the exchanges ready to sort out which insurance plans at what cost are available to whom.

Potentially lost in this pile of work will be the important task of making sure the exchanges present insurance choices to consumers in a manner that helps them understand and sort through their options.  A recent study in Health Affairs reveals how difficult this will be.  The researchers, led by Anna Sinaiko (a post-doctoral fellow at the Harvard School of Public Health) surveyed people who purchased healthcare through the Massachusetts health insurance exchange, also known as the Massachusetts Connector.  The Massachusetts Connector is, in many ways, a model for Obamacare.  The Connector has been running for a while now, and it has been part of a broader health reform effort that has enabled almost everyone in Massachusetts to obtain health insurance.

But how easily do people in Massachusetts make their health insurance choices?  Sinaiko’s survey showed that almost half of people using the Connector found it “hard to understand.”  About a third said that their choice would have been “easier with fewer plans.”  And about a fourth indicated that they wished they had had more help when making their choices.

To those of us who work in behavioral economics and decision psychology, Sinaiko’s results are not surprising.  People are not used to choosing among a slew of health insurance plans.  Those of us who have been lucky enough to receive health insurance through our employers in recent years have typically received three, maybe four, choices.  But consider this screenshot from the Connector: 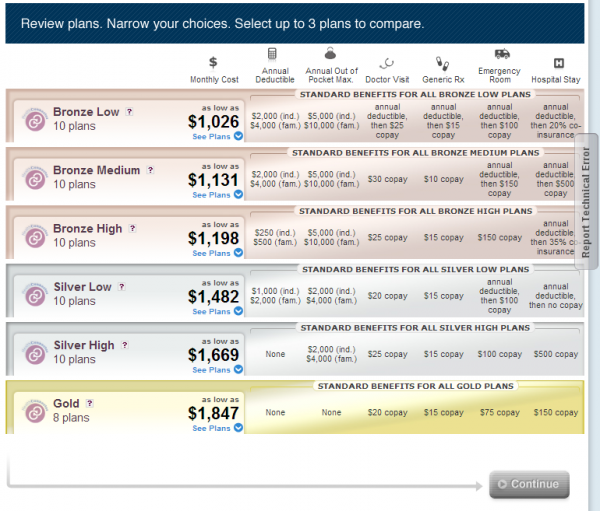 Six benefits packages to choose from, each with seven columns of mathematically complicated information.  And this is just a subset of the plans a person is asked to consider, when they come to the Connector.  Who wouldn’t be overwhelmed by this choice?

Research in behavioral economics and decision psychology has revealed the profound impact that choice overload can play in people’s decisions.  My friend Barry Schwartz, a professor at Swarthmore, calls this the “paradox of choice ”—situations in which expanding the number of choices people have (a situation that, on the surface, would seem to only offer people benefits) actually harms people, by causing them to make worse choices.  His collaborator Sheena Iyengar, a professor at Columbia Business School, has shown that when employers expand the list of retirement funds that people can invest in, many employees become paradoxically less likely to put any money into retirement.

In the case of retirement funds (or jams, another choice set Iyengar has famously studied), choice overload often leads people to opt out of choices.  In the case of health insurance in Massachusetts, most people have not opted out of this choice, in part because that state has an individual health insurance mandate.  Nevertheless, people behave as if they opted out of the choice, by choosing plans that—given their expected medical expenses—are not always the wisest choices.  They basically get so overwhelmed by the difficulty of the choice, they just pick a plan and hope it is the right one.

Expect a bumpy road over the next year or two, as the health insurance exchanges come online across the country.  Some snafus will no doubt result from the administrative and bureaucratic complexity of these new marketplaces.  But even without technical and administrative problems, you should also expect many people to struggle when faced with this bewildering array of new choices.

To succeed, I expect the exchanges will need to go through a series of modifications, so that the user experience becomes less overwhelming.  And with the help of behavioral science (plus the mere accumulation of experience that people gain using the exchanges), I expect the second or third generation of exchanges will be less likely to create choice overload for potential customers.

Independent nurse practitioners are not the primary care solution

Health insurance exchanges will be hampered by choice overload
8 comments