A city is free. A town is celebrating.

I sat and watched the local news station announce that the second suspect in the 2013 Boston Marathon bombings had been taken into custody and was being transported to a nearby hospital.

I am relieved. And thankful.

Then I wonder. I wonder about the hospital that this suspect is being transferred to, and I wonder about my colleagues. What are the nurses, the doctors, and all of the other ancillary staff thinking about when the terrorist, the man that has been attacking their city, rolls through the trauma bay doors, into their emergency room and is now their patient.

Your job, your calling, is to help all human beings, in their time of need. No matter what.

As an active duty military physician, I understand that when deployed, I may be treating enemies. The same enemies that just inflicted harm on my other patients. I don’t have a choice. It was an oath I took as a physician. I understand it, and I accept it.

As an intern, I worked at a hospital that had a prison floor. It was an actual prison, inside the hospital. Double gated and all. It was the main Department of Corrections hospital for the state.

I remember running the list in the morning with one specific intern on several different occasions.

As a health care provider, I do not care where you are from, who you are, what you have done or who you have hurt if it is not pertinent to your care or treatment.

Beyond that, I do not want to know where you are from, who you are, what you have done or who you have hurt if it will potentially compromise my care of you. I am human. I make judgments I have opinions. But they do not matter while I am treating you, so I avoid, the best way I can to knowing any of that information.

I recently had to treat an inmate for a couple of conditions that came about while he was being held. I happened to find out that he was being held for assaulting a minor of the opposite sex.

As a human being, I was disgusted.

As a physician, as his physician, I was caring, thoughtful and attentive. I treated him with the same respect and professionalism as I would have treated any other patient. I would expect the same of any of my colleagues.

While I am able to sleep well tonight, after being locked inside all day long after the massive manhunt just ended a few miles away from me, I hope that the physicians, the nurses, and the rest of the staff at one of the best hospitals in the world is treating Suspect #2 with the same respect, the same dignity and same professionalism as anybody else that would have rolled through their trauma bay doors on a Friday night. 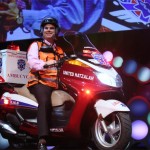 How would you react to a cancer diagnosis?