The second day of TEDMED 2013 began with the curator, Jay Walker, providing a recap of the first day, which set the stage for the first session of the day: “How Can Big Data Become Real Wisdom?” This session was the most technologically focused of the day. 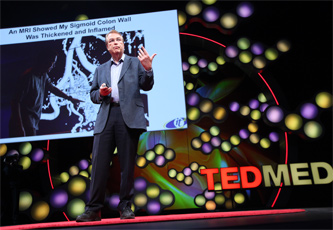 This session started with computer scientist Larry Smarr, an advocate of personalized medicine, who noted that applying changes to the data we already collect can give us a new vision. For example, by applying data visualization techniques we can make the data “organ centric” in ways that clinicians traditionally do not expect.

As he pointed out, “stool is information rich media” that the typical clinician will usually not think of using to help diagnose or treat a condition. Smarr had amazing computer resources at his disposal, and when he combined this information with a detailed description of data and symptoms, he obtained very specific answers. As he worked on his own medical condition, an inflammatory bowel disease, it occurred to him that medicine can and should be this individualized for all. 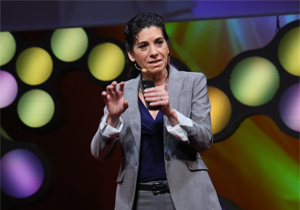 Deborah Estrin discussed the use of the large amounts of data we generate to create a “Digital Social Pulse” that can be used by individuals to get feedback about their health, as well as by health care providers to assist in the care of patients. This realization came to her painfully, realizing after her father’s death that his patterns of phone calling and emailing changed drastically before anyone knew there was a deep fundamental problem.

She noted that we analyze data but do not bring it back to the person who generated that data and there is a lot that we can learn from our digital data, just like bread crumbs that lead to their source. She sees real potential for enhancing healthcare with personalized data insights so that “we don’t have to just rely on our subjective memory.”

Elizabeth Marincola, publisher of Science News, discussed the concept that public dissemination of knowledge can be profitable even in an open access environment, which is essential because in her view open access publishing goes to the heart of science. Then, Max Little, applied mathematician, spoke on the “The Unreasonable Effectiveness of Math” and how we can build this into our approaches to data. 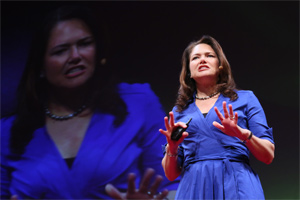 The final speaker for the session was Amy Abernathy, oncologist and palliative medicine physician. She shared the story of a patient, who had a “special treasure” to share … her data. Abernathy noted that our ability to personalize medicine is within our grasp, but the irony is that at the bedside we have trouble applying all this information to an individual, we need big data, but we also need the ability to use it. From her patient, she learned some key “pearls” about data: First, the patient needs to own their data, then patients should be able to control how their data is shared and used (to include the ability to rescind access if needed). Finally the data needs to be portable, and to be able to be used across a variety of settings and uses. She closed with the observation that “data is a non-depletable resource” and we need to find ways to use it in many different ways.

The second session of the day was focused on “Translating the Untranslatable” and featured speakers like the mayor of Oklahoma City, KC Mick Cornett, about transforming his community from one of the “fattest cities” in the country to one that’s relatively healthy. David Agus, author of “The End of Illness,” who spoke about his vision of cancer as a disease. Sue Austin shared an amazing video of her scuba diving in her wheelchair that was turned into a miniature submarine. For many, a highlight of the session was a talk by Sally Okun, the first nurse to speak at TEDMED. She promoted the power of patient stories and how we need to capture them from the patient’s point of view, as well as the physician’s. Finally, the session closed with Richard Simmons who got the entire TEDMED audience moving with song, dance, and his message of “counting your blessings every day.”

The next session focused on “Shifting the Patterns of Power” and featured speakers like entrepreneur Jonathan Bush, urban farming advocate Ashley Atkinson, medical researcher H. Shaw Warren, mathematician Max Little, and closed with an amazing talk by Peter Attia, a physician who shared an amazing story of his growth as a person and as a physician. 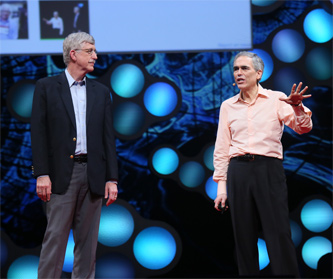 The final session of the day addressed “What Happens When You Mix Up The Models” and began with the announcement of a new TEDMED initiative, Lab TV, by Jay Walker and Francis Collins, Director of the National Institutes of Health. This project will enable researchers to share in real time their work, and perhaps even assist in the research.

Lab TV will try to get curious and scientifically minded people to interview researchers, go into labs, and provide a first person point of view of the latest scientific advancements, with the final goal of getting the public educated about what’s under development and to give a chance to researchers to profile their work to a wider audience.

Next in the session, Mike Pazin of the National Human Genome Research Institute spoke about his project to take the raw human genome data and build a disease encyclopedia to make the data useful. He made the observation that this type of research is possible only because new devices have allowed individual genomes to be analyzed cheaper than ever before. Then Gary Slutkin, epidemiologist, discussed his work in using epidemiology to look at violence as a public health problem. 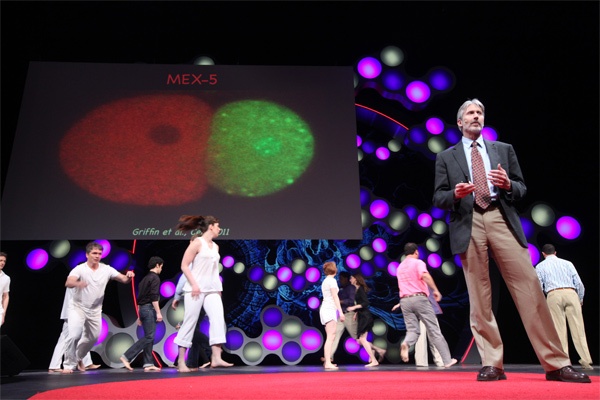 David Odde of the University of Minnesota in particular had a very interesting approach to the use of art, and dance in particular, to study how cells move and interact. As he was studying cellular activity, he talked to a dancer and demonstrated how the activity or body storming of the dancers can be used as a method of rapid prototyping of various types of cellular activity, including the migration of tumor cells, microtubule activity, and other cellular behaviors.

After this initial effort, the concept of “body storming” became more developed, with the addition of boundaries, groups, and permitted moves by dancers to more closely model actual cellular activity under various conditions. This effort directly led to better computer models and observations of cellular activity.

After performances by the The Manzari Brothers and David Odde & Black Label Movement, Zubin Damania, of ZDoggMD fame, addressed his plans to create new models of primary health care.