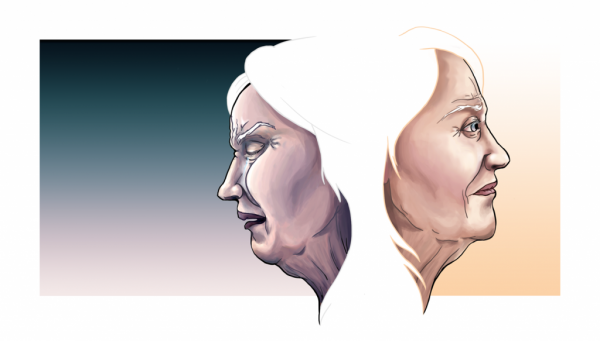 When we told the patient and his family that the mass in his lung was highly concerning for cancer, he didn’t say anything.  His daughter asked about his symptoms.  His son-in-law asked when and how he could get a definitive diagnosis.  His wife asked when he could go home.  Finally, he spoke.

“I’m sorry for being so much trouble.”  The tone was casually apologetic, the way I’d address someone after bumping into him on the T.  That was the first and last thing he said during the meeting.

In the days after, he stayed cheerily aloof.  When we read him the consent form before we stuck a needle in his chest to drain over a liter of fluid compressing his lung, he interrupted with a flick of the wrist.  ”Do what you need to do, Doctor.”  The fluid came out, slightly bloody.  ”It looks precious,” he said as he gazed at the jar.  ”I can use it in my garden and plant orange trees on top.”

On the final day of his hospital stay, he invited the entire rounding team over to his house for dinner.  A few minutes after we left the room, he took a walk wheeling his new oxygen tank next to him and waved goodbye to us.

He was a good patient.

There’s a lot of pressure to be the stereotypical “good patient”.  It doesn’t necessarily mean inviting the medical team to your house on Cape Cod for a traditional Russian dinner.  But there are certain characteristics I’ve noticed that my medical teams like: a “good attitude”, politeness, agreeability, compliance with treatment, and the ability to understand without asking too many questions.  Fall down on one or more of these and during a busy morning we may round on you last, or we won’t round on you as a team at all.  (Instead, you will have one-on-one conversations with your physicians throughout the day, so as to spare the members of the team not directly involved in your care the inconvenience of meeting you.)

The media encourages patients to be proactive about their care–to “advocate” for themselves, to be a “partner” in the therapeutic alliance, to ask the “tough questions”.  Nebulous as this advice is, I ultimately agree with it.  I hope I would follow it myself.

The common denominator of  these suggestions is that they take time.  Often, the team is happy and willing to provide that time.  Add a few extra patients to the list, or add a few extra comorbidities to current patients, and that time–along with that willingness–vanishes.

My father sees a famous cardiologist, and he rarely asks the doctor questions.  For the past three years I have criticized him for this.  ”What’s the point of having a good doctor if you’re afraid to ask about how he’s treating you?” I would chide him after every appointment.  He didn’t want to frustrate the doctor and compromise his care.

In response, I uttered every cliche in the book.  First, I denied that this would happen.  (“I’m sure he’s seen much worse.”)  Then I conceded that if it did, he could just find a new doctor.  (“Forget how famous he is.”)  I ended with my usual tough love: “It’s your life.  You’re the one who’s living with this, not him.”  A half dozen of these conversations later, my dad is thankfully healthy but neither I nor he can explain exactly how his care is being managed.

After spending less than a year on the wards, I am grudgingly beginning to wonder if my father’s instincts are that off-base.

One morning our team rounded on a woman with a past history of colon cancer (cured).  She had been admitted for bleeding from her rectum, and she had had exploratory surgery the previous day.  We stood around her bed and she admitted that she was “a little emotional”.  How was she doing?  I braced myself for the emotion she claimed to have.

“Well, they didn’t find cancer, so that’s a plus.”  I was floored by her understatement, afraid my surprise would show on my face.  I glanced at my colleagues.  If they felt the same way, they hid it well.

Instead, we nodded knowingly.  Indeed, remaining cancer-free was “a plus”.

The interaction was all very gracious and unemotional.  We told her our plan for the day, she asked a few quick questions for clarification, and she nodded and thanked us.

She was a good patient.

One of the most insidious things I’ve noticed in the hospital–moreso than a culture of deference and feigned understanding, even–is physician discomfort with emotional “cracks”.  There seems to be a dichotomy: patients who are unable to control their emotions and who thus belong on the psychiatry floor, and every other patient.

Leeway is given when we drop a serious diagnosis on someone.  We spend as much time as possible with a patient and his family–giving information, answering questions, and offering support.  Then the patient lives with his illness while we move on to treat other ones.  If we couldn’t move on, we would drown in the physical and emotional distress of our patients, becoming useless.

But it’s easy to get desensitized to the tearful patient next door with irritable bowel syndrome when I just got back from a family meeting for a patient with pancreatic cancer.  There seems to be a quota to the compassion I dole out daily, and the 53-year-old with a prognosis of 12 months just won the majority of today’s dose.

Maybe I could have allotted more conversation to Irritable Bowel if she had timed her irritable bowel not to coincide with Lethal Diagnosis’s lethal diagnosis.  I could have asked about how her disease impacts her life and what she likes to do in her free time.  I could have checked on her more often, bringing tissues and sympathy.  But I find myself spending more of my free time in her neighbor’s room.  I’m sorry–I truly am–that I succumb to this emotional triage system.

We are kidding ourselves if we think that patients don’t sense this timing crapshoot: when it’s okay to show emotional cracks and when it is deemed a nuisance.  So they decide not to show them at all.  My dad unknowingly taught me this firsthand.  Who knows if his cardiologist just came from a heart transplant surgery and considers my father’s concern about his LDL misplaced?

The veneer of emotional control extends beyond patients.  One night at 9 pm, I called my classmate on my team for a mundane scheduling question.

“Sorry I missed your call,” she told me 20 minutes later.  ”I was with my patient.”  He had been diagnosed with lymphoma a few days ago, and she had gotten close to him and his wife.

The next morning, my classmate spent more time with him and with another cancer patient.

I met her by the elevator at 8 am, ready to go to Grand Rounds.  I made a stupid joke.  Then I asked how she was doing.  She started to cry.

Shoot, I thought.  Too much cancer.

But if that was the underlying context, it wasn’t the trigger for her tears.  In a rush after spending time with her patients, she had made a minor mistake with paperwork.  Her resident was irate.  She stayed calm and apologized before heading to the elevator, where I had patients without cancer, had gotten my paperwork done, and even had time to make a stupid joke.

We were fifteen minutes late to Grand Rounds.  She sat in the back and had to leave in the middle.  No one except me had seen her cry.  An hour later, her veneer was back, she fixed her paperwork, and she did a great job presenting on rounds.

She was a good medical student.  But not for what she was evaluated on.

Perhaps it was with my classmate in mind that I read Pauline Chen’s recent article in the New York Times, “Why Failing Med Students Don’t Get Failing Grades.” Of course, the medical student in the article was much further along the spectrum: she let whatever frustrations she was experiencing get to the point where she was acting unprofessional and disrespectful.  My classmate had done the complete opposite, giving phenomenal patient care and staying professional when rebuked.

Students, like patients, are acutely aware of their place within the power structure.  They know the risks of being perceived as anything less than “good”, and once they are labeled as “non-compliant”, or having a “bad attitude”, or “asking too many questions”, the diagnosis sticks and colors future interactions.

I am aware of the irony–or even the hypocrisy–of writing this after I wrote about a terminally ill patient who threw all of his emotion at me in a heap of profane language and my visceral reaction to shut down and flee.  I got what I wanted, didn’t I?  A patient with lung cancer who apologized to me for it.

But I realized I lost something as well.

I was working on the pancreatic surgery service when I saw a patient in clinic for a follow-up after a complicated procedure.  I watched as the surgeon gave him the good news: his entire pancreatic mass had been resected.

He and his wife both smiled and profusely thanked the surgeon.  Then they thanked me, even though I had done little other than be present in the operating room and occasionally retract some fat.

The surgeon left the room first, and I followed.  Out of the corner of my eye, I saw the patient and his wife embrace in a way that I’ve never seen two people embrace.  But that emotion wasn’t meant for our eyes–even though it was the best possible one.

The system has trained us well.  In the battle to paint over negative emotional cracks, the positive ones have been collateral damage.

It’s efficient.  It’s controlled.  It’s polite.  But we are all a little less honest for it.

Special thanks to Mary Seerveld for her illustration.

Shara Yurkiewicz is a medical student who blogs at This May Hurt a Bit.

Our medical education system does not tolerate emotional cracks
2 comments