The following is an exclusive excerpt adapted from #1 New York Times best selling authors Chip and Dan Heath’s new book Decisive: How to Make Better Choices in Life and Work

One of the most fundamental problems of decision-making, according to psychologists, is that people get stuck in a “narrow frame”—they view their decision in an unduly limited way, often missing options that are available to them. To break out of a narrow frame, people need new options, and one of the most basic ways to generate those options is to find someone else who’s solved your problem.

For many health care leaders, this search for new options has become second nature. They’ve long since learned to “benchmark” competitors and absorb industry “best practices.” Sometimes, though, the practices that work for one organization may be incompatible with another, like an organ transplant that is rejected. (Imagine if McDonald’s, inspired by movie theaters, started trying to hawk $12 Cokes.)

That’s why we shouldn’t forget, when hunting for new options, to look inside our own organizations. Sometimes the people who have solved our problems are our own colleagues. That’s what was discovered by the leaders of Kaiser Permanente, one of the largest HMOs in the country with almost 9 million members.

In early 2008, Alan Whippy (her first name is pronounced uh-LANN), the medical director of quality and safety at The Permanente Medical Group in  Northern California, was staring at a set of data that astonished her. To continue pushing their hospitals to get better, Whippy and her team had asked the leaders of the 21 Kaiser Permanente Hospitals in Northern California to do detailed case studies of the last 50 patients who had died at each of their hospitals. One problem their hospitals had addressed aggressively—heart attacks—accounted for 3.5% of the deaths. But almost ten times as many deaths came from another cause that was barely on the radar screen at Kaiser Permanente or most of the other hospitals they knew: sepsis.

Dr. Whippy explained sepsis with an analogy: “If you have an infection on your skin, it gets inflamed–red and hot and swollen. The infection itself doesn’t turn the skin red, that’s the body reacting to the infection.” Sepsis is a similar reaction to an infection in the blood stream. The body’s inflammatory reaction spreads to the whole body, even to parts far away from the infection—a case of pneumonia, for instance, can trigger kidney failure or even brain damage.

What Dr. Whippy and her team realized was that physicians were paying careful attention to the infections, like pneumonia, but they weren’t aggressively treating the associated sepsis, which was often the true cause of a patient’s death.

Freeze there. Whippy had a problem on her hands: She needed options for improving Kaiser Permanente’s treatment of sepsis. Where could she find those options?

She located one critical connection within Kaiser: Dr. Diane Craig, a physician at Kaiser Permanente Santa Clara. Craig and her colleagues had spent several years working on sepsis and had already shown some reduction in their sepsis death rate. They were frustrated that progress was not quicker, though—especially since the “recipe” for managing sepsis was known. In 2002, a provocative article had appeared in the New England Journal of Medicine, showing that patients were substantially less likely to die from sepsis if they received quick and intensive treatment shortly after they were diagnosed.

It was easier said than done, though. As Craig knew from personal experience, the quick and intensive treatment was difficult to implement for two reasons. First, sepsis is hard to detect. A patient might look fine in the morning but plunge into crisis by lunchtime, and by then it was often more difficult to correct the cascade of internal damage.  Second, the protocol recommended by the article for treating sepsis—which involves administering large quantities of antibiotics and fluids to the patient—carries its own risks.

As Craig said, “It takes a while for people to get comfortable saying, ‘This patient looks good but I’m going to put a large central IV catheter in their neck and put them in the ICU and pump them full of liters and liters of fluids. And we’ll do all this even though they look perfectly fine at the moment.’” The research supports this early intervention. The risks are worth it. But it was difficult for doctors, with their “Do No Harm” ethos, to move as quickly and forcefully as the research said they should.

Craig and Whippy realized that, to fight sepsis, they had to overcome these two problems by making sepsis easier to detect and by demonstrating to staff the risk of inaction.

With Whippy’s support, Craig and her team began to incubate new approaches to the problem at Santa Clara. One idea was simple but powerful: Whenever physicians ordered a blood culture—a sign they were worried about a blood-borne infection—a test for lactic acid was automatically added to their orders. (Lactic acid is a critical indicator of sepsis.) This allowed them to detect sepsis well before it began to influence the patient’s vital signs.

Other changes were intended to make the Santa Clara staff more aware of sepsis. Posters and pocket cards were printed up that highlighted the symptoms of sepsis. A grid on the printed materials showed the mortality risk for different patient circumstances. “People could see that this patient, right in front of me, even though they look good—they have a 20% chance of mortality. It was very powerful,” said Craig.

If the doctors and nurses spotted the symptoms of sepsis, they were asked to call a “sepsis alert,” the equivalent in urgency of the “code blue” called when someone is experiencing a cardiac arrest. The sepsis alert summoned a team that could assess the patient and, if appropriate, begin the intensive sepsis protocol.

These innovative solutions began to work. Sepsis deaths began to decline. Whippy, who’d been following the work, knew that the Santa Clara team was assembling a package of cultural interventions that she could spread to other hospitals.  Meanwhile, other hospitals, who’d been pursuing their own solutions, added other critical pieces of the puzzle, like a “pressure bag” that fit around an IV like a balloon, ensuring that sepsis patients would receive fluids quickly enough.

Within a matter of months, under Whippy’s direction, the sepsis protocol was being actively implemented in other hospitals. By summer 2012, Kaiser Permanente Northern California, composed of 21 hospitals serving 3.3 million people, had driven down risk-adjusted mortality from sepsis to 28 percent below the national average.

The leaders of Kaiser make it a priority to study their own internal “bright spots”—the most positive points in a distribution of data. For the treatment of sepsis, for instance, Dr. Craig’s team represented a bright spot, because of its lower death rate.

Bright spots can be much more mundane, though. If you’re trying to stick to a new exercise regimen, then your bright spots might be the four times last month that you made it to the gym. If you take the time to study and understand your bright spots—how exactly did you manage to get yourself to the gym on those four days?—then you can often discover unexpected solutions. Maybe you’d notice that three of the four occasions were during lunch, which tends to be the least complicated time for you. So you might make a point to avoid scheduling things at lunch time, keeping that time free for future workouts.

The wonderful thing about bright spots is that they can’t suffer from the rejected-transplant problem, because they’re native to your situation. It’s your own success you’re seeking to reproduce.

Both bright spots and best practices, then, act as sources of inspiration. If you’ve got a dilemma, and you need new options, you can look for new ideas externally, as with benchmarking and best practices, or internally, like Kaiser’s leaders. What’s critical is that we refuse to get caught in a narrow frame, considering only one or two options, and instead widen our perspective so we can see the full spectrum of options that are available to us.

Chip Heath and Dan Heath are the authors of the new book Decisive: How to Make Better Choices in Life and Work, as well as the previous bestsellers Switch and Made to Stick.

My NYT Room for Debate column: Should Kaiser Permanente be a national model? 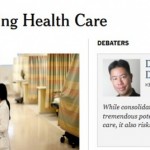 Why coroners should fill out death certificates

How a smart process helped Kaiser Permanente save lives
2 comments