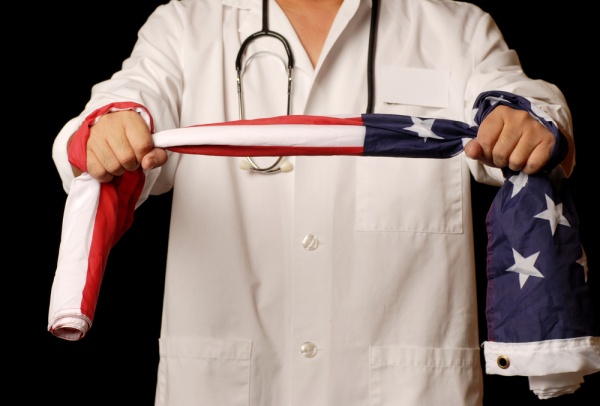 The weakest aspect to Obamacare is in its cost control strategies, or lack thereof.  The predicted savings from converting to electronic medical records (EMR) have failed to materialize.  And the Rube Goldberg-esque plan to save money by penalizing hospitals and doctors for having poor HCAHPS scores has reaped its own set of unforeseen complications.

HCAHPS (Hospital Consumer Assessment of Healthcare Providers and Systems) is the Press-Ganey survey tool that Medicare has decided to use as its sole objective instrument in determining relative hospital/physician “quality” rankings.   A low HCAHPS score puts a hospital system at risk of forfeiting up to 1% of its Medicare reimbursements.  High scoring systems can actually receive bonus payments.  Further penalties are accrued by hospitals for having high readmission rates after coronary events or pneumonia.

And what sort of valuable information is contained in these highly scientific and statistically predictive surveys?  Surely something about surgical outcomes or survival rates or some other such objectively measurable metric, right?  Actually no.  Here are the survey questions pertaining to the assessment of how good a physician has performed:

Doctors who don’t receive top marks for these three questions risk being penalized, especially if they are employees of a giant healthcare consortium that depends on high HCAHPS scores for optimal profiteering.  The facilities themselves are graded according to a variety of criteria, all tenuously (at best) related to the provision of high quality healthcare.  Factors like room cleanliness, hallway silence, ultra-friendly nurses, prompt bedpan washouts, and how well side effects of medications are explained to you collectively form the basis for decisions to transfer of billions of dollars in Medicare funding from one hospital system to another.

Private hospitals are quite aware of the consequences and are proactively doing everything they can to minimize any loss in profits due to poor scores.  Armies of bureaucrats and patient advocates are hired to maximize the “patient experience”.  Employed doctors undergo specialized training courses in “customer servicing” in order to specifically raise their personal HCAHPS scores.

But what about the larger safety net hospitals who service a disproportionately high number of patients from lower socioeconomic strata? These facilities often run rather tight margins and don’t have the wherewithal to throw around cash on image consultants.  Furthermore, the patient population that utilizes the big tertiary care centers tend to be less compliant with medical instructions.  They don’t take their pills.  They don’t follow up with their doctors.  And they tend to be re-admitted at a much higher rate.  As a result we end up with this:

So-called safety net hospitals, which provide a large amount of care to low-income and uninsured patients, also are more likely see payment cuts under the initiative, the research found.

About 45 percent of safety-net hospitals are likely to be highly penalized compared with 30 percent of hospitals that don’t serve a significant number of low-income and uninsured patients, based on the findings.

In other words, the hospitals which can least afford cuts in reimbursement are the ones most likely to be penalized.  Meanwhile, profitable boutique hospitals in the suburbs can continue to marketize healthcare (more unnecessary MRI’s, more hip replacements on 85-year olds, more screening tests and more laboratory studies) without any recriminations whatsoever.  Because healthcare isn’t about healing the sick anymore.  That’s so 19th century.  In consumer driven, marketized modern healthcare the idea is to optimize the experience.  And make a gazillion dollars while you’re at it.

Let no broken hip go unfixed: When a surgeon fails to communicate