She was 94-years old with advanced Alzheimer’s. She thought it was 1954 and asked if I wanted tea. Not a bad memory for someone in a hospital bed with a broken left hip.

She’d fallen at her assisted living facility. It was the second time in as many months. She’d broken her collarbone on the previous occasion.

Over the past year, she’d lost 30 pounds. This is natural in the progression of Alzheimer’s. But it’s upsetting to families all the same.

My patient was lucky. She’d lived to 94, and had supportive children who were involved in her care. Her son had long ago been designated as power-of-attorney for her health care. This meant officially that his decisions regarding her care were binding. She was not capable of making sound decisions, medical or otherwise.

The patient had been under the care of a geriatrician. His office chart told me that the option of hospice and palliative care had been discussed with the family. They were interested in learning more; the son had agreed that “Do Not Resuscitate” status was appropriate for his mother. Doing chest compressions on a frail 94 year-old is something none of us want to do.

The morning after her hospital admission for the broken hip, the medical intern called me with an ethical dilemma: “She’s DNR,” the intern explained. “She’s having intermittent VTach on the monitor, and I fear she won’t be stable enough to have the hip repaired. The family is open to the idea of hospice, but I don’t know whether to treat the arrhythmia or not.”

Elaine (not her real name) is one of our brightest interns. She’s thinking about going into geriatrics. Situations like this are in many ways the most meaningful for doctors. Too often we stress about minutiae at the expense of the big picture; helping guide a family and patient through a period of critical illness is of true service.

“Bearing witness is our most important role,” a mentor once taught me.

I came in to round with Elaine. We went immediately to the patient’s room. The son and one of his sisters were there supporting their mother.

In the bed I saw a pale, thin, older woman who appeared to be lying comfortably. I asked her if she was in pain. “Would you like some tea?” she asked.

We proceeded to discuss the medical issues with the patient’s son and daughter:

“What would your mother want?” I asked them. “If she could decide for herself, what would her goals be?” Given her frailty, even with repairing the hip she’d never walk again.

Understandably, the concerns were about her suffering and feeling pain. At the moment, we were all in agreement that she looked comfortable. I broached the subject of not doing anything to treat the arrhythmia or the broken hip–of not putting the patient through surgery.

The son was clear. “She wouldn’t want surgery,” he told us. His sister agreed. Consensus! We would refer her to hospice. She’d live out her days in comfort, forgoing the indignities of further medicalization.

At that moment, the orthopedic nurse practitioner walked into the room, carrying a consent form. She approached the opposite side of the bed. Before she could launch into her speech, I cut her off. “The family has decided on hospice,” I informed her. I asked to speak with her outside.

“We’ve only not operated on two occasions that I can remember,” the nurse practitioner told me. Her comment unnerved me. Clearly we were deviating from standard operating procedure here. “If a hip’s broken, we fix it,” is what she was telling me.

She documented our conversation and the fact that the family had declined surgery in the chart.

I went back in the room. I asked the family if they had any more questions. Satisfied that we’d answered everything to the best of our abilities, I excused myself and Elaine. We thanked the son and daughter for their courage, and affirmed that I thought they were making the right decision to forgo surgery.

Outside the room, we debriefed about the encounter. I was very proud of Elaine’s poise in a difficult patient/family situation, and how well she reasoned through the multiple options. I told her that I admired her instinct to mitigate harm to the patient by not over-medicalizing the situation, as many would have done since it’s almost always the path of least resistance in the hospital.

Alas, we congratulated ourselves too soon.

The next morning I came in to round. The patient’s name was still on our list.

We went to her room. She wasn’t there. But the bed was missing, too.

“Did the patient in 1214 get transferred to hospice?” I asked to no one in particular outside her room.

I was furious. A patient whose dying wish was to be made comfortable, at 94 with dementia, severe weight loss, who’d never walk again, had been “taken” to the operating room, possibly against her family’s wish to have her broken hip “pinned?”

How had this decision been made? Who’d made it? And why the fuck had nobody talked to me about it? As the attending physician, I was legally and ethically responsible for the care of the patient.

I called the OR. I got the surgeon on the phone. “This patient had an advance directive. Her son, who’s her power of attorney, wanted her to go to hospice. What’s she doing in the OR?”

“I’m just covering my colleague,” came the reply. “He consented her. I’m just going to “pin” her hip, not repair or replace it. Please clarify this with the family and let me know what they want to do–as soon as you can–she’s already on the table and the spinal’s been administered.”

Great. The train had not only left the station, it was already hurtling down the tracks. I did not appreciate the “covering” surgeon’s passivity. He was just doing what he’d been told. Hey, fella-how about taking some responsibility to clarify and verify things before cutting on anyone? Did it strike you as weird to take an emaciated, demented 94 year-old to the operating room?

Apparently not. Not at all. I remembered the nurse practitioner’s bizarre comment from the day before: “We’ve only not operated on a broken hip twice.” Is that because those patients were already dead?

I found the family in the surgical waiting area. Oddly, it was the patient’s other two daughters, not the power-of-attorney son and nurse daughter with whom I’d spoken the day before.

“Did you and your siblings consent to this procedure?” I asked them. “Yesterday your brother and sister told me that they wanted no further intervention; they wanted your mother to go to hospice to live out her remaining days in comfort.”

“Well, yes,” one of the daughters told me. “They told us it’s a minor operation and will just “stabilize” things before she goes to hospice. They warned us that she’d be in pain any time she moved, and we didn’t want that. Isn’t this the right thing to do?”

With all my soul I wanted to scream at her, “Let your poor mother die! Why on earth would you subject her to this ridiculous “operation” and spinal anesthesia? And what the fuck kind of surgeon comes by after the decision has been made and brainwashes a poor family into an unnecessary operation and doesn’t have the courtesy to discuss the “plan” with the attending physician?”

But I didn’t say that.

She needed my support. “Well, this is among the most difficult situation anyone ever faces,” I said. “There’s no right answer. For some people, NOT doing surgery would be the right decision. For others, a sense of fixing what’s broken will seem like the right course of action.”

I asked the two sisters if their brother and other sister had agreed with this. I was surprised that they weren’t there at the scene. Perhaps the power-of-attorney brother who’d made a resolute decision a day earlier based on what his mother would have wanted had changed his mind. Perhaps he’d felt guilty disagreeing with his sisters, and wanted consensus above all else. Perhaps it really was a “minor” procedure and the right course of action to mitigate the mother’s suffering.

But I’d seen her in her bed. She’d smiled at me. She’d discussed having tea. She wasn’t writhing uncomfortably or looking in distress.

I was angry. Had the consenting surgeon simply seen dollar signs? No broken hip goes unfixed? He’s a hammer and the patient was a nail?

Let me take the high road: Maybe he genuinely believed that pinning the patient’s hip would improve her quality of life in the days she had left. Maybe he had some evidence I’m unaware of that pinning hips in demented 94-year-old patients is the most efficacious plan of action. All bow down before the gods of evidence.

But he should have spoken with me. As a colleague. As a professional. As the one responsible for the patient’s care. Maybe he could have persuaded me that this was the right thing to do. Maybe he’d have even turned the tables and shown me that I was the one being inhumane. After all, how “right” is it to send a feeble old woman to die with a broken hip?

It’s too bad for all involved here that his thought process was not made transparent. He and I will clearly be having a conversation, likely with hospital administration in attendance, about what happened here. This is a conversation we should all be having.

Caring for the emotional needs of a cancer patient 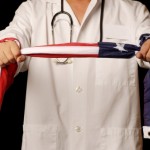 Let no broken hip go unfixed: When a surgeon fails to communicate
42 comments