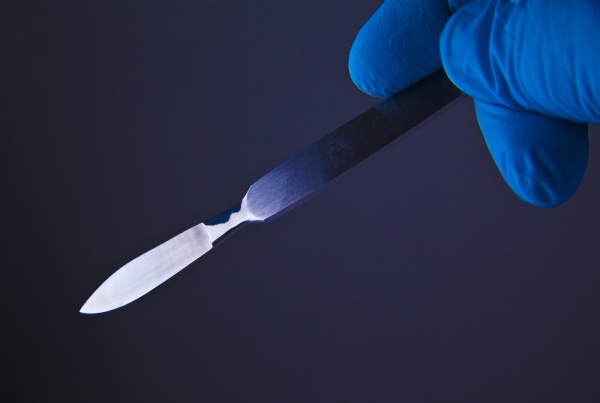 The preliminaries are over. Sponges, needles, and instruments have been counted and checked, their number recorded on a whiteboard on the wall, as well as a clipboard. The checkoff is a comforting hum of words; the tuned machinery of the workplace. As the bottle of local is opened and poured into a sterile bowl on the back table, the expiration date is read aloud. “January, Two Thousand Ten.” “We’ll be done by then,” I say, as usual. I look over the ether screen and ask the anesthesiologist, “OK to start?” “Dig in,” he says.

Scalpel blades come in myriad sizes and shapes. #15 for a delicate cut, needing controlled curvature, like around the edge of an areola. With those little pokes for insertion of laparoscopy tools, it’s #11. This being the real deal, I use a #10 blade, for its deep and long belly; a serious cutting device, but wieldy. There are bigger knives.

The act of incising human flesh is one of moment, never light, never routine no matter how familiar. Having thought about the exact location and length — not always standard for a “standard” operation — and having spoken to this person only minutes before; having made and accepted an awful commitment, asking for and taking trust; still, to take a knife in hand and with it to open a wound is a startling event. I never feel as focused, as intent, as responsible as when I make that first cut. I’m aware of transgressing, of forced entry, of crossing barriers, physical and ethereal. It’s like passing through an arbor draped with not entirely familiar vines, ominous and appealing simultaneously, not quite seeing to the other side until they’re pushed away, with resistance. It’s OK. I’ve been given the key, evidently I’m allowed here. But is such a thing possible? It remains a mystery. My breaths are shorter and harsher than normal; my pulse perhaps a few beats quicker; it never fails to excite me. Yet (almost) always my hands are steady. At this moment, there’s nothing else. Later, as it goes, the air gets lighter.

How the knife is held is dictated by the task at hand: sometimes, in the finger-tips; others, like a pen, pinkie down on the patient as a steadying unipod. For a full-fledged incision, my last three fingers curl around the handle, thumb alongside the blade, index finger on top, right over the belly of the blade. As I make the cut, depth is controlled by that index finger, sensing the resistance and the ease with which the knife penetrates. Not everyone is the same: some skin is thick and leathery, some nearly translucent and feathery, like a summer roll. One has to adjust, on the fly, eyes bright and shiny, central also to the feedback loop. I push hard, aiming to swipe through the skin and fat and to the muscle, even through it, in a single motion. A perfect incision, to me, is one that exposes the peritoneum with the first sweep. It’s not always possible (only in the slender), or safe, and safety is paramount. But time spent doodling in an incision is time wasted and probably deleterious. (I’ve mentioned it elsewhere: few things surgical bug me as much as the tendency of many surgeons to incise partly through the dermis, to finish it off with electrocautery, and then to cook their way through the fat layer as well. It takes a ridiculous amount of time, fills the air with stinky smoke, and leaves behind a thin layer of dead tissue which, theoretically at least, interferes with healing. When everything else important has been studied, I’d guess a comparison of that skin technique with straight-through sharpness would show a cosmetic disadvantage as well.)

The best surgery is the most efficient: wasting the least amount of time, leaving behind the smallest possible areas of damaged tissues. The first cut sets the tone; it signifies where you stand. That brisk and controlled savagery is exactly what’s called for; a promise fulfilled, senses keen. Cautery is one step removed; it’s a barrier between you and your patient; shorthand, cheating. (As you’ll see, I use it all the time, and extensively, when it’s the most efficient option. For the initial incision, it’s wrong logically, physiologically, economically, historically, metaphorically, artistically, poetically.)

I think if you watched an incision being made in super slow-motion, you’d see the skin indent under the knife and, as it is drawn forward, a wake of skin rise slightly in front of the keel of the blade. If there were sound, it would be a shishhhh; if it were music, it would be strings, not brass. Laying the scalpel nearly horizontal at the outset, as soon as the skin is penetrated the handle is elevated a wisp, bringing the blade’s belly more fully frontward to the pull. The thickness of the skin is revealed as it falls slightly away. (In a belly bloated by ballooned bowel, the skin springs away from itself, as if to run from the explosion to follow.) Interesting, isn’t it: seeing skin in cross-section? Bleeding — especially in the midline — is most often minimal, easily controlled with a little pressure, the placing of gauze along the edges. In some, time must be taken. Classically, little clamps were placed, their noses snipped just to the open end of the bleeder, to be followed with a fine tie. Delicacy required: the purchase on the tiny amount of tissue was tenuous; tying the knot after the clamp was gone, if done too artlessly, saw the whole thing pull away and the bleeding resume. “Off!” the surgeon would say to the assistant, signaling the release of the clamp just as the index finger met the knot. Then holding each end and throwing more knots with such grace as to cause not a waver of the held tissue, increasing tension equally on each end as the knot is tightened — too much in either direction and it pulls off — laying down a couple of loops until secure. If you can do it, you might be a surgeon. (The time-honored practicum: tying a knot around a single match in a matchbox, never lifting it out nor bringing it to the edge.) But having proved it long ago to my satisfaction, I use cautery now, like everyone else. Still, there are a few right ways and lots of wrong ones.

If you fire off the cautery in a pool-let of skin-blood, the blood will eventually boil and blacken, and maybe the coagulum will plug the leak. Some will keep up that untidy turmoil for a disturbingly long time, to their own “goddammit”s, red continuing to seep around the edges of the black. Some move the tip around nearly randomly, waving it a little, like shaking a dick at the end of a piss. If that works, it probably didn’t need it in the first place. Or they paw at the bleeder with a sponge, then zap, then paw some more. Whack, buzz; whack, buzz. If it’s brisk, it doesn’t work: by the time you take the gauze away there’s enough blood to obscure the exact spot. But if you place a gauze and roll it away, you can hit the bleeder right as it appears. Or you have your assistant lift the edge of the skin with fine forceps, then grab the bleeder with a forceps of your own, and touch the cautery to the metal. A spot-weld. Precision.

The six-pack muscle, the rectus abdominus, is separated vertically in the midline by a fibrous band, the linea alba (“d” in the illustration). In the healthy, it’s broad and thick, and the much-loved target of a vertical midline incision, because it’s nearly bloodless, tough enough to hold a good stitch, and affords entry into the abdominal cavity without cutting muscle. By “broad,” I mean a few millimeters. It’s possible to miss it when cutting down to it; in fact, it seems I always did as a junior resident. The first time I cut into it, I was attempting a paramedian incision (rarely done: ordered for the experience by my attending), aiming NOT to be at the midline. In time, I got the hang. The only incision that has a chance of being that “perfect” one, cutting down to (but not through!) the peritoneum in a single heraldic swath, is through the upper midline, in a person not much overweight. In the lower abdomen, the place chosen in our imaginary patient here, the white line (which is what “linea alba” means) becomes less distinct, a little more narrow, and pastier, because the rectus muscle loses its posterior fibrous covering. Cutting into the lower midline is gooier somehow: less sturdy. But do it we must.

And since we’ve digressed from the particular cut of our aim, let’s also take a moment to get real: surgeons may or may not be crazy, but there is a form of schizophrenia at work. Those things I said up there? Totally true. The ever-present awe, the sense of responsibility and privilege and focus, the third-person look at myself in perpetual disbelief: all true, all the time. And yet the mind allows room, simultaneously and up front, for the mundane. Along with the tonal beeps and the tubular hisses, as I pick up the knife and make the cut, there’s this sound: “So Joanie, how was your weekend?” Omnipresent OR humor: usually crude, often — when the audience is known — sexual. Despite being taught to do otherwise, irrelevant conversation is the norm. Just so you know. And music. Personally, I’m neutral about it: I usually enjoy it, with an omnivorous taste. But I can live without it. And when things get gritty, I ask for the music to go off, and for an end to extraneous talking, for as long as it takes to smooth things up. Speaking of talking, I seem to have blabbed all the way through the incision. Let’s get more detailed, and back on point …

The act of incising human flesh is never routine
2 comments