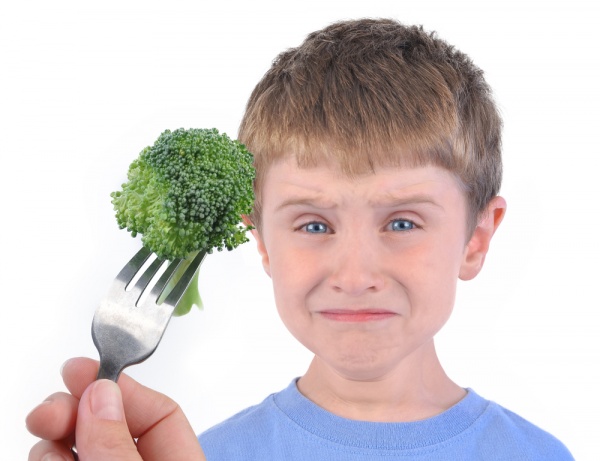 If only it was as simple as looking into our old Magic 8 Balls® to find out if it is “very doubtful” or “decidedly so” that refusing to stop at the Good Humor® truck on the way home from school will be the right thing to do for our children. It is worries like this, along with the challenge of raising children in a fast food, commercial-filled nation, that causes us to raise kids whose diets consist primarily of pasta and chicken nuggets. The truth is that we don’t know if controlling our kids’ food choices will result in food issues when they become teenagers and adults. But we can be sure that subsisting on processed food isn’t good for their growing bodies.

My expertise on this subject comes from being an MD, a nutrition specialist, a healthy eater since my cancer diagnosis 14 years ago and, above all, a parent. Before I became a mother, I looked on with bewilderment at all those young, picky eaters who shook their heads and sealed their lips to guard against healthy food entering their mouths; and their parents’ attempts to cajole, threaten or bribe those children to get them to at least taste it. Could it really be so hard to raise children who would eat a healthy diet? Eight years later, I see that it is possible to raise children who enjoy vegetable juice, beans, guacamole and pumpkin seeds. All three of my children eat beautifully, but now I know that it takes daily effort and a strong conviction that healthy eating is as important for our children as anything else we do for them.

Here are some of the reasons people end up with children who don’t eat well:

1. Parents are afraid to say no. It’s not just that they don’t want to create an ice cream binger. It’s also that feeding our children is a way to nurture them and show our love. It is so tempting to give them treats like french toast or chocolate chip cookies just to see their joyful faces, especially if that was one of the ways our own parents showed their love. The question is, can we break this cycle and express our love with healthy foods?

2. Parents think it’s okay for kids to eat junk food in moderation. Even though parents themselves might not indulge, we are told kids can eat it “in moderation.” But what exactly is “moderation”? Once a week? Once a day? What would be a moderate amount of a chemical like artificial color, which some studies have linked to hyperactivity? Perhaps we are lulled into thinking kids have years to go before they have to worry about calories or fat. But the truth is that even babies have been found to have the early stages of plaque in their arteries, childhood obesity is considered an epidemic, and type 2 diabetes, once only an adult disease, is now all too common in children.

3. Doctors recommend it and schools provide it. Many of our pediatricians tell us we are supposed to feed our kids Cheerios® starting at 10 months old so they can work on their pincer grasp, never mind that the cereal is highly processed and full of simple carbohydrates which quickly turn into sugar in the body. Besides, anyone with kids knows they fine tune their pincer grasp by picking up the tiniest specks of dirt off the floor and skillfully putting them in their mouths. In addition to the doctor’s office, the other surprising place kids get exposed to unhealthy foods is school. It begins with the mommy and me groups, where children are handed goldfish crackers to snack on, despite that they are high in sodium and simple carbohydrates; or, worse, graham crackers, which are nothing more than cookies hiding out in a box labeled “crackers,” alongside apple juice, another hefty serving of sugar. By preschool my kids were served cookies or cupcakes, often with bright pink or blue frosting, at least once a week to celebrate a birthday or holiday.

4. It is appealingly easy to make a ready made meal we know our kids will eat. “Nuking” chicken nuggets that have been scientifically formulated to please the little ones or boiling up pasta takes a lot less energy than standing in the kitchen for an hour or two to make a meal. Understandably, after working all day inside the home or out, that may not be so enticing, especially in our over-scheduled, highly intense culture, where spending hours in the kitchen is no longer considered time well spent.

Whatever the cause, the question is, what to do now? Whether you have a clean slate with an infant or are trying to change directions with an older child, here are some suggestions.

1. Make sure your children are really hungry for dinner (or whatever meal you are serving). So, for example, don’t allow them to have any sweets or too much bread after school. If it is two or three hours before meal time, provide only fruits and vegetables if they are hungry.

3. Let them be involved in some aspect of food prep. My son once found some kid-friendly recipes online and became totally enthused about making and eating ants-on-a-log (nut butter and raisins on celery). Or, with your careful oversight, let them cut up or peel some veggies, or even just turn on the blender. It only takes me twice as long when my kids help me make a recipe, but it’s worth it (usually!) because they are so much more interested in tasting what they made.

4. If you can sit down to eat together, do it. Kids are so affected by what they see their parents and each other eat. Mind you, I haven’t had a relaxing dinner in the three years since we started eating with our kids, but I remain optimistic that one day soon it will happen.

5. Don’t push kids to eat something if they really don’t want to. When my daughter, the pickiest eater in the family, was younger and would balk at the lentils and brown rice I’d cooked for dinner, I would have easy, healthy backup options available that I knew she liked, such as a handful of pistachios or whole grain crackers and hummus. Eventually, whether it was that she was bored with the backup foods or inspired by seeing everyone else eat the lentils and rice, she started eating it, too.

6. Your child may need to try a new food 10 to 15 times before he is willing to eat it. That’s how it was with my daughter and vegetarian chili. Now she eats it, more or less happily, as long as I pick out the carrots and onions before I serve it to her!

7. Feed your children the same food you eat. This is particularly helpful if your children are fairly new to eating solids. As long as your children can chew the food, there is no reason their menu at home and restaurants should look any different than yours. That way they will have the opportunity to experience the textures and colors of ‘real’ food and not become partial to the soft, white food kids are usually offered.

8.Your children are smart! Talk to them. Explain why you are making the changes you are making — that you love them and are concerned about their teeth and their bodies. You want them to grow up to be healthy and feel well. They may not like the changes, but understanding them should help.

9. Don’t underestimate your kids. My oldest just had his 8th birthday with 14 friends, most of whom eat standard American fare. Although he convinced me to serve regular pizza (I had resisted for many birthdays), I put out piles of grapes, sliced apples and cucumbers all along the table instead of chips. By the end of the party, almost all were gone. I considered the victory to be mine!

Inconveniently, we don’t yet have research that tells us more reliably than the Magic 8 Ball® whether denying our children junk food will harm them, particularly when they see their friends indulging. However, we do have a multitude of studies that clearly show how unhealthy these sugary, fatty, processed, artificial foods are. Changing your children’s diet may seem daunting no matter what their age, but it’s not going to get easier as they get older, so now is the time to start! I know it is possible.

This hasn’t just worked for my family. It’s worked for everyone else I’ve seen who follows these guidelines. You would do anything to raise healthy and happy kids. Why not make their diet a priority, too?

Lilli B. Link is an internal medicine physician and nutrition specialist.

Needle exchanges: When the perfect is the enemy of the good

10 reasons why your kids are picky eaters
11 comments