An editorial by two oncologists in the New Year’s issue of Annals of Internal Medicine discusses overdiagnosis, a controversial health problem that some have called “a modern epidemic” but others, including the editorialists, feel is a minor concern. Although many chronic conditions are overdiagnosed, cancer is the most thoroughly studied, as well as the most emotionally charged.

I am a generally healthy man with no family history of significant health problems. Yet increasing numbers of men like me who are approaching middle age may be shadowed by a sniper on a rooftop, each armed with a highly accurate loaded rifle pointed directly at our heads. By age 70, nearly half of all men will be shadowed by a sniper, though in only 3 percent of us will he actually take the fatal shot. A 1 in 30 chance of being assassinated without warning still seems too high, and therefore health authorities concerned about the problem of snipers on rooftops recommend that all men after age 50 (or perhaps 40) be offered routine surveillance to determine if there’s a sniper up there. If there is, perhaps he can be safely disarmed.

The  trouble is, the disarmament team is successful at best, 21 percent of the time (reducing a man’s chance of being shot from 3 percent to a barely more reassuring 2.4 percent), and at worst, hardly ever. In addition, attempts to subdue snipers by force often lead to unwanted consequences: stray shots fired in the scuffle that cause non-lethal but persistent injuries to the bladder and reproductive system. In about 1 in 300 men, the attempt to disarm the sniper goes terribly wrong, causing the gunshot to miss the head but deliver an equally fatal round through the heart.

Oncologists and others whose careers primarily consist of treating cancer argue that the true problem is not one of overdiagnosis but overtreatment, and that a more conservative approach to management (rather than less diagnosing) of indolent cancers will solve the problem. Let’s not rush in to disarm all of the snipers, they say – instead, let’s watch them for signs of aggressiveness and act later if necessary (termed “watchful waiting” or “active surveillance”). Men who choose this option live the rest of their lives with the anxiety-provoking knowledge that guns are pointed at their heads, however small the possibility of a shot. They and their physicians may become so obsessed with the sniper, constantly scanning the tops of tall buildings, that they forget to look both ways when crossing the street and succumb to some other preventable cause of death.

A reasonable objection to my analogy of the sniper on the rooftop is that unlike a bullet to the head, death from cancer is neither quick nor painless. By measuring deaths averted as a primary outcome, the argument continues, one minimizes the benefit of sparing patients the symptoms and treatment of metastatic disease (in other words, “there is more to life than death.”) This argument only holds in cases when cancer was destined to progress enough to cause symptoms (not overdiagnosed). I don’t discount it, having witnessed firsthand the suffering that metastatic prostate cancer inflicts on patients, but cancer is hardly unique in this regard. There is, unfortunately, a great deal of suffering involved in slow deaths from non-cancerous causes such as congestive heart failure, chronic obstructive pulmonary disease, multi-infarct or Alzheimer’s dementia. To be worth the price of overdiagnosis, cancer screening should do more than replace one cause of death for another.

Back to the Annals editorial about overdiagnosis in breast cancer. The authors write:

Essentially, this boils down to: overdiagnosis be damned, let’s find all of the cancers we can, and then worry about what to do about them later. (Let’s find every single one of those snipers on the rooftops and then decide if and when they should be disarmed!) On the contrary, I believe that individual women (and men, in the case of prostate cancer) should be presented statistical information about overdiagnosis along with potential benefits and then offered a choice, rather than a default option. Some – perhaps most – women will choose to be screened, despite evidence that more than 3 in 10 breast cancers are overdiagnosed. Others will not. The latter should have their choices respected, rather than be harangued or fired.

Finally, I apologize to any of you who were offended by my explicit comparison of overdiagnosis to gun violence, given the recent tragedy that has drawn belated attention to the latter as a public health problem. Although not as immediately devastating or newsworthy, overdiagnosis is a formidable public health problem in its own right, an epidemic that has affected millions of men and women over the past few decades in cancer alone. It deserves attention, not dismissal, in the pages of major medical journals. 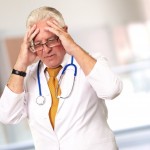