Add to the growing list of reasons antibiotics might not be good for you and your children: a recent study showing a statistical link between early ear infections and inflammatory bowel disease (IBD).

Researchers in the UK analyzed data from about a million children, looking specifically at the 750 who developed IBD (Crohn’s disease and ulcerative colitis, mostly.) They then compared the kids with IBD to children without that diagnosis, and looked back at the frequency of prior ear infections. Ear infections are the most common diagnosis leading to the use of antibiotics in young children, so it was figured that more ear infection diagnoses were a good marker for more antibiotics.

IBD is a complex illness. It seems to be related to altered immune regulation in the gut and other tissues. It’s been speculated that the normal bacteria in the gut help with the early formation and control of the immune system.  Early antibiotics could indeed interfere with that process, and are a plausible trigger for IBD, at least in people who are genetically predisposed. There are probably other factors at work, too.

Indiscriminate antibiotic use is bad news. It contributes to the development of resistant superbugs, and may play a role in the development of obesity, allergic disease, and asthma. Insidious forces can sometimes encourage the perceived “quick fix” of an antibiotic prescription—including rushed doctors, exasperated parents, and a health care system that rewards “satisfaction” over health. If you want to protect your child from unnecessary antibiotics, you have to ask a few questions:

And, of course, remember that prevention is always better than cure. Keeping your child up to date on vaccines—including influenza vaccination—prevents both bacterial infections and some viral infections that predispose to ear infections and other antibiotic temptations. Nursing, avoiding group care, avoiding second-hand smoke, and not bottle-propping—all of these can help prevent at least some ear and other infections.

There will be times when an antibiotic is a good idea—I don’t want parents to be afraid of them when they really are necessary. But parents and doctors both need to take an active, thoughtful role in deciding when antibiotics are really a good idea.

MKSAP: 67-year-old woman is transferred to the ICU

What good coaching has to do with medicine 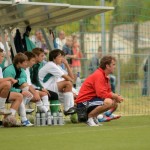