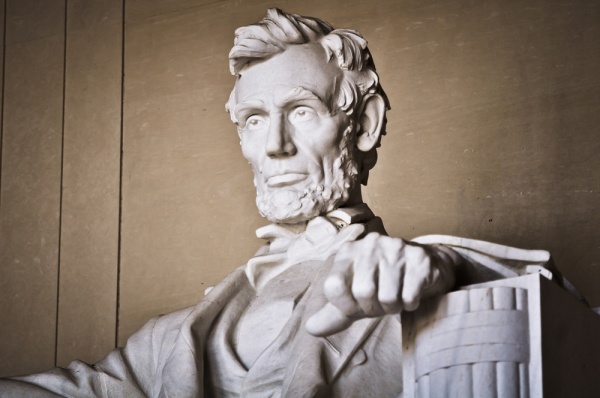 “Passed by corruption, aided and abetted by the purest man in America” is how anti-slavery Congressman Thaddeus Stevens described President Lincoln’s successful effort to enact the 13th amendment, banning slavery.   This historically accurate quote, which runs counter to the public image of “Honest Abe” Lincoln, is among the many  fascinating  stories recounted in the Steven Spielberg’s masterpiece  “Lincoln” playing  now in movie theaters nationwide.

The movie doesn’t claim to get every fact right, but its description of Lincoln’s single-minded determination to get the 13th amendment passed by Congress in the final months of the Civil War– over the objections of his own advisors and knowing he initially was at least 20 votes short– is spot on.  And to get the votes he needed, Lincoln did whatever he thought was necessary, including offering jobs to lame-duck members of Congress who had lost re-election.  (This practice was not illegal at the time, although undoubtedly ethically suspect).   Today, offering jobs for votes would be against the law and grounds for impeachment.

But the movie depicts Lincoln’s commitment to banning slavery in an extraordinarily favorable light.  Human bondage was such a moral wrong, the source of misery for enslaved millions, and the cause of heart-breaking bloodshed for the entire country, that if there ever was a case of the ends justifying the means, this surely was it.

The film depicts “politics as hand-to-hand combat, and it portrays Lincoln not as idealist or moralist but as pragmatist and realist. Doing so does not diminish him but elevates him.”   For his efforts, though, Lincoln was called a tyrant by his critics.

There are lessons from Lincoln that we might keep in mind as we consider our current political divisions.   As much as the fight over taxes and spending cuts seem like a big deal to us, and seemingly outside the reach of compromise in an ideologically polarized Congress, it is not even close to the stakes and divisions Lincoln faced over the 13th amendment.   The movie shows the unseemly side of politics but also shows members of Congress acting in an extraordinarily honorable ways:  voting their consciences, voting against the position of their own (in this case, Democratic) political party, and putting their careers at risk for voting for the amendment.  It shows abolitionist Thaddeus Stevens tempering his rhetoric in favor of full equal rights for African-Americans in order to win votes for the amendment.

Wouldn’t it be something if there were more members of Congress today who would vote their consciences and buck their parties?  Who would be willing to hold their tongues and compromise when needed to advance long-term priorities?

The lesson we can learn from Lincoln is that politics can be both high-minded and unprincipled.  The process of getting legislators to vote your way always has, and always will, involve some degree of wheeling and dealing. So it was in Lincoln’s time, so it is today.

To be clear, I am not arguing in favor of offering jobs or money for votes, or selling out to the highest bidder, or even bending the rules by flying members of Congress around in corporate jets to elite golf outings.  Those things today are for the most part illegal, and we are better for it.

But let’s stop looking at politics through Rose Colored glasses.  ObamaCare’s critics got themselves into high dudgeon over the “backroom deals” the Obama administration made to win support from interest groups and individual Senators (The Democrats were equally indigent when House Republicans kept the vote on Medicare prescription drug coverage open for four hours in 2005 to arm-twist the final votes they needed for passage).

The promises made to get interest groups and lawmakers on board with Obamacare (all legal, by the way) don’t come close to the “do what every is necessary” Realpolitik exercised by Lincoln.   But as the National Journal’s Jill Lawrence writes “If Lincoln were operating now, though, Americans would be following all the wheeling, dealing, and good-government lamentations in real time on Twitter and cable TV. I’m guessing there would be plenty of cynicism, and certainly no halo — at least until decades later.”

I am not equating ObamaCare to ending slavery, by the way.  For all of the good that health care reform may do in my opinion, it doesn’t rise to ending slavery.  Nor am I saying that Obama is the measure of Lincoln:  no one today can say how Obama’s presidency will be viewed by historians, and Lincoln sets such a high bar that it unlikely that any contemporary politician will come close.

But I am saying  that sometimes achieving a principled end—like covering the uninsured—requires a certain degree of arm-twisting and deal-making.  Sometimes, the end (within reason) does justify the means.  Jill Lawrence concludes that the film “exalts ends without sugar-coating means, and holds out the promise of vindication — in history, if not their lifetimes — for leaders who wield their ‘immense power’ to perfect the nation as they see it.”   Just take it from Honest Abe.

What patients can learn from public hospital ratings

What Lincoln can teach us about health reform
2 comments