I think horses can teach us some things about health promotion. We invoke them routinely, although I suspect we are unaware of it much of the time.

Three of the more salient themes in modern health promotion involve incentives, disincentives, and what/how much people drink — with a particular emphasis, of course, on less soda, and more water. I hear hoofbeats in all of them.

Incentives are particularly prominent in worksite and online health promotion programming, where financial rewards are used to encourage the pursuit of health. Disincentives figure in policies, from taxes to bans to regulatory restrictions. Noteworthy illustrations are the efforts to tax soda, and the large soda ban in New York City.

The focus on soda, and growing body of evidence linking it to obesity, readily signify the relevance of what people drink.

So the predominant efforts of health promotion might reasonably be catalogued in terms of carrots, sticks, and leading people to water — whether or not we can make them drink it. Which leads, naturally, to horses.

As it happens, both horses and health promotion are important to me. Health promotion is what I do, and my professional ambitions are all tangled up with it. My hopes for one day going gentle into that good night hinge on making some meaningful difference in this domain.

Whenever such professional ambitions get a few hours off, however, there are horses. If I have a little time for recreation, my general preference is to spend it in the saddle.

I am privileged to be the beneficiary of excellent instruction in hunter/jumper riding for the past 15 years or so. Then, last year I rode for the first time as a guest with the Fairfield County Hounds, and was hooked. I joined the group once they conceded to have me, and got a horse of my own — Troubadour.

Over these years, I’ve spent quite a bit of time with horses. I now spend even more time with my horse, Tru. All the while, I’ve done my best to listen to the whispering.

Whenever I visit Tru, I bring carrots, which he clearly loves. Whenever I ride, I carry a stick. And out on the trail, every now and then, by design or happenstance, I lead him to water.

I rarely use the stick. This is because Tru is a good horse, generally inclined to do all the right things. The stick is punishment, and Troubadour doesn’t deserve to be punished. I think we might reasonably infer the same is true of all the people health promotion is intended to help. Lesson one.

When is the stick useful — for a good horse, or good people? When irrational fear runs amok, when obstacles are imagined.

The stick is useful in such situations. It is a goad. If, for a moment, the stick is scarier and more preoccupying than the hay bale or stream, it can motivate a horse past an unfounded fear. The stick is applied briefly to demonstrate: There was nothing to be afraid of in the first place. It is followed quickly by reward: both the pat on the neck for a job well done, and the relief that the stream was not home to a brigade of horse-eating crocodiles after all.

Even so, the stick is unpleasant business. For the stick to work at all, it has to be swung, not tapped. If the intent is a smack, a tickle won’t do.

I never swing mine nearly as hard as I’ve seen some people do. Still, I regret it every time — hating to use a noxious stimulus to get my four-legged friend and partner past his innate paranoias. Troubadour is my friend. If something similar might be said of the people health promotion efforts are intended to help — it argues against much use of sticks.

I think any kind of stick should be a last resort, used sparingly. I also think it needs to be a goad past an unfounded reluctance, not a maintenance strategy. The stick tends not to be about changing behavior for the long term — it is all about getting past an obstacle, often more imaginary than real.

Personal trainers and coaches use a stick all the time in just this way. They harangue us past our doubts about what we can do, and help us realize we are capable of more. But if they were wrong — if we tried to do more and got badly hurt, if the stick led to a bad outcome rather than good — we would learn to stop heeding.

If I used a stick to encourage Troubadour into a stream that proved to be as crocodile-infested as feared in the first place, or toward hay bales behind which a tiger really was crouching — things between us would fall apart in a hurry. He would learn he couldn’t trust me; and he would learn to fight the stick, and resent it. The stick only works when it leads quickly to the realization that you can get there from here, and it’s not so bad.

If we are to use sticks in health promotion — such as, for instance, a soda tax — they need to be robust enough to really matter. This has certainly been the case with tobacco taxes. Adding a penny to the cost of a cigarette pack would have done nothing to smoking rates. Making tobacco cost enough so that every purchase really hurts has made a real difference.

We don’t know for sure what a soda would have to cost before inveterate drinkers give it up, but I do know of ongoing research directed at answering such questions. We will learn in time if a stick can do this job, and if so, how big it needs to be and how hard it needs to be swung.

The short-term utility of a stick may be an even more important consideration. The stick is an inducement past one choice and toward another. For it to work, that other choice has to be there, and needs to be reasonable.

So again back to soda: Soda drinkers, encountering a tax, might try alternative beverages like seltzer flavored with fruit essence, and realize they taste just fine. A high tax on tobacco has shown many people, although not all, that they can live happily and more healthfully as ex-smokers. A stick has to lead, and quickly, to a reasonable alternative. I think there are times in health promotion when it can — but we need to be careful about assuming it will.

The one thing we know for sure about sticks is that using them doesn’t tend to make anybody happy. Horses and people, adults and kids — prefer a reward to a reprimand.

And so, I generally like carrots better. Horses clearly love them. Carrots won’t make Troubadour, or any horse, do what they are unwilling to do. But they can both encourage and reward a particular choice when ambivalence prevails.

People, for instance, want to be healthy, but it takes extra effort, resulting in ambivalence. A financial reward for losing weight or lowering blood pressure often tips the scales in favor of health.

There are many nice things about carrots. They are a reward, so doling them out feels good, not bad. There is no risk of resentment in either direction. Carrots are a nice prize, but an economical one. These can all pertain to figurative versions as well.

As for water, it’s true you can’t make a horse drink — not even with a stick. But you can lead a horse to water. And you can make him thirsty. Then the drinking is up to him.

People, of course, are not horses. But people’s routine references to carrots, sticks and water — and the lessons they imply — derive directly from our interactions with horses. So, minimally, it behooves (I couldn’t resist…) us to know what those lessons are.

I think the lessons argue for very limited use of sticks, mostly to get ourselves past obstacles that seem bigger than they actually are. I think they argue for a bounty of carrots.

And I think they remind us that we can’t decide when or what someone else will drink. We can, though, make sure pure water is readily available — and do our utmost to cultivate a collective thirst for it.

Belichick, Brady and what healthcare can learn from the Patriots 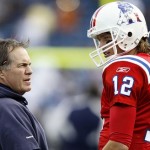 Build your network by writing a timely note

What horses can teach us about health promotion
3 comments