The difference between a job and a profession is a matter of ownership. Anyone who is applying for employment understands that the job they seek actually belongs to someone else. It is typically offered by an individual or a corporation who defines the job and determines who is qualified to perform it. If the job holder is unable or unwilling to do the work, the owner takes the job back and finds someone else to fill the position.

By contrast, a professional owns their own job, having obtained the requisite knowledge and skills through very specific education, training and subsequent experience. Each professional is also charged with being a steward of the profession they have dedicated their life’s efforts to achieving. This stewardship requires the establishment and maintenance of an accepted set of core principles, and it is those core principles that define the profession to the rest of the world.

As a physician, my profession’s core principles have been in existence for about 2,500 years. They have been modified somewhat over the centuries, but by and large they have remained relatively constant since they were first outlined by Hippocrates. His rules for the profession were relatively simple; first do no harm, always do what is best for the patient, consider the patient before self, create no mischief and keep confidential what you see and hear. There is nothing specific in the Hippocratic Oath about charges or payments for physician’s services, but it concludes with the statement, “if you keep this oath, it will be granted to you to enjoy life and the practice of this art, respected by all men in all times.”

Through the ages patients have relied on the physician’s adherence to this basic Code of Medical Ethics as the fundamental basis for the social contract, commonly refer to as the patient/physician relationship. However, in recent years we have witnessed a steady erosion of that relationship as the practice of medicine has centered more on payments than patients. When America’s physicians allowed the camel’s nose of third party payers under their tent, they invited an assault on their time-honored ethics. For decades the patient/physician relationship has been under siege by a variety of forces associated with our convoluted payment system. Does your doctor do what he or she believes is best for you, or follow some “best practice guidelines” offered by a public or private bureaucrat who is holding the purse strings?

For a century and a half the American Medical Association has been the standard bearer for the Code of Medical Ethics in this country, and at one time nearly every physician was a member of that organization. But, since the mid 1960‘s AMA membership has declined steadily until today more than 80 percent of America’s doctors are not members. The reason for the mass exodus from the AMA is simple. Most physicians believe that it is no longer representative of the core values of their profession. As a delegate to the AMA House of Delegates for the last 4 years, I witnessed for myself how the “business of the house” focuses far more on the finances, politics and social engineering efforts surrounding healthcare than it does in preserving and improving the art, science and ethics of medicine.

At the Interim Meeting of the AMA House of Delegates I was reminded of just how far our professional leadership has drifted away from its core values. The AMA President, Dr. Jeremy Lazarus, gave a speech during the opening session. He called on America’s physicians, “To move from divisiveness to diplomacy, from conflict to collaboration, from the narrow self interest of personal gain to the national interest of mutual goals.” He went on to say, “We need to have a difficult but necessary conversation with the public and our leaders about the tough choices ahead. In June, the AMA passed ethics policy that calls on physicians to be stewards of the resources society entrusts to us. To follow policies on issues such as: cost versus value. End of life care. The responsibility of patients to own their own health. The need for more public health investment. The very unsustainability of the system itself – absent fundamental change.”

Dr. Lazarus was presenting the AMA’s new strategic plan that promises to discard those core principles which are centered on the individual patient, and replaces them with a new ethical code that shifts the profession’s priorities to meeting the collective good. In his remarks he accused physicians of being selfish, suggesting that we should “… listen to our heart and be driven by science – and not the latest fad or the biggest pile of cash. Knowing in our heart that a medical school diploma is not a treasure map.” Perhaps the new AMA strategy was best summed up when Dr. Lazarus said, “It seems to me the stars have aligned in such a way that our loftiest aspirations are exactly what’s needed now to transform our health care system. And to embrace a new set of core values – ones better suited to integrated care … It once made sense for physicians to value autonomy, independence, and self-sufficiency. But the game has changed.”

This new AMA plan and strategy are merely a continuation of the organizations trend over the last 50 years, which clearly runs contrary to the traditional Code of Medical Ethics. So, it comes as no surprise that the next step will be to make the needed alterations to that pesky code. The Speaker of the House, Dr. Andrew Gurman, spoke to this issue shortly after Dr. Lazarus. He told the delegates that over the next few sessions there was much work to be done on a number of important issues. At the top of the list was the need to “revise” the AMA’s Code of Medical Ethics to be more relevant given the changing healthcare environment. The objective seems obvious. The ethics of Hippocrates simply won’t allow physicians to participate in such things as Accountable Care Organizations, pay-for-performance initiatives, gain sharing, resource stewardship, cost versus value, end of life care and other similar euphemisms, each of which translate into rationed care orchestrated by the physician.

The “brave new world of healthcare” has become one in which payers exert more and more pressure on physicians to manage costs, and professional organizations abandon their core principles for political expediency. Not surprisingly, many physicians are overwhelmed by this changing environment and feel compelled to seek the safety of employment by a hospital or large integrated system. But when they do, their commitment to individual patients becomes subordinate to the rules of their employer, and their profession with its defining code of ethics is lost forever in favor of job security.

Robert Sewell is a surgeon who blogs at The Spirit of Healthcare.

A war in the House of Medicine: Can women physicians help? 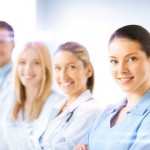 Does health reform require doctors to stray from their ethical code?
6 comments