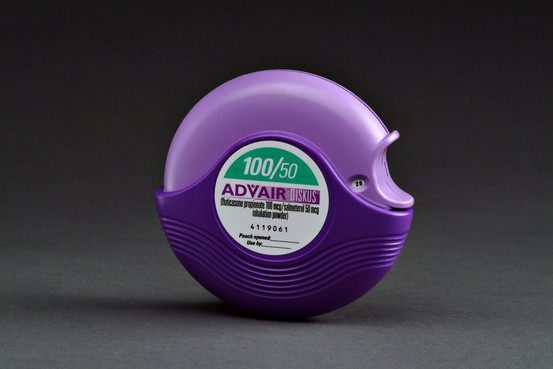 “[L]ong-acting beta-agonists have been linked to 1,900 asthma deaths from 2004 through 2011, according to an estimate provided by AdverseEvents Inc., a private firm that analyzes drug side effect data reported to the U.S. Food and Drug Administration. Because of the voluntary nature of those adverse event reports, it is likely that estimate is low…In 2008 a different analysis by a researcher with the U.S. Food and Drug Administration estimated the drugs contributed to 14,000 asthma deaths from 1994 through 2007.”

But is Advair the problem? You’d never know it from these statistics. The numbers LABAs are “linked to” –even if you accept the second set of data, which has a higher average annual death toll—come to about half of the 3500 or so asthma-related fatalities in the United States each year, a number that has come way down since 2001, the year Advair was introduced. And that number is proportionately about 40 percent lower than in the United Kingdom. What we’ll probably never know is if banning LABAs outright or severely limiting their use will reduce the numbers still further or make them go up. We don’t know, for example, whether these patients were taking the medication as directed or, as frequently happens, when they were wheezing, as an alternative to albuterol. We don’t know either if these people have been diagnosed with asthma or have something else and are being treated for asthma. We don’t know if they are also severely food allergic.

We have said many times that asthma is not a disease but a syndrome—that is a set of symptoms that present themselves for a variety of reasons, some allergic and some not. That is why an asthma specialist needs an extensive tool kit–not only pharmaceutical, but behavioral, dietary and so forth. No prescription should be renewed in perpetuity without regular monitoring its effect on the disease. Advair is an important drug, and it’s not always appropriate. But asthma treatment will never be as effective as it might be—half of all cases are uncontrolled—because of the conflicting and not-always-rational priorities of the different groups involved, which might be summed up as follows:

1. Patients. If the medicine does not make me feel better it cannot be working. I will not take it.
2. Primary care physicians. No medication will work if the patient will not take it.
3. Allergists. All medication should be viewed as stop-gap temporary treatment (with immunotherapy for the long run).
4. Pharmacists. Asthma is both bronchoconstriction and inflammation of the airways. Using a LABA alone increases asthmatic deaths.
5. Researchers. Using a LABA even with an ICS when not required increases asthmatic deaths.
6. Opinion makers (sometimes known as regulators), 2010 Announcement: “FDA has determined that the benefits of LABAs in improving asthma symptoms outweigh the potential risks when used appropriately with an asthma controller medication in patients who need the addition of LABAs.”
7. Regulators (sometimes known as opinion makers)—Looking for a rigid formula to stop the use of a LABA even with an ICS when not required.

The Woody Allen rule applies in force—everything we thought was good for us turns out to be bad for us, and vice versa. The recently discovered “fact” that LABAs may increase asthma if taken over the long term, and that Beta blockers initially increase asthma but can help in the long run only add to the confusion.

Through this fog, we must not lose sight of the fact that with these drugs asthmatics are better off than in the “good old days.” A patient is more likely to take a medication that makes them feel better, and a medication must be taken to have a chance of working. A medication that only “helps in the short run” can keep you alive long enough to worry about the long run.

My own approach is to start with strong doses of medication, often including LABAs, to get asthma under control and, almost as important, make the patient feel better. By gaining the patient’s buy-in that adhering to treatment is better than the alternative, we can work towards eventual reductions in the medication level, also known as stepping down, and further control by reducing exposures to environmental triggers.

Primary care doctors may no longer be needed