I’ve been thinking lately about all the great advances in medicine over the years. There have been lots of them. And despite everything you’ve heard about looming cuts in healthcare, I have no doubt that the hits will keep on coming. Since I seem to be on this Top 5 thing lately, I figured I would continue this ride and rank my top 10 medical advances over the years. There had to be a few ground rules before putting together a list like this.

I’m a medical doctor ranking medical therapies, and so surgical advances can take up space on someone else’s server. And just to be clear, since it’s been awhile since I’ve treated malaria and cholera, I’m going to stick to Western world problems and Western world drugs.  I’m also not the young idealist I once was, so public policy initiatives, like seat belts, clean drinking water, and vaccinated babies are being tossed out with the bathwater. No, we’re talking about good old fashioned chemicals with long complicated names produced in soot belching factories and administered in our nations pharmacies and hospitals with epic markups to ensure future research funding.

So without further delay, and with no pre-authorization required, here are my top 10 medical advances.

10. Psychiatric meds. One has only to look at the CDC’s list of the top causes of mortality in America to see the logic behind this choice, as suicide rounds out the top 10 causes of death. But psychiatric problems also have a much greater impact beyond suicide. Problems like depression and anxiety often exacerbate other medical conditions, increasing the risk of complications.  They put strain on family members and cause lost productivity and income. They are one of the most common reasons for enrollment in disability.

9. Inhalers. Nothing says “thank you, doctor” like a patient who can say “thank you doctor” because they now have sufficient lung capacity to actually utter the words. From infants to nonagenarians bronchodilators of various type and brand  routinely open up peoples airways and help them stay that way. While there may not be randomized controlled trials to show this, its generally accepted as fact that people who can breathe are happier, more productive and generally healthier all around that people who can’t.

8. Oxygen. Maybe being a pulmonologist I’m a bit biased on this one. But it seems to me that oxygen as a medical therapy is, well, elemental (sorry). It’s one of the first things they slap on you when you get to a hospital, because it’s the one thing none of us can live without. Think of all the people who come into the hospital in some sort of distress; many go on to have a procedure of some kind. Many of those people would not make it to, or through, their life saving intervention without oxygen. Yes, it seems that oxygen is the one drug we’re all addicted to, and luckily, it’s free as long as you don’t want more that 21% of it. I occasionally ponder if its actually the most commonly prescribed drug in hospitals.

7. Cholesterol lowering drugs. Of the top 5 causes of death in the U.S. 2 of them involve vascular disease (heart disease and stroke), which explains the presence of this class of drugs on this list. The reduction of cholesterol by these medications (predominantly statins) has surely reduced the burden of disease caused by vascular disease

6. Blood thinners. Anticoagulants have come a long way since the days when the Wisconsin Alumni Research Foundation (WARF) funded research to determine why cows who ingested spoiled feed were dying from hemorrhage (the causative agent was named warfarin). There has been a veritable explosion of late of newer anticoagulants which now come in various forms and can be used for a variety of purposes. Treatment of everything from heart attacks to stroke prevention would not be possible without them.

5. Antihypertensives. Hypertension, like diabetes is a common contributor to vascular disease which lead to, among other things, stroke and coronary artery disease. The greater control of blood pressure by these medications has undoubtedly contributed to a reduction in morbidity. In addition, medications like angiotensin converting enzyme inhibitors and beta-blockers have other beneficial effects that go beyond their blood pressure lowering effects.

4. Birth control. In olden times in this country, and in many parts of the world today, it has been financially advantageous to have children. In an agrarian world, children contribute to labor, and tend to their parents as they age. Marriage of children could also mean merging of families and greater wealth. Nowadays, it costs close to $300,000 to raise a child. In addition, fewer children has meant more women in the job force and reduced strain on people, and marriages, which make for healthier people. Fewer children also means more resources for each child, which make for healthier children.

3. Insulin and other hypoglycemic agents. Diabetes is a major contributor to disease in the world. While it only ranks as the number 7 cause of death in the U.S. it is being increasingly understood that even minor amounts of hyperglycemia can contribute to vascular disease, particularly heart disease and stroke (which rank as the first and fourth most common causes of death). Undoubtedly without these treatments the incidence of vascular disease and infection would be astronomically higher.

2. Anesthetics and pain medication. Imagine a world in which only the most basic surgical  procedures could be performed. A world where even lancing a boil would be considered barbaric and avoided at all costs. That’s what the world was like in the dark age before anesthesia and pain medicines. So many things that we take for granted in today’s medical world, like medicines for a minor procedure or obstetrical deliveries would not be possible without anesthetic agents. And that’s before we even consider things like hip repairs, open heart surgeries, and appendectomies. No, I think I would rather not try to imagine that world.

1. Antibiotics. Ok, this was an easy one, even most kids know about the invention of the first antibiotic. I shudder to think of where we would be today without the father of modern medicine, Dr. Penicillin, whose incredible legacy is today carried on by his grandson, Dr. Vancomycin. I kid. Check out this fascinating  first-hand account of the first use of penicillin in the U.S.; a 33 year old woman at Yale, New Haven hospital. A single vial of the “black magic” was shipped from England, the physicians actually collected the patients urine to reclaim the drug and re-administer it. She lived to the age of 90. Awesome stuff.

The telephone is obsolete: How my patients contact me today 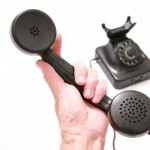