The list of things I’ve endured in the name of getting to medical school could go on, and I doubt it’s any different from my classmates’. But we’re here, finally, freshly white-coated and already racing just to stay on track.

The White Coat Ceremony was a timely, though sometimes tearful reminder of what we did to get here, why we did it, and what we’re in for as medical students and physicians. It’s worth noting, though, that it is a young part of medicine’s long history—the first ever took place in 1993. The goal was—and has been—to inject a bolus of humanism into students right as they stumble into the start of their medical training.

Most of us students have read articles and heard admonitions about how medical students’ empathy declines precipitously as they enter their third year and start seeing patients full-time. In fact, when I worked at Columbia’s Program in Narrative Medicine and founded a Working Group on Patient-Centered Medicine, empathy erosion in medical school came up about as often as what was for lunch that day—which is to say, pretty often. I even wrote my undergraduate thesis on physician-patient communication, in hopes that it would make me (and others) a more humanistic and effective clinician.

Despite all that, after reading The Soul of a Doctor (a collection of medical student essays), I feel energized but utterly unprepared to handle the constant trauma of two years on the wards while maintaining the attentiveness and empathy that each patient deserves. It’s easy to play the armchair third-year, thinking through what the students should’ve done from the comfort of a La-Z-Boy. But I worry that every student writing about their regrets from a less-than-ideal patient interaction had the same idealistic “preparation” (scare quotes intentional) that I did. I worry that when the excrement hits the fan, I too will miss an important cue, disregard a difficult patient, or cower back into my insecurities when the job demands nothing less than my whole self.

How do we inoculate ourselves against desensitization, against cynicism, and against the wretched tendency of hospital staff to refer to patients by their conditions?

Though could it be any other way? We heard speech after speech about how it’s our duty to carry ourselves professionally and ethically, and above all to “be humanistic.” But what does that actually mean? Does the act of talking about humanistic medicine make our medicine humanistic? Or is it something like the Supreme Court’s definition of pornography—“I know it when I see it”? If it’s the latter, how do we as students learn it? How do we inoculate ourselves against desensitization, against cynicism, and against the wretched tendency of hospital staff to refer to patients by their conditions?

I don’t claim to have the answer. But I have an observation: as a fledgling member of the profession, I’ve noticed medicine’s solipsism—its tendency to refer to itself as the beginning and end of all it touches. I’ve noticed language like, as physicians, it’s our duty to… [fill in the blank], the assumption being, we know what the problem is and we alone can solve it. Part of me loves “professionalism” lectures, because they remind me that I am answering a calling different in kind from pretty much anything out there—one showered with respect, privilege, and independence. But I wonder if that is the root of the problem: that in the course of medical training, despite becoming more intimate with the human body than ever before, we learn that our toil and training makes us different from our fellow humans.

In the White Coat Ceremony, just as we begin to part ways with the rest of humanity, we’re exhorted to be humanistic. And yet, every speech we heard, every book and essay we read, came not from a patient but from a medical professional. Indeed, we are entering the medical profession. But in such a noble profession, one that emphasizes lifelong learning and service to others, is there a place for learning from those whom we serve? Before long I’ll be able to see an entire world inside a patient’s eyes–but I wonder when I’ll learn how the world looks from behind their eyes.

What health care can learn from the military 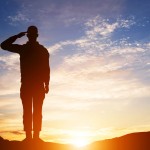 In medicine, is there a place for learning from those we serve?
6 comments