So begins a story called A Tale of Two Cities by Charles Dickens. Its about the differing responses of two different nations to the revolutionary events and social upheaval of 1775. I’m going to tell a tale of three hospitals. You’ll see why soon.

Today, in 2012, health care systems around the world, including the United States, are launching paradoxical, sometimes desperate, attempts to remain profitable and socially relevant to their patients.

The first hospital in my story is located in Valencia, Spain and is called Marina Salud Hospital de Dénia.

“Hospital de Denia is a rare example of a 100 percent paperless hospital and is a role model for what the hospital of the future should look like,” said Uwe Buddrus, CEO, Health Information Management Systems Society (HiMSS) Analytics Europe on May 7th, 2012.

Hospital de Denia enjoys the distinction of being the first HiMSS Stage 7 hospital in Spain and the second in Europe. HiMSS rates hospitals around the world, including the United States.

Hospitals that posses “interoperability” are expected to enable doctors and hospital administrators to improve the overall health of their local populations through innovative delivery techniques such as risk screening for people at risk for heart attacks and strokes. 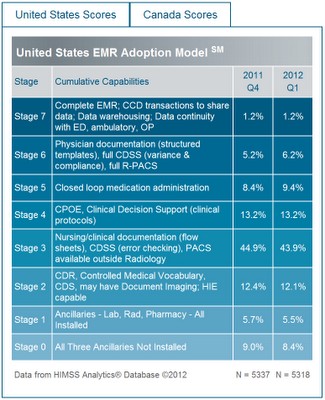 Doctors can use the hospital database to reach out to “at-risk” individuals who, for example, may have missed their flu shot.

These interventions are only some of the most obvious tools the new electronic hospital will bring to a reformed health system that should produce better health outcomes at lower average costs going forward.

These innovative delivery techniques will be essential to financial success under Medicare Accountable Care Organizations (ACO) who will mandate measurement of population health outcomes.

The second hospital in my story is in Lakewood Ranch, Florida – a tony subdivision near Sarasota, Florida whose main distinction is the high net worth of its local inhabitants. Lakewood Ranch Regional Medical Center opened about 5 years ago despite the fact that at least three other major hospitals already served that area.

Smaller, non-teaching hospitals, like Lakewood Ranch, struggle with EMR adoption and the costs involved in achieving “interoperability”, according to this April 2012 Health Affairs article.

The third hospital in my story is about one mile from my house here in Spain. It’s a 1,645 bed super-hospital that has been under construction for two years and is expected to open in 2014. Like Spain’s first HiMSS Stage 7 hospital in Valencia, is expected to be fully interoperable when it opens in two years.

Why one-third of hospitals will close by 2020 is the top post on KevinMD.com. 327 people have weighed in with their comments on whether or not David Houle and Jonathan Fleece’s hypothesis is correct.

It is the best of times to be a patient in one of these interconnected, interoperable super-hospitals.

However, it may be the worst of times to be the owner or the administrator of an unconnected hospital or private medical clinic in America’s reforming health care system.

Tim Richardson is a physical therapist who blogs at Physical Therapy Diagnosis.  He is the author of Bulletproof Expert Systems: Clinical Decision Support for Physical Therapists in the Outpatient Setting.