This example of a disaster waiting to happen, in the form of an error-promoting CPOE, is a poster example of why the net of litigation needs to be cast far wider than just clinicians when EHR-related errors result in injury or death.

This order entry screen, from a production system shows the following.  In all fairness, I do note it’s unclear if the vendor or the customer’s configuration “experts” were responsible for this: 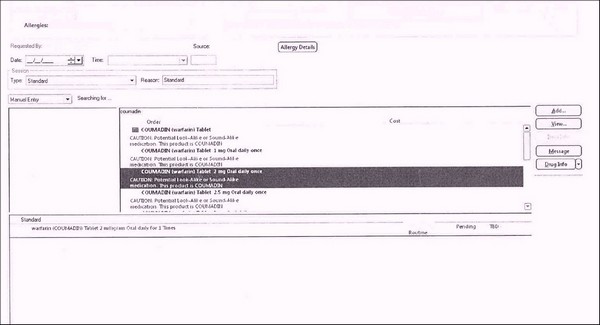 Below and not indented as is the selection, where the clinician is liable not to look very carefully, is the helpful interpretation:  “warfarin (COUMADIN) Tablet 2 milligram Oral daily for 1 Times.”

This drug needs to be given daily, generally for a very long term.  Its effect on blood clotting varies for numerous reasons in an individual over time, and needs to be checked frequently via a blood test (International Normalized Ratio or INR) to ensure the level of effect is neither too little (which could result in clots) or too much (which could result in serious or fatal bleeding).

In this case, the clinician wanted Coumadin to be administered “daily,” as in “each and every day,” but this was the default – daily, but only once.  “Oral daily for 1 Times.”

Daily Coumadin (i.e., daily EVERY DAY), the clinician related, could be ordered only with “painstaking difficulty.”

“X mg Oral daily once” is an unimaginably absurd and bizarre dosing selection to have on a CPOE system for such a critical drug – or any drug.  “Daily – once?”

It should not, and does not, take a rocket scientist to realize this selection could quite easily lull the busy clinician into believing they have selected a dose to be continued every day – i.e., “once daily” – as per the standard usage of this drug.

To order this drug for (true) daily administration, a user must find a “repeat” icon and click the number of days the drug is to be administered.  The “repeat” icon is not readily apparent amidst screen clutter.

For other drugs, the order choices are “## mg oral daily” or similar.

This semantic and human-computer interaction ineptitude is truly a disaster waiting to happen, especially with the medical/nursing/trainee staff turnaround that goes on in hospitals, and with the reality that clinicians are working at various hospitals with different CPOE/EHR systems.

Is this some sort scheme to prevent endless-administration Coumadin errors when the drug is actually deliberately discontinued, I ask?  If so, it’s ill-conceived and dangerous at best.

By way of further information, this drug is a common anticoagulant whose use is often protective of injurious or fatal blood clots that can cause strokes or death in people with common conditions such as atrial fibrillation or prosthetic heart valves:

Warfarin is used to decrease the tendency for thrombosis or as secondary prophylaxis (prevention of further episodes) in those individuals that have already formed a blood clot (thrombus). Warfarin treatment can help prevent formation of future blood clots and help reduce the risk of embolism (migration of a thrombus to a spot where it blocks blood supply to a vital organ).

The type of anticoagulation (clot formation inhibition) for which warfarin is best suited, is that in areas of slowly-running blood, such as in veins and the pooled blood behind artificial and natural valves, and pooled in dysfunctional cardiac atria. Thus, common clinical indications for warfarin use are atrial fibrillation, the presence of artificial heart valves, deep venous thrombosis, and pulmonary embolism (where the embolized clots first form in veins).

This is an example of the kinds of mission hostility that results when amateurs attempt to play doctor.

I add that this type of “errorgenicity” is inexcusable.  If patients suffer harm from this type of “feature,” the net of liability needs to go further than just the clinician who was caught in a web of cybernetic clinical toxicity.

Scot Silverstein is a physician and medical informatics professional who blogs at Health Care Renewal.

The malpractice risk of volunteer medical coverage at sporting events