In our rush to establish a national electronic medical record (EMR) system as part of the American Recovery and Reinvestment Act of 2009, powerful silos of independent EMR systems have sprung up nationwide.  While most systems are being developed responsibly, like the Wild, Wild West, many have been developed without an objective eye toward quality and the potential  harm they may be causing our patients.

As most readers of this blog are aware, since 2005 the medical device industry in which I work has had widely publicized instances of patient deaths splashed all over the New York Times and other mainstream media outlets from defibrillator malfunctions that resulted in a just a few patient deaths.  The backlash in response to these deaths was significant: device registries were developed, software improvements to devices created, and billions of dollars in legal fees and damages paid to patients and their families on the path to improvement.  In addition, we also learned about the limits of corporate responsibility for these deaths thanks to legal precedent established by the Reigel vs. Medtronic case.

This week I received a medical record from a large academic medical center somewhere in the United States (the details are unimportant) that has one of these new pioneering EMR systems manufactured by $13 billion-dollar company, Cerner Corporation.  Now before I go on a rant about Cerner’s EMR system, I should preface my remarks to say that I have never personally used Cerner’s system.  But I am a doctor who received a note composed on Cerner’s system and what I saw was one of the better examples of how EMR’s are contributing to misinformation and confusion when health care is delivered.

I received a copy of an internal medicine consult that was performed on a patient at this outside hospital.  I have extracted the “medications” portion of the internist’s note exactly as it was displayed in the note below (although the list extended over more than one page, so I joined the list together as one figure). Needless to say, I was terrified at what the system had listed as the patient’s medications: 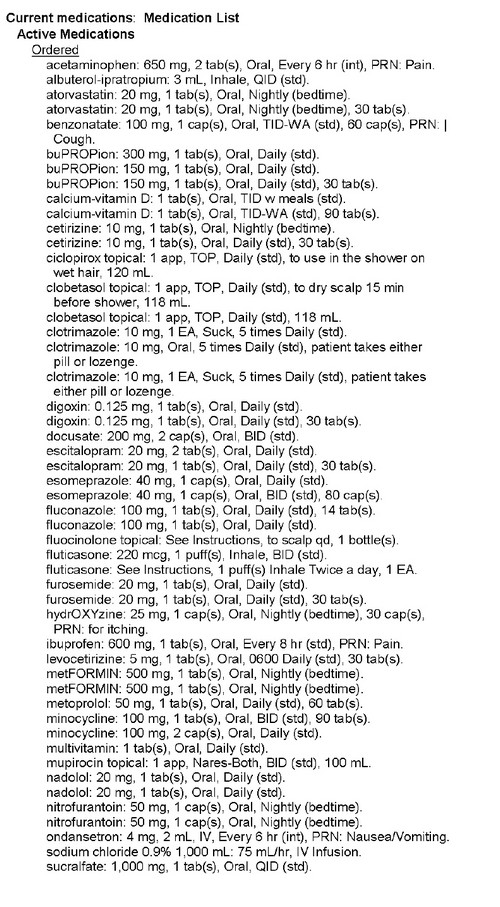 In this example, we see multitudes of medications listed more than once.  We see drugs of similar classes (antihistamines, beta blockers) on the same list.  We see warfarin, one of our most dangerous drugs dispensed, without a dose included.  We see what seems to be outpatient meds listed with inpatient meds, I’m not sure.  Honestly, we really have no idea what medications are actually being taken from this list.  And yet this list of medications is listed by the EMR as the patient’s “Active Medications.”

What the heck have we created?

Certainly, any capable physician who cares for patients would describe this medication list as worthless.  So why is it in there?  (Don’t get me wrong, the fact that any doctor would allow such crap to be displayed in his or her medical note by using an EMR shortcut to enter them uncorrected is beyond me.  Certainly, we as doctors must accept a big portion of the responsibility for this).

But when EMR developers and their hospital administration customers purchase software capable of spewing forth completely useless AND potentially lethal information about our patients that is then transmitted far and wide, (not to mention to local direct caregivers) doctors have an obligation to speak up.

These kinds of documentation problems are the EMR’s Achilles’ heel.  But beyond this, EMR software updates are routinely deployed without real-world real-life testing.  Ever.  And yet, like patients with a defibrillator who die outside the hospital before a root cause of a defibrillator defect can be discovered, I acknowledge that it is  incredibly difficult to prove that the death of an individual was caused by an EMR software problem.

And yet, we must.

So how will we measure problems with EMRs?  It seems industry representatives would rather not address these concerns.  We should ask ourselves, is anyone thinking about this?

Right now, the prevailing belief is that the electronic medical record might be one of the most important medical devices doctors have at our disposal to care for patients.  I tend to agree.  But it’s potential to do harm is also enormous if it is not used responsibly and accurately.  After all, as the above example shows, the potential to introduce unintended yet potentially lethal errors into patient care is huge.  More importantly, since nearly every person in the United States will soon have their medical data housed within these systems, the number of people that could be adversely affected by these systems is much larger than what we’ve seen with our recent defibrillator malfunctions.

Perhaps, like the ICD registry, we should try to to develop an EMR registry of adverse patient outcomes caused by these software systems.  That way, every independent EMR company can learn from the other’s mistakes.  Because, guess what …

… like other man-made medical devices, EMR’s are not perfect either.

Is managed care worth the price of a life?