The glittering commercialism and noisy cheer of the holiday season can be stressful for any of us.  But for the parent who’s lost a child during the past year, facing the first Thanksgiving and Christmas with an empty place at the table can make already unbearable grief so much worse.

No one in modern America expects a child to die.  Children only die in nineteenth century novels and third-world countries, or so we’d like to think.  Yet accidents, sudden infant death syndrome (SIDS), and cancer, among other causes, claim the lives of thousands of American infants and children each year.  Their parents become unwilling members of a club you never want to join—parents who know what it’s like to stand at your own child’s graveside.

If it makes you horribly uncomfortable to consider that thought even for a moment, that’s good.  Otherwise, you can’t relate to a patient or a friend whose child has died.  No matter what your specialty is, eventually you will encounter bereaved parents.  Medical education outside the field of psychiatry gives us little help in knowing what’s helpful to these families and what isn’t, especially during the emotionally charged holiday season.

I can speak to this subject as a mother and a physician because my baby Alexandra died when she was five months and sixteen days old.  It was a long time ago, but here is the first piece of advice I can give to anyone: understand that the pain of losing a child never disappears.   Many people think that any parent—a patient, co-worker, or friend—should be “over it” in six months or so.  I wish that were true.

The emotions of recently bereaved parents are terribly raw, and it can be tough for them to cope in social situations during the holidays where tears would be out of place.  They may not want to burden other relatives and friends by talking much about their grief.  A support group can be of great help as a place where they can talk freely and feel less isolated.  In the support group I went to, there was a surprising amount of laughter though much of it was black humor.  I couldn’t wait to tell the group about the colleague who cornered me at work, declaring that she understood exactly how I felt because of the deep grief she endured after a breakup with her college boyfriend.

If you refer a patient to a support group, make sure in advance that the composition of the group is suitable.  An infant loss support group that consists mostly of women who have suffered early miscarriages will probably not be much comfort to a couple who has lost an infant to stillbirth or SIDS.  Parents who have lost an adolescent child to suicide or drug overdose have different needs than a family whose child died of cancer.

Symptoms such as appetite disturbance, sleep disorders, lack of energy, and fearfulness can be well within the normal spectrum for many bereaved parents, especially during the first year or two.  Patients may present with digestive dysfunction or secondary infertility.  As an anesthesiologist, I’ve met patients before surgery who seemed hostile, difficult, or unusually anxious; the underlying reason turned out to be that they had suffered a recent death in the family.  It’s helped for me to tell them a little of my experience that sorrow lightens over time, though almost imperceptibly at first.

If a parent is unable to return to a normal level of function, and especially if care of other children in the family is compromised, referral for psychiatric evaluation is mandatory.  It can be tempting to try an antidepressant first, especially when there is a long-standing relationship between the patient and a primary care physician or obstetrician.  But for young parents, the sexual side effects of serotonin reuptake inhibitors can be distressing, and could interfere with success in conceiving again.  The wrong medication choice could delay a return to normal sleeping patterns, and in rare cases increase the likelihood of a suicide attempt.

It’s hard to advise any grieving parent about how to approach the first holiday season after their loss.  In the best-case scenario, other relatives are understanding and supportive, and can host the holiday gathering at another home.  If there are other children in the family, this may be the best way to allow them to celebrate the holiday without guilt and give the parents some respite.

For other parents, it may be helpful to do something that is completely different from their traditional holiday routine, acknowledging that this first year is going to be painful and difficult no matter how they choose to manage it.  Volunteering at a local shelter and helping to serve Thanksgiving or Christmas dinner may be a meaningful option for families with older children.

I still remember our first Christmas without Alex, who would have been fifteen months old.  We decided to leave our home in North Carolina and visit relatives in Los Angeles.  I was seven months pregnant. To say that I was in emotional turmoil most of the time would be an understatement, and the boxy hotel room with its small artificial Christmas tree didn’t help.

But the hotel had an outdoor pool that was heated year round, and on Christmas Eve, though the night was chilly, we went swimming.  As I floated in the warm water, looking up at the stars in the night sky and feeling weightless for the first time in weeks, I remember a flash of hopefulness.  That was the first moment I believed that the holidays might be better someday, and in time it proved to be true.

Living with chronic illness during the holiday season

I will never be the physician that my father was 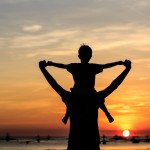