Physicians are not trained to interpret paintings, and most patients do not have a lifetime of artwork to analyze. However, a rare opportunity for both to occur is at the Museum of Modern Art’s exhibition de Kooning: A Retrospective.

Wilem de Kooning, regarded as one of the most prolific American artists of the twentieth century, grounded himself in the Abstract Expression movement. The AbEx movement is widely associated and recognized with the drip paintings of Jackson Pollock, but it is de Kooning who is the star of this show. The exhibit occupying MoMA’s sixth floor spans de Kooning’s nearly forty years of painting.

In the 1980’s, de Kooning was diagnosed with Alzheimer’s disease, and his painting career ceased by the end of the decade. He passed away in 1997. Strolling through the exhibit largely plays as a visual timeline of de Kooning’s life as he constantly develops and redefines his style. Large canvas are around every corner and line each wall. Notable paintings include “Excavation” and “Woman V,” both considered among his most ambitious and greatest pieces. 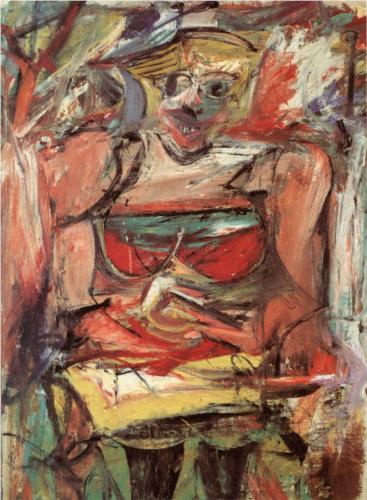 Vast canvas of color will mesmerize and challenge any viewer to imagine de Kooning’s thought process. Luckily, the curator assists with biographical placards for significant milestones in de Kooning’s career.

As the exhibit dwindles down, de Kooning’s last works will almost bring tears to your eyes. Canvases which would normally be full of color are muffled and sparse. Large areas of white paint allude to the amyloid plaque of the Alzheimer’s slowly breaking up de Kooning’s mind. While many of the latter paintings remain untitled, whether purposefully or unfinished, one painting strikes the viewer as de Koonings “last hurrah,” but I will not ruin the surprise.

Not every patient has a comprehensive body of artwork to analyze and relate to their illness, but that makes the rare occasions in which those patients come along quite special.

Michael Chorney is a medical student who blogs at The Human Fabric.

The therapeutic value of touch in medicine

The art of Alzheimer’s disease
3 comments