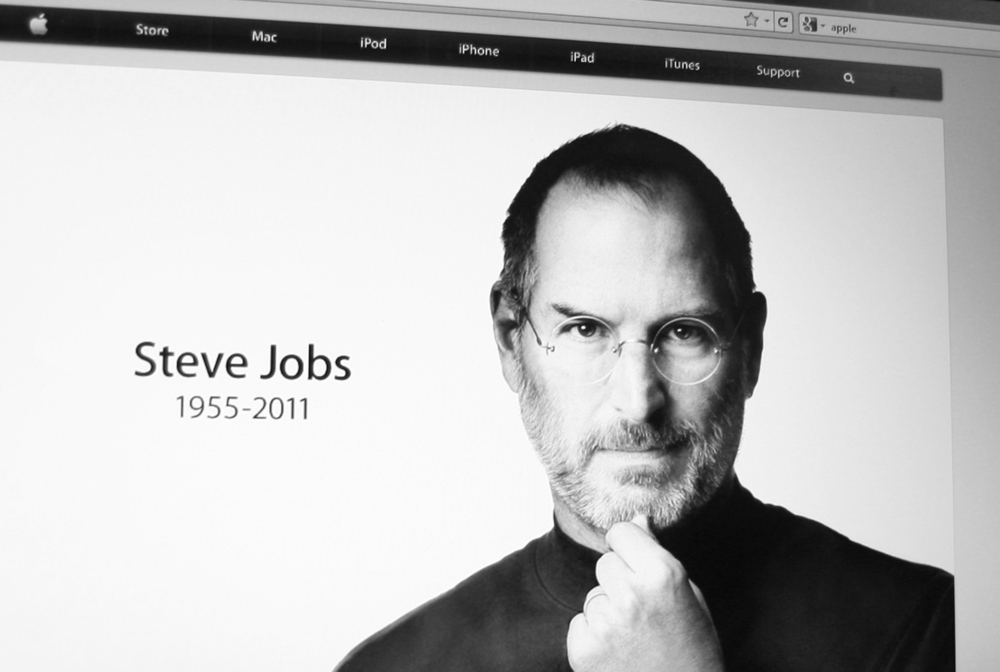 I’ve been reading A Game Plan for Life: The Power of Mentoring written by famed UCLA basketball coach John Wooden.  Wooden spends half of his book thanking the people who had a powerful influence on his life, coaching, philosophy, and outlook on life.  Important people included his father, coaches, President Abraham Lincoln, and Mother Theresa.

Though clearly he could have never met the former and didn’t have the opportunity to meet the latter, Wooden correctly points out that as individuals we can be mentored by the writings, words, and thoughts of people we have never and will likely never meet.

Which seems like the most opportune time to thank one of my mentors, founder, and former CEO of Apple, Steve Jobs.

Now, I have never met nor will I ever meet Steve Jobs.  Lest you think I’m a devoted Apple fan, I never bought anything from Apple until the spring of 2010.  Their products though beautifully designed were always too expensive.  I’m just a little too frugal.  I know technology well enough that people mistaken me for actually knowing what to do when a computer freezes or crashes.  Yet, the value proposition was never compelling enough until the release of the first generation iPad.  Then the iPhone 4.  Finally the Macbook Air last Christmas.

No, thanking Steve Jobs isn’t about the amazing magical products that have changed my life as well as millions of others.  It’s more than that.  What he has mentored me on is vision, perspective, persistence, and leadership.  Nowhere is this more important than the world I operate in, the world of medicine.  Increasingly health care is fragmented, confusing, and frustrating for patients.  As Dr. Atul Gawande noted in his commencement to Harvard Medical School:

Everyone has just a piece of patient care. We’re all specialists now—even primary-care doctors. A structure that prioritizes the independence of all those specialists will have enormous difficulty achieving great care.

We don’t have to look far for evidence. Two million patients pick up infections in American hospitals, most because someone didn’t follow basic antiseptic precautions. Forty per cent of coronary-disease patients and sixty per cent of asthma patients receive incomplete or inappropriate care. And half of major surgical complications are avoidable with existing knowledge. It’s like no one’s in charge—because no one is. The public’s experience is that we have amazing clinicians and technologies but little consistent sense that they come together to provide an actual system of care, from start to finish, for people.

We don’t have an actual system of care.  A majority of doctors still use paper charts and prescription pads that can be difficult to access or decipher (doctors have poor penmanship?) and communicate with colleagues via letters, faxes, and phone calls.  In an industry that is information driven, this seems too antiquated to be true.  Hospitals each have their own unique system of care, and there is little standardization which means both patients and doctors need to learn new rules with each new hospital.  Patients cannot invest in long-term relationships with their doctors because they change jobs, their company or their doctors dropped their previous insurance plan.

What we have is a potpourri of doctors, hospitals, pharmacies, and health insurers cobbled together to form a “health care system”.  For a patient, the number of combinations is staggering.  Each experience varies depending on who they see, what insurance coverage they have and the type of (or lack of) information technology their doctors have.  Many doctors today still bristle at the possibility that they actually need to email their patients and, as a result, don’t offer that as a way of communication or education.

In the end, what patients and doctors really want sits at the intersection of humanity and technology.  Patients want doctors who know them as individuals, use medical technology thoughtfully, and a system that is highly reliable, safe, and focused on them to stay well or get them better.  Doctors want patients who are partners in their care, technology that enables them to get the accurate information they need real-time, and a system that is streamlined to allow doctors to be healers.

In other words, we need a better health care system for both parties.

As a practicing primary care doctor, his words inspire me to help work towards creating a system which “simply works” for both doctors and patients.  Some of the most important quotes that have shaped my thinking include:

“Innovation has nothing to do with how many R&D dollars you have. When Apple came up with the Mac, IBM was spending at least 100 times more on R&D. It’s not about money. It’s about the people you have, how you’re led, and how much you get it.” — Fortune, Nov. 9, 1998

“It’s really hard to design products by focus groups. A lot of times, people don’t know what they want until you show it to them.” — BusinessWeek, May 25, 1998

“Do you want to spend the rest of your life selling sugared water or do you want a chance to change the world?”
— The line he used to lure John Sculley as Apple’s CEO, according to Odyssey: Pepsi to Apple, by John Sculley and John Byrne

“So you can’t go out and ask people, you know, what the next big [thing.] There’s a great quote by Henry Ford, right? He said, ‘If I’d have asked my customers what they wanted, they would have told me “A faster horse.” ‘ ” — CNN / Money

“My job is to not be easy on people. My job is to make them better. My job is to pull things together from different parts of the company and clear the ways and get the resources for the key projects. And to take these great people we have and to push them and make them even better, coming up with more aggressive visions of how it could be.” — CNN / Money

“Your time is limited, so don’t waste it living someone else’s life. Don’t be trapped by dogma — which is living with the results of other people’s thinking. Don’t let the noise of others’ opinions drown out your own inner voice. And most important, have the courage to follow your heart and intuition. They somehow already know what you truly want to become. Everything else is secondary.” — Stanford 2005 commencement address

Many of my blog posts have reflected on whether health care can indeed be better than it currently exists much the same way Jobs has redefined how we as a society communicate, relate, receive, and create content.

Does America Want Apple or Android for Health Care?

I as a doctor I’m incredibly sorry that medicine has not yet evolved to the point that a cure exists for the rare type of cancer Jobs.  I’m sorry that he is so ill at an incredibly young age, in his mid-50s, when many people begin to contribute even more to society with all of the knowledge and experience they’ve acquired.  The future might be a little less bright without Jobs leading his team at Apple on creating products and experiences none of us truly knew existed until he showed them to us.

And yet, I wanted to thank him for his mentoring.  Clearly though the outpouring of comments and support across the web, Steve Jobs has had a profound influence in many of our lives.  In most cases, it wasn’t even about the products.

It was simply a way of living and viewing life.

My thoughts are with him, his family, and the people at Apple who continue to innovate and challenge themselves so the rest of us benefit.

Healthcare professionals need to get an annual flu shot