Patricia Daly, FACP, of Warren Memorial Hospital in Front Royal, Va., told us about the case of a 49-year-old man who presented with marked weight loss. A year prior, the patient had weighed about 220 pounds and intentionally put himself on a diet, but after losing 45 pounds, he developed poor appetite and early satiety.

He continued to lose weight to a nadir of 143 pounds. He found it increasingly difficult to think and work, causing him to lose his job. He reported fatigue and spent most of the day in bed, taking frequent naps. At that point, his wife took him to the hospital emergency department. He was examined there and did not appear acutely ill, so an outpatient evaluation was arranged. 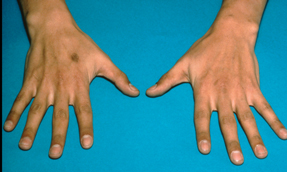 Initial laboratory tests were unrevealing. A head CT scan showed chronic sinusitis. He was evaluated by an ear, nose and throat surgeon and underwent sinus surgery. He was referred to a gastroenterologist and had upper endoscopy and colonoscopy. Helicobacter pylori was found and he was treated with a course of antibiotics. His early satiety resolved, but he did not gain weight. The patient was also referred to a psychiatrist who diagnosed depression related to the recent death of his mother. He was started on olanzapine and sertraline. His wife reported that this treatment resulted in some improvement in his cognition, and he gained about 10 pounds.

The patient’s sister worked as an X-ray technologist and was cared for by Dr. Daly for her Hashimoto’s thyroiditis and hypothyroidism. She remained very concerned about her brother, although he had improved somewhat, and wondered if his symptoms might be related to his thyroid. She asked if Dr. Daly would see him in consultation.

The patient had a history of hypothyroidism and had been taking levothyroxine since age 15. His father and his sister also had hypothyroidism. His mother had recently died of multiple myeloma.

He was married with five children and had worked in sales until his recent job loss. He found a new job but quickly lost this one too because, he told Dr. Daly, “I couldn’t think clearly enough to do my work.” He did not smoke or drink alcohol.

Dr. Daly noted on physical exam that he appeared well. His pulse was 78 beats/min, his blood pressure was 90/72 mm Hg, his weight was 157 pounds and his height was 66.5 inches. His body mass index was normal at 24.5 kg/m2. There was no proptosis, stare or lid lag or periorbital edema. Extraocular movements were full.

He appeared quite tan, but it was the end of the summer and the patient stated emphatically that his skin color had not changed and that he had always been darkly pigmented, as was one of his sisters. Dr. Daly noted some subtle hyperpigmentation on his buccal mucosa but no hyperpigmentation in his palmar creases or on his extensor surfaces.

The thyroid was slightly firm but not enlarged, and no nodules were appreciated. On neurological examination, the patient was alert and appropriate in affect, his gait and speech were normal, there was no tremor of his outstretched hands, and his reflexes were symmetrical with normal relaxation phase; there was very slight proximal weakness in his upper extremities, but strength was normal in his lower extremities.

Dr. Daly told us that she reviewed the patient’s prior laboratory testing. In the emergency department more than six months previously, his thyroid-stimulating hormone (TSH) level was elevated at 20 mIU/L However, on two subsequent occasions, his internist tested his thyroid function and it was normal, with TSH levels in the 2 to 3 range with a normal free T4. “I told him that I did not think his symptoms were related to his thyroid,” Dr. Daly recounted.

“As an endocrinologist, I immediately thought about Addison’s disease, although his case was not typical,” Dr. Daly said. “I did not want to jump the gun with this patient for an answer, especially with his normal electrolytes.”

She brought him back the next morning for a cosyntropin (ACTH) stimulation test. His baseline cortisol was less than 0.4 mcg/dL and remained undetectable 30 and 60 minutes after a cosyntropin injection. Subsequently, his basal ACTH level returned markedly elevated at 1,232 pg/mL (reference range, 10 to 60 pg/mL), confirming a diagnosis of primary adrenal insufficiency or Addison’s disease.

Dr. Daly treated the patient with oral glucocorticoids, and over the next four weeks, he demonstrated marked improvement in his cognition and gained 12 pounds. When she saw him in follow-up, his blood pressure had increased to 108/80 mm Hg, his skin was lighter and there was a marked change in his personality. Dr. Daly told us that on her initial exam, he appeared very passive and spoke slowly. After glucocorticoid replacement, he was confident, gregarious and outgoing.

After treatment, the patient’s wife wrote a letter to Dr. Daly, thanking her for “giving me my husband back.”

This was a particularly difficult case to diagnose: a rare disorder with vague symptoms. But more than that, the findings were not classical. Specifically, the patient appeared well, his electrolytes were normal, and he denied any change in skin pigmentation. Further, he had improved with prior interventions, including treatment of H. pylori and antidepressant therapy, and he had undergone sinus surgery without complications.

As physicians, we are all taught to recognize disorders based on the classical case, the so-called “prototype.” It is more difficult to recognize the atypical case. Failure to do so is termed a “representativeness error” by cognitive psychologists.

Dr. Daly told us she thought immediately of Addison’s disease in this case. One could say that, as an endocrinologist, she was primed to make this diagnosis. The phenomenon of “priming” has been well studied in cognitive psychology. Priming is the unconscious memory effect in which exposure to a stimulus influences the response to a later stimulus. In associative priming, an initial word (the prime) brings to mind another word that is associated with it.

In this case, the word “hyperpigmentation” acts as a prime, calling to mind the name of a particular diagnosis. But which diagnosis depends on a physician’s training and the kind of patients he or she sees. The treating gastroenterologist in this case also noted the patient’s dark skin and ordered tests for hemochromatosis, which proved to be negative. For Dr. Daly, the term “hyperpigmentation” immediately brought to mind the diagnosis of adrenal insufficiency. The association of Hashimoto’s thyroiditis with autoimmune adrenal insufficiency was a second prime, helping her to overcome the atypical presentation in this case and avoid a representativeness error.

This patient may well not have had adrenal insufficiency. Depression and H. pylori infection might have accounted for his symptoms. But once a physician considers a rare illness or an atypical presentation, the decision to pursue it depends in part on the seriousness of missing the diagnosis. In this case, recognition of the correct diagnosis not only resulted in dramatic improvement of the patient’s symptoms, but also averted the possible severe consequences of untreated adrenal insufficiency. It is here that the physician must exercise clinical judgment.

Jerome Groopman, a hematologist-oncologist and endocrinologist, and Pamela Hartzband are staff physicians at Boston’s Beth Israel Deaconess Medical Center. They are authors of Your Medical Mind: How to Decide What Is Right for You. This article was originally published in ACP Internist.

10 reasons why you need to change doctors

I concentrated to distill all that I had learned about death

The decision to pursue a rare illness
3 comments