It seems as if teenage student athletes have been dying by the month in often spectacular and dramatic fashion.  Last September Texas high school senior Reggie Garrett died suddenly just after throwing a touchdown pass .  Last week a 16-year-old Michigan basketball player died dramatically just after becoming a hero by scoring the winning basket to preserve an undefeated season.  Then just a week later another 16 year old from south Texas died during a basketball tournament in Austin. Additionally, an Oregon high school football player collapsed while playing and required CPR to save his life last September and in January a high school basketball player from Minnesota when into cardiac arrest during a game and required electrical defibrillation to save his life.

Some have been calling for increased medical screening of student athletes but there is conflicting data that  pre-screening by EKG actually saves lives by weeding out those with high risk pre-existing conditions. One study from Israel looked at the rates of sudden cardiac death among student athletes before and after 1997 when screening by EKG became mandatory and found no differences. However, a 2010  Italian study found that EKG screening helped to reduce the rates of sudden cardiac death up to 89%.  The differences between studies are likely the result of the different genetics of the study populations (which tend to be homogenous) and the incidences of congenital cardiac disease among these test populations.  Structural abnormalities in the heart present from birth are responsible for the vast majority of sudden cardiac deaths in young athletes.

Not only is pre-screening by EKG of questionable effectiveness but it is likely to be prohibitively expensive for large populations. The Italian study found that even at a reasonable cost of $40 per  EKG, over 33,000 student athletes needed to be screened in order to prevent one death. Thus the total cost was $1.32 million per life saved. And this does not include the costs of additional advanced testing that must be done for each abnormal EKG. Electrocardiography is sensitive but not very specific. This means that there are going to be a significant number of false positives (up to 40%) that need to be evaluated with advanced testing at a cost of several hundred to several thousand per case. You do the math. $1.32 million could quickly become $20 or $50 million and is way out of the financial capacity of most public school districts.

The problem is a common one in preventative medicine. A screening test should be safe, cheap, and effective (i.e. sensitive) but also should have a relatively low rate of false positives (specificity) that lead to more expensive testing thus negating the cost effectiveness of such testing. Additionally, the population to be screened should have a relatively high rate of the disease to be screened for so as to maximize effectiveness. Ergo, cancer screening exams are done in older populations who have much higher rates of cancer. Yet, the incidence of high risk cardiac conditions for student athletes is very low. The most common condition responsible for 36 to 44% of all sudden cardiac deaths in young athletes, hypertropic cardiomyopathy, occurs in only 0.05-0.2% of the general population.

And there are few reliable variables in the patient’s history or physical that would  help to narrow down who should get an EKG or further testing.  Obviously a history of sudden cardiac death with successful resuscitation or other history of chest pain, excessive shortness of breath with exertion, or syncope (collapse or fainting) would help screen patients but the fact is that the vast majority of at-risk athletes have no obvious signs or symptoms or identifiable risk factors until they die suddenly. A 1996 study of 215,413 marathon runners over 19 years found that none of the patients who died of sudden cardiac death had a known history of heart problems or prior symptoms and half had participated in multiple marathons without any problems. That’s the bad news.

The good news is that despite all of the intense media attention, sudden cardiac death among student athletes is an extraordinarily rare event with rates of 1 per 50,000 to 1 per 300,000.  Compared to this, the rates of death from all causes for teenagers 12-19 years old is 1 in 2,000 (according to 1999-2006 CDC data).  And student athletes don’t appear to be more likely to die from cardiac causes than their more  sedentary classmates. The same CDC data found that 3% of all deaths in this age group were from cardiac causes which extrapolates to about 1.5 deaths per 100,000 and this is the same rate as the student athlete group. 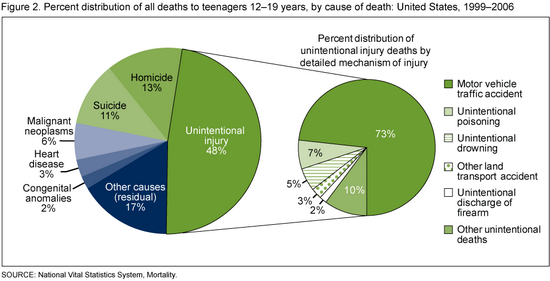 Rather then screening a large heterogeneous group for rare cardiac disease to prevent an even rarer case of sudden cardiac death at a potential cost of millions, a better strategy is for any school district or university to invest a few thousand dollars in one or more portable emergency cardiac defibrillators to be available at sporting events and event venues. The majority of sudden cardiac death in student athletes is thought to be from a sudden ventricular arrhythmia due to an underlying predisposition and the best treatment by far is the delivery of electrical cardioversion of the potentially fatal heart rhythm.

Slipping through the cracks in our health care system

Should teenagers be screened to prevent sudden cardiac death?
3 comments