We have known for quite some time now that the patient’s environment in a hospital matters to his/her outcomes. The concept of biophilia was applied by Roger Ulrich back in the 1980s to surgical patients in a series of experiments. Famously, this work showed that looking out your hospital room’s window on a bunch trees is associated with better and less eventful post-operative recovery than staring at a brick wall, for example. We have also known for some time that some of the hospital-associated delirium can be mitigated by having the patient dwell in a room with a window and be exposed to the diurnal light changes.

Another, perhaps even more tangible outcome that can be modified by hospital design is the spread of hospital-acquired infections. Recently a paper in the Archives of Internal Medicine from the group in Quebec, who brought us detailed reports of the devastating multihospital hypervirulent Clostridium difficile outbreak in the last decade, generally confirms the effectiveness of private ICU rooms in containing the spread of HAIs. There are some interesting details to point out.

For example, the intervention hospital appears to have had a higher proportion of medical patients than the control institution. Why is this important? Well, medical patients generally experience more chronic and therefore longer stays in the ICU. This gives them a greater opportunity for exposure to HAIs than their surgical counterparts. On the other hand, we know that VAP, for example, an infection very likely to be caused by one of the resistant organisms listed in Table 2 of the paper, happens much more frequently in trauma ICUs than medical ICUs.

Second, the unadjusted ICU length of stay shows some interesting results, depicted in the graph below: 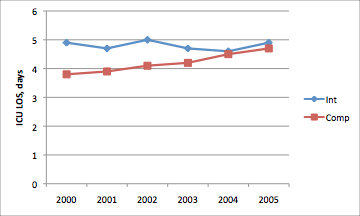 So, while at the intervention hospital the raw ICU LOS has remained stable, at the comparator institution it has been slowly creeping up. Of course, the investigators adjusted for all kinds of factors that may influence this outcome, and showed that there may be a (marginal) reduction in the ICU LOS in association with the switch to private rooms. The authors note that the adjusted average ICU LOS fell by 10%, though under similar circumstances in other similar investigations there is a 95% chance that this would fall somewhere between 0% and 19% reduction. So, under the best of circumstances, if we get a 20% reduction in the 5-day ICU LOS, this translates to about 1 day. And given that transfer timing is more likely to be driven by the availability of ward beds than by the patient’s clinical readiness, I question whether this is truly a staggering reduction. Additionally, if you read on, you will realize that there is very little reason to believe that this maximal reduction in ICU LOS is unlikely to be achieved by an average institution. In fact, even the 10% seen on average in this investigation may be a bar that is too high in other less well organized ICUs.

It is important to remember a couple of things: 1). In some circumstances there is unlikely to be any reduction in the ICU LOS; 2). Since LOS is not a normally distributed function, the mean value underestimates the true measure of central tendency in this outcome (this is due to the typically long right tail present in this distribution); and 3). This investigation, though not strictly speaking experimental, was done at 2 academic institutions with highly organized infrastructure and what looks like closed model ICUs (a dedicated specialized team of critical care professionals caring for all ICU patients). For this reason, a similar intervention at a less stringently streamlined institution is unlikely to produce the same magnitude of results.

But the mere fact that the rates of exogenous transmission of pathogenic organisms were reduced is itself encouraging. At the same time, by focusing on carriage rates and not just clinical infections, the authors may be overstating the clinical significance of the observed reduction. Additionally, one of the issues that does not appear to have been addressed explicitly has to do with the availability of sinks: In the intervention unit there was a plethora of sinks, missing in the pre- period and also not available in the comparator hospital. Is it possible then that simply putting in more sinks would accomplish the same for a lot less money?

And this brings me to my next issue with the paper — cost effectiveness. Now, according to the AHA annual survey of US hospitals, the average age of the physical plant is on the order of 10 years. Given the rapid pace of change in medicine, this may well signal a time for capital investments in plant improvements. And surely from the patient’s and family’s perspective, private rooms are preferable. However, one must ask the pesky question of the return on such an investment in this era of much needed fiscal restraint in medicine. If the same outcomes of reducing the spread of infectious organisms can be achieved with merely adding sinks, this may be a less drastic and more immediately feasible intervention well worth considering.

Marya Zilberberg is founder and CEO of EviMed Research Group and blogs at Healthcare, etc.