With the advancement in healthcare and technology we are able to greatly extend the life expectancy of the population. For the healthcare provider that means that more elderly patients and patients with multiple chronic medical conditions are being admitted to the hospital. Some “complex” patients require a multidisciplinary approach with the involvement of multiple consultants.

As a primary attending physician for the patient you often have to deal with contradictory or even conflicting opinions from your consultants.

Sometimes, the decisions are pretty easy. For example, the patient who underwent a recent cardiac catheterization with the placement of a drug eluting coronary stent is being admitted with a massive gastrointestinal bleeding. The bleeding source is a gastric ulcer with a visible vessel. The gastroenterologist requested to stop Aspirin and Plavix that were given to the patient after the cardiac procedure. The cardiologist insists on resuming both medications as soon as possible to protect the coronary stent from clotting. Your role is to negotiate with the consultants the appropriate timeframe for resuming both medications. The timing will depend on the patient’s condition and the absence of further bleeding.

In other cases the management decisions might not be so clear-cut. A very recent encounter made me think about the contradictions in medical practice. 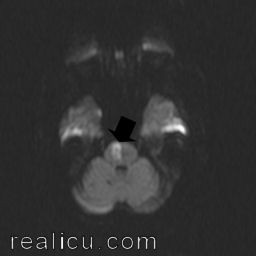 67 year old female presented with dizziness, nausea, left sided weakness and difficulty speaking. The clinical diagnosis of brainstem stroke was confirmed be the findings on the brain MRI. (See image above with the arrow indicating the site of the stroke in the right pons). 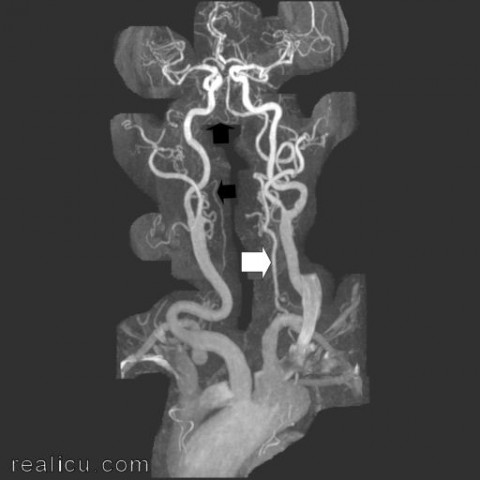 The consulting neurologist suspected vertebral artery dissection as a possible cause of the vessel occlusion leading to stroke. The patient was started on anticoagulation, Heparin infusion, per the neurologist’s recommendations.

On Monday morning a different neurologist saw the patient and made completely different recommendations. According to the second neurologist, this was unlikely to be a dissection, but rather an anatomic variability in the size of the vertebral arteries. The Heparin infusion was stopped and the patient was started on Aspirin.

You are the primary attending physician and it is your responsibility to ensure that the patient gets the best treatment for her condition. The most important question to ask yourself is: if the change in medical management compromises the patient’s safety and health.

The review of the literature revealed that yes, indeed, the patients with a suspected vertebral artery dissection are often being treated with anticoagulation. Several favorable outcomes were reported in the literature. Yet, there are no randomized studies available to confirm the benefit of this therapy for the patient with the vertebral artery dissection.

Considering somewhat equivocal results of the imaging study (dissection vs. anatomical variation) and the absence of firm evidence to support the use of anticoagulation, the decision was made to change the medical management according to the rounding neurologist.

There are two questions to consider while navigating the path of contradictory medical opinions. Number one is always what would be safer for the patient – do no harm first. Number two is what would offer more benefit for the patient. The second question is often harder to answer. That is why we consult specialists in the first place.

How medical residents should spend their time off