Recently, we marked the 66th birthday of Medicaid, the jointly funded but State-run program that supports health care for the poor. Medicaid plays a huge role in selected populations: 70% of nursing home inhabitants, 56% of low-income children and 42% of adults, and 44% of people living with HIV/AIDS all have their health care paid for by Medicaid. Medicaid is much talked about these days, and the reason is of course the state of the Federal finances.

For a few years now, one keeps seeing threatening graphs such as this one (where Social Security, Medicare and Medicaid eventually eat up the entire revenue: 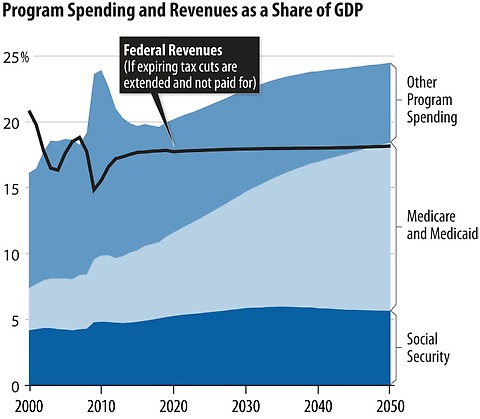 From this chart it’s clear that Medicare and Medicaid (14 and 11% of the current health care costs, as calculated by CMS and me) in its current form are unsustainable programs if there will be no cost control or even not cuts or if the tax rate will not change (or, of course, a combination). See the chart of the GDP versus Federal government spending; while the GDP curve is almost exponential, with a little bump around 2008-9, the government spending curve is relatively flat: 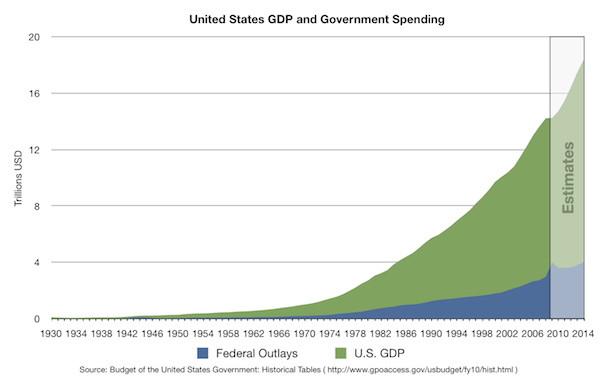 One should bear in mind that the entire U.S. health care system has been outpacing the general inflation, with the medical consumer price index being around 2% higher than general inflation averaged out over the past 30 years. So relevant question in the debate would be: What parts of Medicare and Medicaid are providing good value, compared to the rest of the U.S. health care system?

While both Medicare’s and Medicaid’s enrollment (47 and 50-58 million, respectively, in 2010) and costs are projected to increase, Medicare’s cost have historically always increased a little faster. This might change in the future, according to a new Health Affairs article, where absolute Medicaid growth outpaced Medicare, but absolute growth of the entire system was projected 1.1% greater than general inflation. Nevertheless, per-capita costs might roughly grow at the same rate or even lower, and at their baseline, Medicaid beneficiaries’ cost might be closer to privately insured, with Medicare’s per-beneficiary higher due to age and other factors. Keep in mind that these absolute figures due to enrollment will always be highly volatile especially in these uncertain financial times (since the begin of the last recession Medicaid added approximately 15% of enrollees).

I’ve written about the Dartmouth Atlas’ analyses on Medicare variation. The July issue of Health Affairs contained a study by Gilmer and Krocknick on the geographic variation of Medicaid costs (they varied more than three-fold: $5,000 to almost $17,000, between States for Medicaid-only beneficiary). The authors also found that these difference can largely explained by volume of services per capita.

Back to the question where the best value might be: there will definitely be high-quality low-cost regions, as in the Medicare system. I personally expect that differences between regions will be even larger, both in terms of quality and cost, than in the Medicare data. One reason for this might be, that States run their Medicaid programs slightly differently. Another reason are the different enrollment rates (Sommers and Epstein in a New England Journal article from last November).

From the providers’ perspective, Medicaid patients do not provide value. While they might help shoulder some of the fixed cost, many hospitals claim that they are losing money on Medicaid patients (Medicaid payments are mostly lower than what Medicare pays, while private plans usually pay higher rates). From the governments’ and even the societal perspective, Medicaid is hence a bargain compared to insuring all Medicaid beneficiaries privately. However, there is a current discussion that Medicaid beneficiaries face decreased access, watch this exchange between Representative Bill Cassidy (R-LA), he himself a doctor, and Secretary of Health and Human Services Kathleen Sibelius (here’s the New England Journal article that they mention):

Finally, tackling the small proportion of “high cost” beneficiaries in Medicaid, Medicare and those eligible for both programs might be the best shot we have. In 2002, according to Kaiser Family Foundation’s Medicare Chart Book, just 7% of Medicare beneficiaries were responsible for more than half (53%) of Medicare’s expenditures. If we give these folks a medical home with better care coordination between the many providers that these multimorbid patients have, we might able to even save some money.

The different ways hysterectomy can be performed