So, here we are, between a Medicare rock and budget hard place.

Costs are clearly a problem. Our healthcare system is the most expensive in the world. Take a look at the 2003 figures from the Kaiser Family Foundation. Per capita costs, in 2003, in the US were $3,394 above those of the UK. 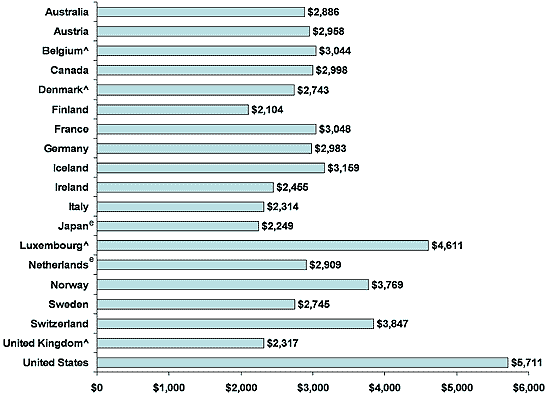 We need to work on the costs. That’s clear.

But how do we do keep things moving in the mean time? The policy wonks love the airplane analogy: trying to fix healthcare is like trying to work on a jet engine while in flight.

Julie Rovner, reporting for NPR, highlights the challenges doctors are up against as the result of the budget and potential Medicare cuts:

Doctors face an even bigger problem. They’re already looking at a 29.5 percent pay cut next Jan. 1 unless Congress acts to change it … but to fix the doctor pay problem will cost more than $300 billion. Industry consultant Laszewski says that just digs the hole deeper for the supercommittee working on the deficit issue.

The question then becomes, where is the $300 billion in excess costs? Without doubt there is waste in our system. Although not all costs are bad. With the high cost of also comes some decent quality. The Commonwealth Fund reports:

Compared with [five other major] countries, the U.S. fares best on provision and receipt of preventive care, a dimension of “right care.” However, its low scores on chronic care management and safe, coordinated, and patient-centered care pull its overall quality score down.

Important to note, the Commonwealth Fund report implicates the challenges of access to care as a key contributor to the chronic scores. With nearly 90 million uninsured in the US, its hard to manage acute conditions before they become chronic. There is a lot of that $300 billion in cost right there.

Let’s say this pans out as NPR (and many others) predict. Doctors will have a few choices, among them:

1. Take a pay cut. Yeah, its a little more complex than that – they have to downsize practices, maybe lay off staff, its not pretty, but it’s an option. The Association of American Medical Colleges says the average debt for medical school graduates is between $150,000 and $180,000. Right out of the gate, many physicians are in the hole. We have this image of doctors as highly paid – largely accurate relative to US median salaries – and very affluent. Some specialties do facilitate affluence, perhaps justifiably (I want my surgeon well paid!). In many cases the take home pay of primary care, internal medicine and family physicians is not quite as high as one might think. For example, the median before tax take home pay for family physicians in the Mid-Atlantic region is $140,000; take out taxes, school loans and cost of living .. see what I mean?

2. Stop seeing Medicare patients. Right now, in 2011, Medicare covers 47.6 Million Americans. The average annual spend per enrollee is$303,000. So when some fraction of those 47.6 Million are unable to see a primary care physician or specialist who no longer accepts Medicare, what happens? Do they end up in the hospital where the cost of treatment is considerably higher? Does that drive the per enrollee spend up and in turn push medicare deeper into insolvency? There is a healthy amount of speculation baked into that scenario, but it is well worth consideration. By the way, the vast majority of hospitals in this country cannot cover costs on Medicare reimbursement and Medicare makes up around 50-60% of business for hospitals.

If the same is true of physicians – I don’t have the figures for physicians, but they cannot cover costs, ceasing to see Medicare patients may actually be advantageous to them financially.

3. Doctors can cut some costs – what are these costs? The limited understanding I do have is indirect costs of care are considerably larger than the direct costs of care. Costs to Medicare, in particular have many drivers. According to Kaiser, the largest costs come from hospital care – a seriously complex system in its right. How can doctors, constrained by budgets, reduce those costs? They can help reduce medical errors and length of stay – we are seeing those tends now, thankfully. They can use less expensive supplies (i.e. put the squeeze on suppliers who are making record profits). They have some recourse, to be sure. Still, these are things that have a long time playing out.

I’m not sure what the answer is. The budget crisis is real and Medicare cannot afford to keep spending at the current rate; no arguments there. But, it takes a while to squeeze costs out. Remember the jet engine in flight? What happens when the budget puts the squeeze on the physicians? What will their first reaction be? Is it to cut direct costs and downsize a practice, or take a personal pay cut? The hope is reducing costs will help entice physicians to become more cost conscious. Hey, it may work, but not before a last ditch effort is made to save the jet engine from flaming out first.

Nick Dawson is a health care administrator and bridges the gap between healthcare operations and social media.  He blogs at NickDawson.net.

Being a doctor takes a toll

The problem of hospice in nursing homes