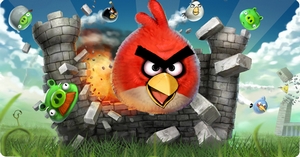 Joe Frisch is a staff scientist at the SLAC National Accelerator Laboratory at Stanford University. Dr. Frisch writes: “I wonder when we will start seeing really addictive games banned? I don’t know what makes games addictive though. Angry birds is a mystery to me – there is no ongoing story line, you don’t really gain any abilities as the game goes on, so WHY DO I WANT TO SMASH THE PIGGIES? Isn’t there some sort of conditioning to fix this – electric shocks or something?”

I’m now on Level 4-19 of 2. Mighty Hoax. It took me days to finish Poached Eggs. Am I losing my mind? I am way too old for this. I’m slinging virtual animated birds while I leave ClinkShrink to cure the criminals of this world and Roy to index our book. What has gotten in to me?

So I want to write a post about the psychology of Angry Birds, but I need to start with a disclaimer. I haven’t tried many video games. My experience is limited, and the few games I’ve tried, I’ve liked. I was once a very accomplished Tetris Player. But with limited exposure, it’s hard for me to say why Angry Birds is more compelling than any other game.

But I’ll take a stab at it. Please feel free to add your thoughts.

1. There’s the challenge of trying to smash all the Piggies. Practice helps: the more you play, the better you get. It takes a little while, especially at first, but there is this enormous sense of accomplishment when those piggies smash– especially if you don’t use all your birds and get an extra 10,000 points/leftover bird.

2. The games are short. you move through one and then can go on to the next. So there is variety to the difficulty and landscape. Each scenario has different birds: the black bomber guys who explode are my favorite. The red do-nothings are my least favorite. The gray guys who divide into three would be better if they were more powerful. There’s an option to buy some eagle guy, but I haven’t done that. It’s challenging, but not impossible. Okay, I did watch some YouTube tutorial videos like the one I embedded here, but only for the first level.

3. Each game can be won with 1 to 3 stars. This allows the game to accommodate the player’s personality. You can proceed with just one star. To me, that feels like getting a C and I was never happy with C’s. At the same time, if I needed to get 3 stars on every single game, I’d never eat or sleep, so I’m content to get 2 or 3 stars on each game, depending on how impossible it seems. Joe and Igor tell me they both move on with 1 star wins. I wonder what Roy would do with this.

4. It clears my mind and occupies my time in a relatively angst-free way. It’s what I imagine that other people get out of TV, but most TV shows feel like work for me. They don’t hold my attention and I have to make myself pay attention.

5. It feels important. That’s really crazy, isn’t it? I had the same sense with Tetris.

6. Somehow, I don’t feel the least bit guilty spending hours of my day doing this. Hopefully that will change if I’m still at it in a few weeks. I typically am very efficient with, and protective of, my time, and it seems like it should be fine to devote some time to pure, mindless entertainment. I suppose the question is how many years and at the expense of what? So my kids have had to order pizza every night for the past week—is that a problem? They like pizza…

7. Empathy? I’m supposed to feel empathy during video games? I’m a psychiatrist … I empathize all day long. I don’t care about the birds or the little green piggies. They aren’t real. And I had no empathy for the falling geometric shapes in Tetris. Maybe you’re spending too much time in that accelerator, Joe.

8. Shock treatments for video game addiction? Hmm .. we could do a study here. I don’t think we’d get past any research review boards if we proposed ECT as a treatment for video game addictions (ah, it didn’t make it past APA as a diagnosable psychiatric disorder, for one thing), but I imagine we could do a before and after survey of people having ECT for depression to see if their coincidental interest in Angry Birds changed with treatment. Get me the funding and I’m there.

9. Let’s talk about the anger. Are the birds really angry? The human player flings them at the structures in an attempt to vaporize the green piggies. So who’s angry: the birds, the human player, or is anger even part of this equation? Joe tells me the piggies are evil. They steal eggs. I haven’t seen them steal eggs. They just sort of sit their in their structures, waiting to see if the birds will vaporize them. I would contend that there really isn’t much emotion of any kind involved here on the part of the animated little players. Would the game be as good if the human was flinging colored balls rather than birds? If the object of destruction were a plate or a star or a non-green-piggy object? I think so.

Consider the cost when choosing a medical school

Getting insurance to cover a test requires guessing the diagnosis