Debates over resident autonomy are nothing new. Informed patients are sometimes reasonably concerned about just how much responsibility for their care will be delegated to their doctor’s trainees. Care within academic medicine, especially acute inpatient care in a public system, can and does sometimes mean going a whole admission without meeting the attending physician presumably responsible for your care as a patient. At least in my limited experience. This as a fact even as we progress towards more resident supervision.

The quality of care teaching institutions and residents provide versus community care is a mixed bag by the literature. You may be aware of the dreaded July effect.

Yes, that open femur fracture is an emergency for the orthopedic surgeon but not quite of the same nature as that massive epidural hematoma. 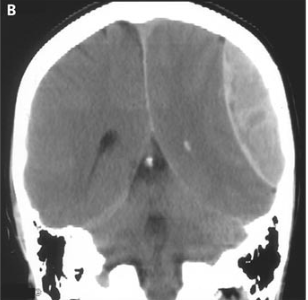 A coronal recon of an epidural … that’s not good

A Level I trauma center has, at a minimum, an upper level general surgery resident in their fifth year of training, and more likely an attending trauma surgeon, triaging all the trauma that comes in. But as a surgical subspecialty often the first “neurosurgeon” to see a patient suffering serious neurotrauma is a lower level neurosurgery resident. A not unlikely scenario is an intern, a neurosurgeon in training who less than a year ago was still in medical school, who serves as a conduit between the patient with the head or spine injury and the attending neurosurgeon or between the patient and an upper level neurosurgery resident who then communicates with the attending neurosurgeon.

And therein lies the uniqueness.

An attending trauma surgeon is standing at bedside as a patient with an peritoneal visceral injury needing an exploratory laparotomy and he makes that determination right there without any filter. But to operate on a subdural hemorrhage is informed by what a junior neurosurgical resident reports.

Hey chief, sorry to wake you, I’ve got an 88 year old man who presented status post a fall from his wheelchair at his nursing home five hours ago. He’s got a large right sided subdural. I’m measuring it now and it’s about a centimeter and a half and he’s got nearly two centimeters of shift. His basilar cisterns are already gone. Per report his right pupil was fixed and dilated at the scene. He’s an hour out from intubation and paralytic and sedation and he’s GCS 3T and he’s 5 millimeters on right and non-reactive and 3 millimeters on the left and sluggish and I’m not getting any corneals or cough.

Hey chief, sorry to wake you, there’s an 88 year old man with a right sided subdural status post a ground level fall. He’s got pretty significant shift. He got succ when EMS intubated him and I’m not sure if it’s worn off or not. Right now he’s GCS 3T, he’s anasacoric with his right pupil at 5 millimeters and nonreactive and with his left at 3 millimeters. I don’t get any corneal reflexes but that might be the paralytic. I understand he was pretty independent prior to this. Do you want me to wait and see if the paralytic wears off or just get the operating room moving now?

And that filter the in house resident provides matters I’m convinced.

That’s not to say I’ve ever seen this process lead to what I consider inappropriate patient care but it is certainly a heady responsibility for the in house resident to present the uncolored facts. And it is certainly something to think about when considering the level of resident responsibility, especially with acutely injured patients.

Colin Son is a neurosurgical intern who blogs at Residency Notes.

Tips to make the most out of your national medical meeting