I recently had the opportunity to go to the anatomy lab and help the first years go through the pelvic anatomy.  What a blast!  There is nothing like dissecting a cadaver to tune up one’s surgical anatomy skills, and helping young eager medical students through it is a great experience.

Prior to going into the lab, I spent many hours going through Netter’s atlas to brush up on the anatomy so I could accurately help the medical students.  Its amazing what one can learn reviewing what one used to know.

1. The small vessels we like to cut at cesarean have names, and we can avoid them

Everybody that does cesarean deliveries knows that there are small vessels in the path of entry that sometimes get cut, but not everyone knows what they are called.  So for the record, the small vessels in the subcutaneous fat that get cut are superficial epigastrics (most people know this one) and the vessels that sometimes go during the lateral extension of the fascial incision are ascending branches of the deep circumflex iliac artery.  One can see that these ascending branches lie between above the transversalis muscle but beneath the obliques, which explains why sometimes taking the fascial layers separately allows one to miss them.  I’ve always felt that the routine sacrificing of these vessels was a surgical faux pas, and knowing this anatomy helps one to avoid it.

2. The small nerves we like to cut at cesarean have names, and we can avoid them

Most patients that have cesareans notice a area of numbness above their incision that can last for months or even a year.  This is because there are several nerve cutaneous nerve branches that are often violated during a Pfanenstiel entry (the preferred method for a cesarean delivery.)  These nerves can be injured in two different parts of the entry.  During the extension of the fascial incision laterally, the anterior cutaneous branch of the iliohypogastric is in the strike zone, and if the incision is low enough, the ilioinguinal nerve is also in danger.  During the separation of the fascia from the rectus midline, the anterior branch of iliohypogastric is again in danger, but this time as a vertical band that goes from the belly of the rectus to the underside of the fascia.  Similarly, the cutaneous branch of T12 is in danger, but closer to the midline.

The non-surgeon audience may be horrified that these structures get damaged during a cesarean, but the surgeons know that small cutaneous nerves are often severed in surgical entry despite the best of intentions.  That said, understanding the anatomy allows one to avoid them with greater frequency.  For example, note how the anterior branch of iliohypogastric runs between the fascia of the external and internal obliques before it perforates the rectus fascia, and that it is running at the interface between the internal oblique muscle and its aponeurosis.  Even though the fascia may be opened wide enough to get to this nerve, with a little care one can visualize it and avoid it.  Similarly, if one takes care as the rectus fascia is dissected up off the midline one can preserve the neurovascular bundles of the distal iliohypogastric and T12.  If all these nerves are preserved, there should be no postoperative incisional numbness.  Its doable more often than not if you try.

3. The path of the arcus tendineous fascia pelvis

Every OB/GYN knows that this part of the anatomy is pretty confusing, and that the magic of urogynecologists is that they really understand it.  This is one of those things that I just really had confused.   The arcus is actually the aponeurosis of the levator ani (puborectalis, pubococcygeus, and iliococcygeus) and the obturator internus muscle.  The levators travel down off the arcus around the rectum and back up to the other side, while obturator internus comes down off the inside of the pelvis, bounces off the backside of the arcus, and then down and out onto the femur.  Arcus is the center of the connection of three structures – the obturator internus and its fascia, the levator ani, and the anterior vaginal wall.  Understanding this finally led me to better understand the idea of a paravaginal defect, which is that it is a separation of the anterior vaginal wall off the arcus.  Effectively, if there is a paravaginal defect, one could put a hole through the lateral vaginal mucosa and put a finger through that hole until they hit the pelvic peritoneum.  With the paravaginal connection to the arcus intact, a lateral dissection would run into the arcus before it got to the pelvic peritoneum.  We can also see how the arcus ends in the ischial spine, giving one a better idea of where the end of the paravaginal defect will be.  Oh, you urogyns get to have so much fun. 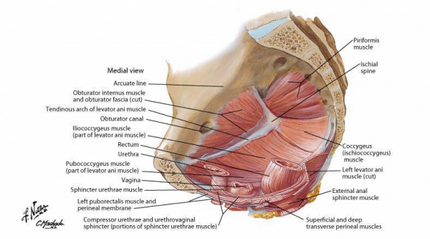 4. The medial umbilical ligament ends at the anterior hypogastric artery

Every OB/GYN dreads the day that they have so much bleeding at a cesarean that they have to consider a hypogastric artery ligation.  Some have even decided ahead of time they they aren’t comfortable enough with the retroperitoneal anatomy to do it, and if they are in that situation they are going to do a hysterectomy.   I was kind of in between until recently, but dissecting a pelvis really got me back into a comfort zone that would let me do that hypogastric dissection if I needed to.  One of the big pieces was the realization that the medial umbilical ligament running down the anterior abdominal wall is going to end in the hypogastric artery.    This structure is actually an obliterated umbilical artery, and in fetal life it coursed with blood, running deoxygenated blood from the fetus to the placenta.   Before this vessel obliterates, it gives off one or more superior vesicle artery branches to the bladder.

Ultimately this means you can open the retroperitoneum deep to the round ligament, identify the median umbilical on the anterior wall, and bluntly dissect with your fingers down this path to the hypogastric.  From there, one only needs to get distal to the posterior division and ligate, passing ones ligature lateral to medial.  Understanding this anatomy and being able to keep intraperitoneal bleeding out of the dissection, the hypogastric ligation is quite doable.  Its one of those things that most OB/GYNs think of as extremely difficult, but that people who know how to do it don’t think is so hard.  As the adage goes, “everything’s hard until you know how to do it” 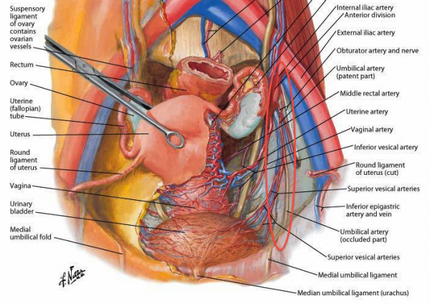 5. Don’t F with the pancreas

Ok, I already knew this.  But looking at the amount of connections the pancreas has to its surrounding structures, it absolutely blows my mind that there are general surgeons that can remove this structure.  The uterus just has a few vessels and ligaments attached to it.  Easy peasy.   But the pancreas is serious invested in everything around it.   It has almost no free borders, many arterial connections, is attached to vascular supply of the spleen, and has a duct system that cannot be disconnected from the duodenum without removing a bunch of of the bowel and rerouting to restore some semblance of function (A Whipple). 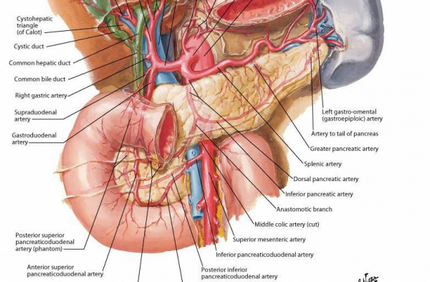 Knowing this, it makes the following video all the more impressive.  In fact I can hardly believe it happening right in front of me.   A Whipple through a laparoscope, with every anastamosis hand sewn and intracorporeally tied.  Incredible.

Nicholas Fogelson is an obstetrician-gynecologist who blogs at Academic OB/GYN, where this article originally appeared.

The power of music at a hospital in Haiti

Pay attention to the color and smell of your urine