Whenever I get asked about how the Affordable Care Act will impact health care, I always say, “look at Massachusetts first.”

That’s because Massachusetts serves as a model for what’s coming ahead for the rest of the country.

As I wrote in 2009, Massachusetts did not provide the primary care infrastructure for near-universal care, which I predicted would drive up emergency room visits.

Sometimes, it hurts to be right.

… when the Massachusetts Legislature made health insurance mandatory five years ago, supporters of the first-in-the-nation law hoped it would keep patients out of hospital emergency rooms.

Patients with insurance, the theory went, would have better access to internists, family practitioners, and pediatricians, lessening their reliance on emergency rooms for routine care.

There is more evidence today that it did not turn out that way.

Three-quarters of Massachusetts emergency room physicians who responded to a survey last month said the number of patients in their ERs climbed in the last year.

Nothing illustrates the primary care problem better than this chart, courtesy of The Incidental Economist: 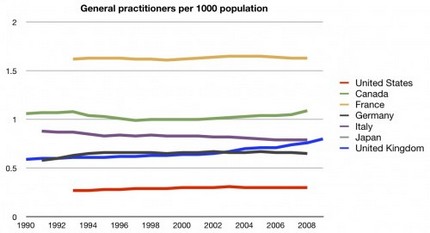 The Affordable Care Act didn’t do nearly enough to expand the number of primary care providers. And yes, I’m accounting for physician assistants and nurse practitioners, who also are swayed by the allure of specialty practice.

Massachusetts already has a primary care infrastructure superior to much of the country, so it’s frightening to think what will happen in poorer states with less generalist provider access.

What’s happening today in Massachusetts ERs will be replicated in hospitals nationwide come 2014.

Alcohol does not discriminate when it destroys the human body

Health reform will drive up ER visits, like it did in Massachusetts
13 comments