A 74-year-old man is evaluated for a 5-year history of gradually progressive dyspnea and dry cough without wheezing or hemoptysis. For the past 2 years he has had pain and occasional swelling in both knees. He has not had fever or lost weight. He smoked one pack of cigarettes a day from the age of 18 to 60 years. He worked as an insulator for 40 years.

His chest radiograph is shown. 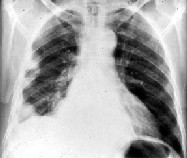 The correct answer is A: Asbestosis.

The diagnosis of asbestosis is based on a convincing history of asbestos exposure with an appropriately long latent period (10 to 15 years) and definite evidence of interstitial fibrosis without other likely causes. This patient worked as an insulator when asbestos exposure was still widespread and is at risk for asbestos-related lung disease. The most specific finding on chest radiograph is bilateral partially calcified pleural plaques. Pleural plaques are focal, often partially calcified, fibrous tissue collections on the parietal pleura and are considered a marker of asbestos exposure.

Idiopathic pulmonary fibrosis presents with slowly progressive dyspnea and a chronic, nonproductive cough. The chest radiograph is almost always abnormal at the time of presentation, with decreased lung volumes and basal reticular opacities. Almost all patients have a physiologic restrictive process (decreased forced vital capacity, total lung capacity, functional residual capacity) as well as impaired gas exchange with a decreased Dlco. However, asbestosis is a much more likely diagnosis in a patient with a positive exposure history and radiographic evidence of pleural plaques.

This content is excerpted from MKSAP 15 with permission from the American College of Physicians (ACP). Use is restricted in the same manner as that defined in the MKSAP 15 Digital license agreement. This material should never be used as a substitute for clinical judgment and does not represent an official position of ACP. All content is licensed to KevinMD.com on an “AS IS” basis without any warranty of any nature. The publisher, ACP, shall not be liable for any damage or loss of any kind arising out of or resulting from use of content, regardless of whether such liability is based in tort, contract or otherwise.

A national license to practice medicine