I’m thankful that I don’t have to research symptoms on the internet, diagnose myself, and come up with my own treatment.  All I have to do is go to my doctor and describe my symptoms.  My doctor can listen to my symptoms, match them up to what he knows, ask questions to pinpoint what might be going on, order appropriate tests, and recommend a treatment plan.

Odds are, when people get sick, that their very common symptoms have a very common cause.  Occasionally problems arise because medical schools teach, “When you hear hoofbeats, think horses, not zebras,” and sometimes doctors interpret this as “zebras don’t exist.”

But zebras do exist.  Good doctors don’t entirely eliminate all thought of zebras when they’re examining patients.  Good doctors recognize that statistics only apply to groups, not individuals (sorry, that’s my math background showing).  The chances that an individual sitting in the doctor’s exam room has a rare condition are 50-50.  Either the person has something rare, or not.  Those are the only two options, and they’re equally likely when you’re dealing with an individual.

The doctor thinks, “Given the symptoms and test results, this could be A, B, C, or D.”  That list of possibilities, arranged from most-likely to least-likely, is called the differential diagnosis.  The ddx is not based on preponderance of all diseases in the world.  The ddx is supposed to be based on how closely symptoms match what is known of various diseases.  For instance, if I go to the doctor because I’ve been vomiting for the past five days and have lost fifteen pounds, the differential diagnosis is not going to include “common cold”  even though colds are indeed quite common.  The symptoms have to match up, and good doctors will consider how closely symptoms match a disease, not just how common a disease is.  Rare diseases belong in the ddx if they could logically be reached based on the patient’s symptoms.

What’s a patient to do, then, when symptoms don’t improve even after we’ve followed the doctor’s recommended treatment plan?

This is where I think patients sometimes make a mistake.  Don’t ignore the symptoms.  Don’t look for a new doctor.  If it’s still a problem, go back to see the doctor again.  See the same doctor – the person who’s already given some thought to what might be wrong. Simply say, “Here’s what I tried, but it didn’t help.  Do you have any other ideas on what I can do?” This can get the doctor to thinking differently about your symptoms/diagnosis.

According to Dr. Jerome Groopman, in How Doctors Think, a good question to ask is, “What else could this be?” (Dr. Groopman is only responsible for that question, not the rest of my strange thoughts on this topic.)

If the treatment for A doesn’t work, sometimes people think, “Well, the first doctor didn’t help, so I’ll find a different doctor.”  A better solution would be to go back to the same doctor so that options B, C, D, etc. can be considered. 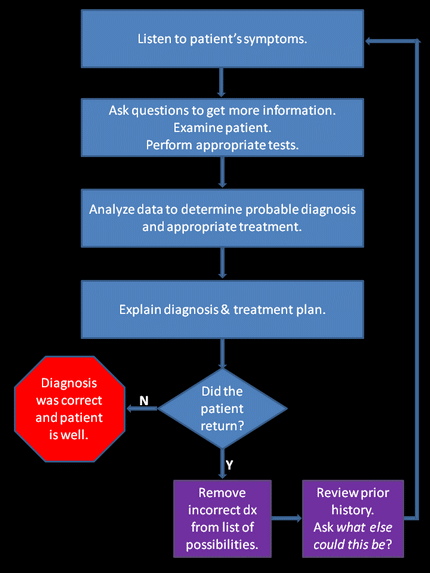 If the patient goes elsewhere, the doctor has no way of knowing that he was wrong.  In the above diagram, his thinking stops in the red box.

Some things are tricky to figure out.  Sometimes doctors miss things and need to take a second (or third) look.  Either the doctor left something off the differential diagnosis, or the patient didn’t think to provide a key piece of information, or maybe the problem is outside the doctor’s area of expertise.

We need purple power.  Don’t let a false “all is well” stand.  Return for a follow-up appointment so that the doctor moves into the purple boxes of his decision tree.  The incorrect diagnosis needs to be discarded.  Don’t give up.  We can ask what else could this be?

Doctors play a role in helping people through transitions with rituals