There is a lot of press about a study recently published in the New England Journal of Medicine that shows that adding tiotropium (Spiriva) to an inhaled steroid might have benefit in asthmatic patients. This study is creating a lot of buzz due to recent concerns of ICS/LABA safety and might prompt doctors and patients to start switching (some already have before this study came out). However, this would be a huge mistake.

The study was a small study of 210 patients that compared the addition of tiotropium (Spiriva) which is a long-acting anticholinergic inhaler currently only used in the treatment of chronic obstructive pulmonary disease (COPD) to an inhaled corticosteroid (ICS), and compared this to doubling of the dose of the ICS or adding the long-acting beta agonist (LABA) salmeterol.

The primary endpoint of the study was improvement in morning peak flow, which they found that adding tiotropium increased by 25.8 liters per minute (P<0.001) as compared to doubling the dose of the ICS. There was also improvement in secondary outcomes such as lung function as measured by FEV1, which showed an improvement of 0.10 liters (P = 0.004). In addition, when comparing adding tiotropium or salmeterol to ICS (the study was designed to show tiotropium was no worse), they found tiotropium slightly better than salmeterol in terms of morning peak flow (6.4 liters per minute (P<0.001)) and not significantly different in lung function (FEV1 difference of 0.11 liters).

With some safety concerns regarding the use of LABA’s, the New England Journal article might tempt doctors to use tiotropium instead of a LABA in asthmatic patients, if the evidence suggests that the benefit is similar between Spiriva and Salmeterol. However, making this leap would be dangerous for several reasons.

1. Almost all the data supports the use of LABAs. This is an intriguing but small study. Clearly more studies are warranted. However, the question of adding LABA’s vs doubling the ICS dose has been extensively well studied. The best source is the unbiased Cochrane Review. Their review included 48 studies (15,155 participants including 1155 children and 14,000 adults). In looking at the morning peak expiratory flow  (the New England Journal article’s main end point), the Cochrane group found that adding LABA to an ICS (compared to doubling the ICS dose) showed a 16.30 L/min improvement from baseline. This is similar to what was found in the New England Journal study. In looking at FEV1, the Cochrane group found an improvement of 0.08 (CI 0.03 to 0.13), which is closer to what was found with Spiriva and much higher than what was seen in the New England Journal study. In other words, in looking at 48 studies with thousands of patients, ICS + LABA performs a little better than it did in the New England Journal study, although it does not clearly beat the numbers of tiotropium.

2. There is no data on outcomes such as exacerbations. A small bump in peak flow or lung function is meaningless if patients are still getting sick. The main goal of asthma treatment is to prevent exacerbations. The New England Journal study was too small to show this. However, the Cochrane review clearly shows that adding a LABA to and ICS, compared to doubling the dose of the ICS clearly prevents exacerbations. They showed a statistically significantly lower risk of exacerbations requiring systemic corticosteroids in patients treated with LABA and ICS (RR 0.88, 95% CI 0.78 to 0.98, 27 studies, N = 10,578) from 11.45% to 10%, with a number needed to treat of 73.

3. There is no ICS/tiotropium combination inhaler (yet). One of the advantages to ICS/LABA combination inhalers is that both medications come in a single inhaler. This is critical. As mentioned, the LABA safety issues seems to occur when patients take LABA’s without an ICS. This makes sense because even though the bronchodilator might make patients feel better, not treating the disease (inflammation) can lead to serious problems down the line. Because of this, the FDA recently recommended that children who take ICS and LABA’s together only take them in the same inhaler. The worry is that if the two inhalers are used separately, patients are at risk of only taking the bronchodilator. Because the bronchodilator makes patients feel better, they are more likely to be adherent to this inhaler than an ICS, which has effects that patients don’t immediately notice. This same concern would be true of tiotropium, which is also a bronchodilator. However, ICS/anticholinergic combination inhalers should be available soon. Studies will be now needed not only in COPD, but also in asthma to see which regimen produces the best benefit.

Bottom Line: This is an exciting study. By showing tiotropium has potential benefit in asthmatic patients, it may give clinicians and patients an additional tool to treat this disease. The study shows that use of tiotropium in asthma clearly warrants more research. However, doctors and patients should not start taking ICS and tiotropium over ICS/LABA, since the data (especially regarding exacerbations) is just not there.

A mandate for vaccines in California

Heart attack symptoms in women, in their own words 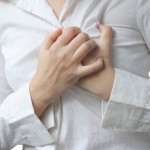 Adding tiotropium (Spiriva) to an inhaled steroid a mistake?
3 comments