Viral upper respiratory illnesses, or common colds, are by far the most frequent illness I see in my office.

It is called the common cold because it is, well, common. I typically can make the diagnosis with a high degree of certainty based on the pattern and the timing of the symptoms. Deciphering cold symptoms and knowing when to worry is what a pediatrician does more often than anything else, and I believe parents can learn how to do this as well. If a parent can get a handle on what a common cold looks like, they can certainly save some co-pays and visits to the doctor. You see, there is no real treatment for the common cold. I know, I know, this is the great failure of modern medicine.

Look at the chart below. Notice when the symptoms typically start and stop. A cold generally starts abruptly. Your child will be fine one day and then sick the next. Their nose becomes stuffy or runny and a cough usually develops. Older children may complain of a sore throat the first few days of the illness. The mucus in the nose will often thicken up and become yellow or green as the illness progresses. Contrary to popular belief, yellow or green mucus does not necessarily mean your child is getting worse. It may in fact mean he is getting better. Colds typically last 10 to 14 days. Nothing, including antibiotics, shortens the duration of the illness. Colds truly must run their course. 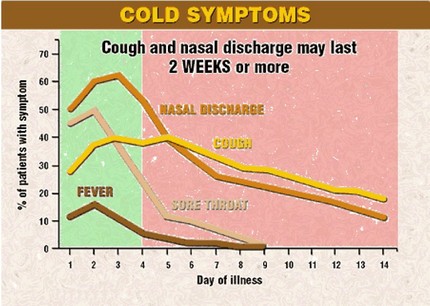 During childhood, your child’s immune system goes to school. Each cold teaches the immune system how to fight future viruses and prevent infection. As your child gets older, he will have fewer and fewer colds. The first couple of years will be full of these illnesses, especially if your child is in daycare. You will feel your child is always sick and something is wrong with him, but an average child in daycare will have about 10 colds a year. If each one last 14 days, well, you do the math.  Your child will have some sort of cold symptoms for close to half the year.