Though I am not going to say that the New York Times lied, they either purposely and grossly misrepresented the truth or did a horrible job of reporting.

In their article, “Diabetes Drug Maker Hid Test Data, Files Indicate” the Times states that Avandia maker GSK “secretly began” a study which “provided clear signs that it (Avandia) was riskier to the heart.”

In fact, the study in question, called study 175, was a small, short study, that had no cardiovascular outcomes (only lipid data) and was not a comparison of Actos and Avandia. In fact, there were no patients taking Avandia in this study! In addition, from pages and pages of documents, the Times took an out of context comment about the study (a GSK memo which read that study 175 shouldn’t see the “light of day”) to make their charges sound even more damning.

The New York Times should be above this kind of sensationalist journalism.

Let me give you a breakdown of study 175, why it was done, what it showed, and most importantly how this relates to the need for comparative effectiveness. You can read the official GSK statement about study 175 here, or look at the data yourself, which comes from a letter to the FDA from Senator Grassley.

Both Avandia (GSK) and its competitor Actos (Takeda) came out around the same time in the late 90’s. Both were insulin sensitizers or TZD’s, a new class of drugs for diabetes; a disease which hadn’t seen any new drugs in a while. Not surprisingly, the two companies with their respective products were pretty competitive. The Takeda drug reps were usually quick to point out that though both products improved diabetes control, Actos did a better job on lipids.  The Actos people were able to make this claim because in their studies, Actos lowered triglycerides or fats by about 9% and in the GSK studies, Avandia didn’t have much of an effect on triglycerides.

This is a common tactic used by drug reps and breaks a cardinal rule of evidence based medicine: you can not compare products across studies, because in each study the populations and circumstances might be different. The only real way to make a comparison is in a head to head comparative trial. (This point remains very relevant, because the recent FDA advisory committee somehow concluded that Actos was safer than Avandia without one head to head trial.)

One way to find out would be to do a head to head study comparing Actos to Avandia in patients with similar cholesterol and triglyceride levels. GSK could have certainly done this, but what would happen if the GSK study proved that Actos did indeed work better on triglycerides? Before spending a substantial amount of time and money on a study that could ultimately hurt the company, GSK did study 175 which looked at lipid levels in patients taking Actos who started with relatively normal cholesterol levels. Though they compared this to historical Avandia data, this was not a true head to head comparison, but likely enough information to tell them whether or not to proceed with the head to head.

I have pasted the main results from study 175 below (though you are welcome to go through the entire 158 Grassley letter). What you can see is that the higher dose of Actos dropped triglycerides about 16 points (or about 10%) and Avandia at the higher dose raised triglycerides by about 11 points. Study 175 also showed that Avandia raised the LDL or bad cholesterol by about 10%, where Actos didn’t have any change (advantage Actos) and that Avandia raised HDL or good cholesterol by about 4 points (roughly 10%), whereas Actos didn’t really raise the HDL (advantage Avandia). Given that these results might put Avandia at a competitive disadvantage, GSK decided not to publish their findings and did not to go forward with the head to head study. Thus, the company did not secretly hide data that Avandia was dangerous (as Grassley and the Times suggest). Rather, GSK chose to not to publish an Actos study that didn’t make Avandia look any better.

Now you might argue (am I am guessing that this is Grassley’s point) that since Actos did better with triglycerides and LDL cholesterol than Avandia, that this shows Avandia might pose a cardiac risk. In fact, many have argued this as the very reason that Avandia seems to show safety signals in meta-analyses and Actos doesn’t. However, time and time again, surrogate markers have shown us that they don’t translated into outcomes.

First, all diabetics should be on statins, so these minimal changes in lipids seen by both TZD’s probably don’t matter clinically. Second, both the FIELD trial and the recently published lipid arm of the ACCORD study showed that even if you treat diabetic patients with medicines that truly lower triglycerides (fenofibrate), it doesn’t reduce heart attacks. Furthermore, though there are only a few studies in diabetics showing raising the HDL decreases heart attacks, even Dr. Steve Nissen in his PERISCOPE trial that showed Actos to reduce plaque build up compared to the older sulfonylurea drug, suggests this may have been due to the HDL effect.

In other words, if HDL is more important in preventing heart attacks in diabetics than triglycerides, maybe Avandia is the real winner of study 175. Though I am not going to suggest (similar to the Times and Grassley) that study 175 showed Actos to be more dangerous to the heart due to Avandia’s HDL benefit, it is clear that study 175 does not show in any way, shape or form, that Avandia is more dangerous than Actos.

However, if you still feel the public has a right to know all the data (which is a valid point), GSK didn’t just “hide” the data; they had an obligation not  to publish it. GSK (and every drug company) is a for profit business. Though they have an obligation to patients to make safe and effective products, they also have a fiduciary obligation to their shareholders to make money. Similarly, though Toyota has an obligation to warn the public about any safety issue with its cars, it can not publicly declare that their Sienna minivan has fewer cup holders than Honda’s Odyssey minivan. Nor should Starbuck’s need to announce that in a blinded taste test, most people preferred the cheaper McDonald’s coffee. In all three cases, share holders could sue the company.

The main problem is that the majority of pharmaceutical studies are done by the pharmaceutical companies. The purpose of these studies are to get their drug approved for initially for availability on the market and eventually use in other indications. In 2005, pharma spent nearly $40 billion in research. This dwarfed the entire NIH budget that year of $28 billion dollars, and the NIH does very little research on drug therapies. You can’t have your cake and eat it to. If you want unbiased studies, and if you want science and not marketing to determine what studies get done, then someone besides the industry is going to have to do the work.

Indeed, it is rare that industry published head to head studies. In some cases, such as Merck’s ENHANCE study which showed its expensive product Vytorin to be no better a reducing plaque buildup that its recently generic simvastatin, the company lost big time. Use of Vytorin decreased dramatically, and Merck’s stock plummeted. In fact, the TIDE study comparing Actos to Avandia (which the FDA advisory committee approved to go forward with 19 to 10), only got started in the first place because the FDA mandated that GSK do this study. Ironically, in this Avandia “win” from this past week, GSK is footing the bill for TIDE, spending millions while sales of Avandia will likely plummet. If we had comparative effectiveness research in place back in the 90’s the TIDE study would likely have already been completed and we would know with 100% certainty whether there was any TZD risk for heart attacks and any difference between Actos and Avandia.

This is why comparative effectiveness research is so important, and why it is a much needed improvement that came out of the recently passed health care reform bill. The health care reform act included about $500 million for a Patient-Centered Outcomes Research Institute to do comparative effectiveness research. The funding builds on about a $1 billion dedicated to comparative effective research from the stimulus package. However, though an important start, $1.5 billion over the next decade is a drop in the bucket compared to the funding needed to answer important clinical questions about which medications are best in which patients. One possibility would be to have industry and government partner in such a way that the industry kicked in with only limited input into the research, which would also absolve them from their fiduciary responsibility to their shareholders. Other agreements could include more data transparency and independent analysis of drug company sponsored studies before publication.

The recent Avandia hearing with its media sensationalism from the Times and politicking by folks like Grassley and insiders within the FDA shows that when science, politics and media mix; patients lose. Not only is more transparency needed in both the FDA and the industry, but we have not been wise to allow industry to foot the bill for most of our research on therapeutics. Comparative effectiveness research provided in the health care reform bill is a start, but is grossly underfunded for what is really needed. 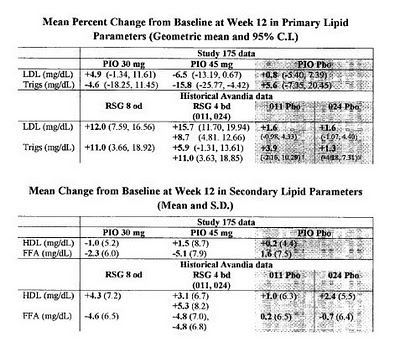 Why total body scans are a scam

Avandia, Actos and behind the scenes of study 175
2 comments