An excerpt from Laugh, Sing, and Eat Like a Pig. 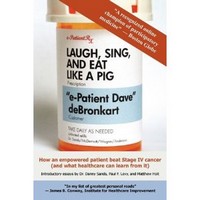 Last month Dave deBronkart, known on the internet as “e-Patient Dave,” released his first book, Laugh, Sing, and Eat Like a Pig: How an Empowered Patient Beat Stage IV Cancer (and what healthcare can learn from it) (www.LaughSingBook.com).

It’s his personal cancer story – excerpts from the journal he kept on CaringBridge.org in 2007 – interwoven with blog posts about how he later discovered the e-patient movement and became its best-known blogger and spokesperson. Today he’s a frequent participant in Washington policy meetings and speaker at industry conferences.

But this post has nothing to do with policy. As Dave worked on the book he realized a new chapter was needed, something he’d never blogged about but which confronts thousands of newly diagnosed cancer patients every day: the very real prospect of death in the foreseeable future. Here, in the first excerpt published anywhere from Dave’s book, we present that chapter. It appears in the storyline just before treatment begins, with median survival 24 weeks.

Before the story continues I want to lay the emotional foundation. First I looked death squarely in the eye. Then, regardless of the odds, I chose hope.

Reflecting on these days later, my wife Ginny had these thoughts:

We could see that the cancer had spread. We were both sort of silent, in our own worlds, thinking about the possibility of him not being there. We had a few nights of crying.You have to talk honestly about how you feel every day. We’re sort of silly people anyway, so it wasn’t a stretch to continue to be that way. He loves to do plays on words. It wasn’t hard for me to fall into that pattern. We all die someday. We want to have the best time we can while we’re here.

We thought, well, if there are only 6 weeks or 18 weeks, let’s live it. We checked the wills, the power of attorney. Dave took on the fight. I would support him any I way I could.

People who’ve faced imminent death share a certain awareness. If you’ve just joined those ranks, welcome. You should know, some of us live through it, and some don’t. You will be one or the other.

In my most desperate moments one question gripped my mind: “What can be said that will make any difference?”

I vividly recall realizing it was over. In my speeches I talk about realizing I’d never see my daughter’s children, and they’d never know me. I talk about lying awake that January night, realizing my memorial service might be a few months away. Would it be May? September? What would the weather be like that day, as people gathered?

My father’s memorial service was fresh in my mind, so my thoughts were vivid. What would my mom’s face look like as she said goodbye to her son?

I’d had some preparation for this moment.

In my 40s for some reason I took an interest in aging and death. In the library I’d found recordings of Harvard psychologist Richard Alpert, an associate of Timothy Leary; Alpert went to Tibet, found a guru, and took the Sanskrit name Ram Dass, “servant of God.” In “Approaching Death” he cited a tombstone inscribed,

As I am now,
so you will be.
Prepare yourself
to follow me.

He talked about ministering to many people as they went through this final transition during the AIDS epidemic, and more years working in hospice. Somehow his words rang with wisdom for me as he combined the perspectives of Harvard, ancient Egyptian scriptures, and modern practices of Tibetan monks, often expressing them with the humor of a New England Jew.

My musician sister Suede was a similar influence closer to home. Like Ram Dass she had worked with AIDS patients during their final passages. (Her first album includes the deeply moving song “The Ones Who Aren’t Here,” which was written during the AIDS epidemic.) “Everyone deals with this differently,” she said. “There’s no right way.”

When I realized I was in that state their words came to mind. “Death soon” was so real that I asked my doctor what it would feel like at the end. He thought I meant pain, so he assured me I’d be kept comfortable. I said no, I was thinking about the passage itself: “What will it be like at the end? Will my lungs shut down so I’ll be short of breath? Something else?”

I was prepared to let my experience be my experience, expecting nothing, with nothing wrong: my feelings would be whatever they were, and I would stay mindful.

Terry Wilson, a member of my ACOR kidney cancer group, told me of “radical acceptance,” a concept discussed by Dr. Marsha Linehan. It combines western cognitive-behavioral techniques (altering how we look at things) with eastern practices for mindfulness, distress tolerance and acceptance. Radical means complete and absolute. And that’s the space I found myself in: “All right, this is what’s so. Let’s get to work.”

Acceptance of one’s situation, seeing it as it is, doesn’t mean giving up. To the contrary, it gives one a firm place to stand, attached to reality, with no energy-sapping resistance. Here’s the point of view I came to.

At a Christmas party in 2008 I met a kidney cancer specialist from another hospital, a marvelous grandfatherly Greek. We talked about hope, and he said he’s changed his answer when patients ask if they’ll get better.

And he adds, “Just one thing: if we succeed, you must drive carefully. We don’t want to save you and have it wasted!”

You don’t have to survive, you know. You may decide you’ve had enough, now is your time, and you choose to let go.

Or, you can choose to try everything. Or try until you’ve had enough. To me the question is, do you have something worth living for? A future worth living to see? If so, let’s get to work.

Hope is a resource. A real, scientifically verified resource.

Jerome Groopman MD’s excellent book The Anatomy of Hope: How People Prevail in the Face of Illness cites evidence from well controlled experiments: when challenged, patients’ bodies perform differently based on their minds’ expectation.

We’re not just talking about their experience of pain – scientists measured substantial difference in their physiological response, comparable in strength to a drug. Dr. Groopman calls hope “a catalyst in the crucible of cure” and concludes, “There is an authentic biology of hope.”

Movingly, he describes decades of being with patients as they faced probable death, and his journey as a physician learning to help them deal with it. Today he writes:

Hope, unlike optimism, is rooted in unalloyed reality. … Hope acknowledges the significant obstacles and deep pitfalls along the path. True hope has no room for delusion.

Clear-eyed, hope gives us the courage to confront our circumstances and the capacity to sumount them. For all my patients, hope, true hope, has proved as important as any medication.

I’ll repeat: hope is now science, not speculation. If you don’t believe it, read the book.

He says hope has two components – belief and expectation. I’ll paraphrase it: when you believe there’s no hope, your biology shifts: it’s as if your cells give up, your system gives up; your body doesn’t do as well as it could if it had hope.

Being scientific about the unknown

Science can get arrogant, saying “If we don’t have evidence for something, don’t believe it.” But there’s another saying: “Absence of evidence is not evidence of absence.” History is full of things that were true long before science figured it out. Consider:

And hope was doing what it does – whatever that is – before the experiments Groopman cites. Perhaps it’s related to how PNI (psychoneuroimmunology) works: thoughts (psych) measurably affect the nervous system, which measurably affects the immune system.

Reality is what it is – whether we know it or not

This is the first instance in this book of a recurring theme:

Reality is what it is,
regardless of what we think
and whether we know it or not.

There may be pathways to recovery that science hasn’t found yet. And one of them might have your name on it. Or not: how would I know? The point is that there’s a world of undiscovered reality, and not a soul can tell you something won’t happen. They can tell you it’s bloody unlikely, but they can’t say never.

Besides, what are you going to do when science runs out of answers? That’s the world I live in. My oncologist, Dr. David McDermott, told me my odds of a relapse were 50%, and we have no way to predict the outcome.

I went home and thought … and I wrote a post about evidence-based medicine. It began:

“On the fringes of medical knowledge, lives are at stake and medicine doesn’t have the answers yet. What do you do?”

“We came to give you hope”

My best friend is a rigorous and deep-thinking scientist named Dorron Levy. He’s a former co-worker, a brilliant guy who now lives in Israel. When he learned of my diagnosis he shared my login for my PatientSite [patient portal] with his brother, a leading physician in Israel, who read my data and told him I was basically screwed.

Dorron’s family was shaken, and as described in the last chapter, they visited for a long weekend. It was costly: four short-notice plane tickets, hotel and all. And since at the time I still had the financial stress of owning two houses (I had just moved back to the Boston area from Minnesota), they insisted on buying all our meals.

I recently said to him “You must have felt you were coming to say goodbye.” He replied, “Nothing could be farther from the truth. I was certain you would make it. We came to give you hope.”

Hearing this from a high priest of evidence made my jaw drop. He said, “Dave, in physics right now there are two contending factions – reductionism and emergence. Reductionists want to eliminate all confounding variables to get repeatable results. Emergence is the study of what tiny influences lead to new patterns as the chaos unfolds.” His action in “giving hope” was an injection into the chaos.

In 2009 my oncologist, Dr. McDermott – one of the best scientists in the world for this disease – capped it off, saying “You have an incredible life force that everyone who worked on your case was aware of.”

Amazed, I thought to myself, “Where’s the evidence for that?” But his word’s good enough for me. Until you decide it’s your time to go, don’t give up hope. You have no idea what might happen.

And so, we began treatment. First, remove the diseased kidney.

Laugh, Sing, and Eat Like a Pig: Facing death, with hope
17 comments