Bret Michaels is in critical condition from a subarachnoid hemorrhage. 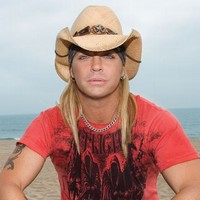 I’ve been watching Celebrity Apprentice recently, and he comes across as a genuine person who, of course, has been raising awareness for Type 1 diabetes. As most people know, he has battled various diabetic complications on the show, and recently underwent an emergency appendectomy.

Details are sketchy, but this is what’s being reported:

A spokeswoman for Michaels confirmed a report by People magazine that the 47-year-old musician was rushed to hospital overnight with an excruciating headache.

Doctors diagnosed a massive subarachnoid hemorrhage, or bleeding at the base of his brain stem.

“(It) will be touch and go for the next few days while he is under intense observation,” the source told People.

About 30,000 Americans suffer from a subarachnoid hemorrhage annually, which is caused by a ruptured brain aneurysm. Most patients are around 40 to 60 years old and risk factors include high blood pressure, smoking, and alcohol use. Drugs like cocaine, appetite suppressants and cold remedies that can raise the blood pressure also are associated.

There is also a strong genetic component, with up to a five-fold increased risk if a patient has a first-degree relative with the condition.

Sudden onset of a severe headache is the predominant symptom, with the typical patient reporting “the worst headache of his life.” In fact, in those who report such a complaint, a subarachnoid hemorrhage was found in 25%.

Upon arrival to the hospital, a head CT scan is immediately performed. If the scan is negative, yet suspicion is still high for a bleed, a lumbar puncture is necessary to conclusively exclude the diagnosis.

Treatment takes place in the intensive care setting. Any drugs that thin the blood, like aspirin or warfarin, are discontinued. Blood pressure is controlled carefully, typically with the drug nimodipine, which has been shown to improve outcomes.

Then, it’s watching and waiting.

Rebleeding is a dangerous complication after the initial event, 3 to 4 percent in the first 24 hours and 1 to 2 percent each day in the first month, according to the American Heart Association guidelines. Treating the aneurysm that caused the bleed, by surgery, for instance, is the definitive treatment to prevent future occurrences.

This is clearly a grim situation for Bret Michaels, and is especially tragic given the health issues his young daughter has been battling.

All my best to him and his family during this difficult time.

Bret Michaels has a subarachnoid hemorrhage, and what that means
19 comments