There are many tragic questions emerging from today’s massacre at Fort Hood.  The one I’m interested in is why a reportedly mild-mannered psychiatrist, a specialist in disaster and preventive psychiatry no less, would make the decision to open fire on his fellow soldiers. 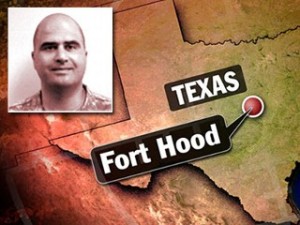 According to the Psychiatric Times, the condition is defined as “indirect exposure to trauma through a firsthand account or narrative of a traumatic event. The vivid recounting of trauma by the survivor and the clinician’s subsequent cognitive or emotional representation of that event may result in a set of symptoms and reactions that parallel PTSD (e.g., re-experiencing, avoidance and hyperarousal). Secondary traumatization is also referred to as compassion fatigue and vicarious traumatization.”

Imagine every day trying to help young men and women somehow put their lives back together despite their night terrors, flashbacks, and chronic sleeplessness. While you reach out to help, they mistrust your every move and respond with hair-trigger tempers, not to mention all the physical symptoms, alienation, and hopelessness. Surrounded by thoughts of suicide–and homicide–you try and keep faith with the honor and challenge of providing care.

But soon the line between their experience and yours starts to blur until, well, something like what happened at Fort Hood today becomes an all too real possibility.

Combined with the fact that he was due to be deployed to Iraq, extremely reluctantly if reports are to be believed, we can surmise that his thought process was compounded an already fragile mental state.

But wait. That explanation may too simplistic, according to Mindy B. Mechanic, an associate professor of psychology at California State University, Fullerton. She says that such an extreme reaction, even in the setting of vicarious traumatization, is unlikely: “They might get depressed or have some emotional fallout from it, but to go on a shooting spree is not part of what happens to people from having to deal with trauma survivors all the time.”

It’s obviously too early to come up with anything conclusive. More will almost certainly come out in the ensuing days.

But if anything, this event brings much needed light to the mental health issues plaguing both soldiers, and apparently, their doctors.

Are nurse unions using the H1N1 flu pandemic as a bargaining ploy?

Vaccines do not cause autism in children, whether or not they have inborn errors of metabolism