Verizon, Motorola, and Google, along with 9 other cell phone manufactures and countless world carriers, have teamed up to provide a smartphone with the power to deliver useful applications for medicine: the Verizon “Droid” smartphone, based on the Google Android operating system (OS). 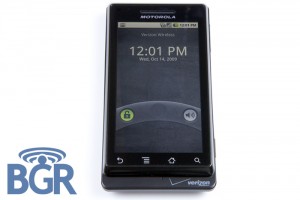 The Droid’s processor is the same processor that powers the iPhone. The main reasons this phone is different is that it has the hardware and software features needed to build and support multitask enterprise software. The phone is equipped with a 3.7-inch touch-sensitive display with a resolution of 854×480 pixels, 16 million color depth, 512mb RAM and a real keyboard . It is also equipped with a Standard mini USB and a 8GB MicroSD memory card. Android supports both CDMA and GSM cell networks.

So, what makes this a better phone than the iPhone for medical professionals? Almost everything.

First, like the Blackberry, it has a real keyboard which most professionals prefer. It also has the touch screen keyboards for quick edits. It provides a standard mini USB connector, unlike the iPhone that utilizes an expensive proprietary 30 pin connector. For medical device connections, the USB is a necessary standard. The MicroSD card provides a much needed facility to back up your application data from the phone and transfer it to another device.

The iPhone currently has no facility to get app data off of the phone except for email which is not acceptable for transferring sensitive data. That iTunes backs up app data is a misconception; it only backs up Apple apps such as iTunes and contacts.

The main difference in the Android phone is the OS. Android was written by Google and released open source. Motorola has embraced this OS and has incorporated it into their entire line of Smartphones. This operating system is far superior to the iPhone OS for enterprise software, mainly because it can run more than on application at a time.

In contrast, iPhone apps are limited to small programs that perform only one function. Here is a real world situation of how an iPhone and Android phone handle a simple problem.

The situation: Doctor is reviewing a Chart on their phone via a Chart app and an incoming call is received.

iPhone: Once the iPhone receives the call the Chart app is stopped and the user can answer the phone. If the doctor wants to see the chart during the call, he/she will have to hangup the call and reopen the Chart app.

Android: When the phone rings, Android suspends the Chart app so that the call can be answered. If the doctor want to view the chart while on the call they just switch back to the Chart app which is at the same place that they left it when the call was received. Note, the call is still in progress.

The next advantage of Android is the OS memory management and what software engineers call “automatic garbage collection.” This is a very important feature that helps keep applications from crashing and having to be restarted. If memory management is left in the hands of the programmer, as it is in the iPhone, and the programmer forgets to release unused memory (i.e. memory of a chart must be release when a chart is deleted), the program will eventually run out of memory and quit.

Programmer memory management takes a skilled software engineer to control. Since most of the apps in the iPhone are for entertainment this is not a huge problem, the user will just restart the app. Medical apps must perform to a higher standard.

Android is a feature rich OS with the power for the programmers to write very sophisticated medical software. The iPhone OS was built as an entertainment platform. They are both great phones but with two different types of applications and audiences. The software developing company has to make the decision which platform their application will be best suited for. There is no “one size fits all” phone.

The customer will, in turn, need to make a decision on the phone based on the software that fulfills their professional needs. For medicine, smartphones based on Google Android seems an ideal fit.

Jeff Brandt is President of Communication Software, Inc., makers of the motionPHR.

Will co-sleeping with your infant increase the risk of SIDS?

Google Android versus the iPhone for medical apps
22 comments