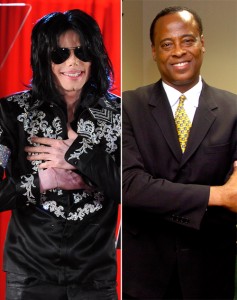 Reports are circulating that the powerful anesthetic propofol, also known by its trade name Diprivan, was found in the singer’s body. According to ABCNews, “the autopsy of Michael Jackson found the powerful anesthetic propofol, as well as several prescription drugs, in his system, and law enforcement sources say that investigators believe their final report will list the propofol as a ‘contributing factor’ in his death.”

Dr. Murray has consistently denied that he had given drugs like Demerol or Oxycontin, but has remained suspiciously quiet about propofol. And indeed, sources say that Dr. Murray administered the drug 24 hours before the singer’s death.

Also of note are the massive quantities of opioid-based drugs found in Jackson’s home, including Methadone, Fentanyl, Percocet, Dilaudid and Vicodin. A chair of a university medicine department notes that, “The list … would be typical for an anesthesia cart in an operating room or what you might find in a recovery room, ICU, [or] ED.”

I wrote previously that propofol is one dangerous drug, and should only be given in monitored settings. In fact, it’s against FDA guidelines to even have it in the house.

It has a high potential for abuse, as “the drug affects two important brain receptors, one of which is associated with marijuana, and the other is targeted by anti-anxiety drugs such as Valium.” Those who take the drug report a feeling of euphoria upon awakening.

In small studies, almost 40 percent of those who abused propofol died from an overdose. As a professor of anesthesiology grimly notes, “the difference between being high and being dead is a cc or two.”

But whether the drug should be classified as a controlled substance, or not, is still up for debate. Despite the potential for abuse, it’s still less frequently cited when compared to benzodiazepines or opioid medications. Even now, many anesthesiology programs do not strictly monitor its supplies.

Perhaps that will change in the midst of all the media attention swirling around the drug, and its unfortunate association with Michael Jackson.

Did Michael Jackson’s doctor give propofol, a possible cause of death for the King of Pop?
7 comments